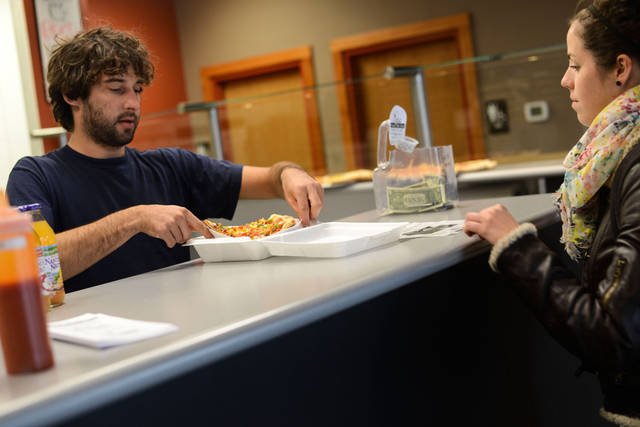 General Manager Wade Kapphahn serves a piece of pizza in a styrofoam box to graduate student Erica Bye at Mesa Pizza in Stadium Village on Wednesday. (Photo by Holly Peterson)

Restaurants may transition from using foam containers to more compostable packages in a city push for sustainability.

Ward 12 City Councilman Andrew Johnson introduced a proposal Friday that would ban restaurants from using polystyrene foam containers and instead have them use “environmentally acceptable” packages beginning next year.

Some restaurants are hesitant about the change because it may be costly and challenging to adjust their shipments. Still, businesses in the University of Minnesota’s area support the switch.

“We don’t love more government mandates, and we’re not sure the city needs to do this,” he said, “but we have been moving away from foam already.”

Sari said she uses one foam container in her café and the rest of the products are compostable. The hardest part of the switch would be changing the restaurant’s shipment orders to align with the ordinance, she said.

The restaurant’s container supplier has a compostable option, Sari said, but the products are more expensive than foam containers of the same size. Sari said she hopes to find an option that’s both environmentally friendly and inexpensive.

Polystyrene, or Styrofoam, is not only harmful for the environment, but it’s also a public health concern because chemicals from the containers can seep into food, Johnson said.

“The fact that these containers leach a nasty chemical into the food is unacceptable,” he said.

If the proposal passes, Minneapolis would be the first Midwestern city to enact such a ban, Johnson said. Dozens of cities in California have prohibited the use of foam containers, and New York City passed a similar ban in December.

Johnson said Minneapolis originally passed an ordinance to ban polystyrene more than a decade ago but didn’t strongly enforce it.

The new proposal is friendlier to businesses and offers them more options, Johnson said.

If businesses don’t follow the new guideline, they would be penalized for an administrative offense, according to the proposed ordinance.

Chris Hansen, who works at Espresso Royale in Dinkytown, said the corporate office decided not to use foam containers, and he agrees with the decision because of the environmental implications.

“If I were a customer, I would certainly appreciate it,” he said.

Minneapolis recycling coordinator Kellie Kish said businesses are less likely to recycle containers made out of polystyrene because they’re mostly air and businesses might not want to pay the shipping costs.

“With how expensive shipping is, it’s not something companies want to do,” she said.

Dinkytown Mesa Pizza manager Nathan Coles said the restaurant uses foam containers when customers take one slice to go. Using different packages would be an easy switch, he said, and most employees agree that polystyrene isn’t the best material.

“As long as the city bans it everywhere, we’re for that,” he said.