Aaron Isaacs, historian for the Minnesota Streetcar Museum, operates a mile- long stretch of streetcar line along Lake Harriet together with other volunteers. Streetcars run throughout the summer. (Photos by Eric Tanaka)

This past fall, street resurfacing crews removed several city blocks of old streetcar rails along Riverside Avenue left behind from its glory days in the early 20th century.

Now, more than a half century since the last Minneapolis streetcar line shut down, politicians are calling for the streetcar to be resurrected, believing it can help spur economic development and serve as an efficient form of mass transit.

The city has already done several studies on the possibility of a streetcar revival. And on Friday, the City Council applied for a federal grant to fund a study looking at the merits of a streetcar along the West Broadway corridor in north Minneapolis to other, potentially cheaper forms of transit.

Still, calls for a streetcar line have grown louder. In his annual State of the City address Wednesday,

“The potential for a streetcar is especially exciting,” Rybak said. “Streetcars buildcommunities, and that’s what we really need in north Minneapolis.” 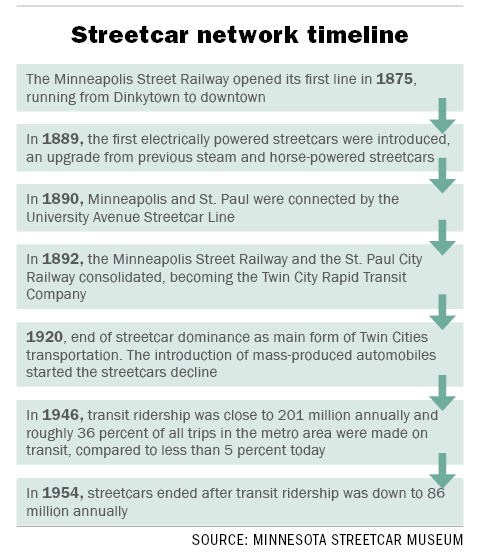 The majority of streetcars in Minneapolis were built between 1870 and 1930, said Aaron Isaacs, a historian at the Minnesota Streetcar Museum and a retired transit planner.

At its peak, there were 524 miles of track, running from Stillwater in the east and Excelsior in the west. Isaacs said these lines helped shape the current layout of Minneapolis by attracting businesses, especially where lines intersected, and influencing future infrastructure design.

He pointed to the appearance of businesses around the intersection of Como and 15th avenues as an example of streetcar lines attracting development.

He also said the Pleasant Street circle by Folwell Hall on the University of Minnesota campus exists because streetcars from 15th Avenue used to turn around there.

In 1920, transit annual ridership was at about 238 million. By 1954, as buses and cars became more popular, ridership dipped to 86 million and service ended soon after.

“What happened with the streetcar in Minneapolis happened all over the country,” Isaacs said. Streetcars survived in several other cities, but most lines ended by mid-century.

But in 2001, Portland started a national trend by rebuilding its streetcar system, and many cities have been following suit since.

The Hiawatha light-rail line, a similar form of transportation that connects downtown Minneapolis and the Minneapolis-St. Paul International Airport and the Mall of America, opened in 2004. 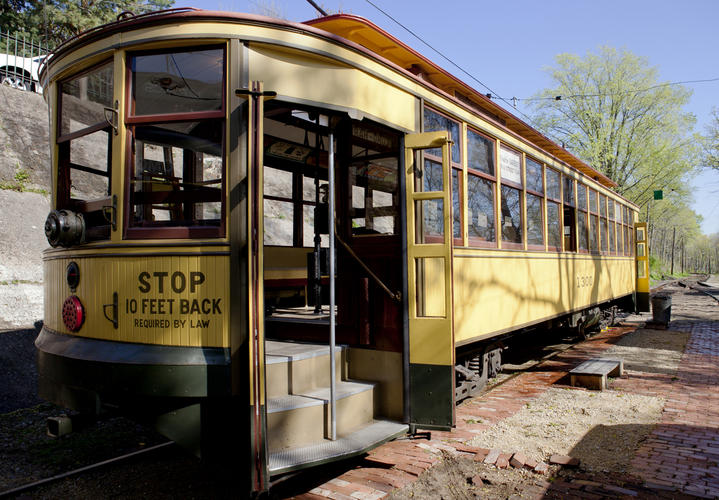 An original streetcar from the early 1900s is docked by Lake Harriet in preparation for trips it will make this summer.

A tale of two transit systems

Currently, there are numerous transit projects being studied in the Twin Cities and surrounding seven-county metro region.

Plans for bus rapid transit lines, as well as numerous rail projects, including multiple light-rail lines and high-speed rail lines, will all compete for federal and state funding — essential for many of these projects to continue.

For supporters of these transit projects, proving that they can spur economic development and that they make fiscal sense will be crucial to gain support from the federal or state government. 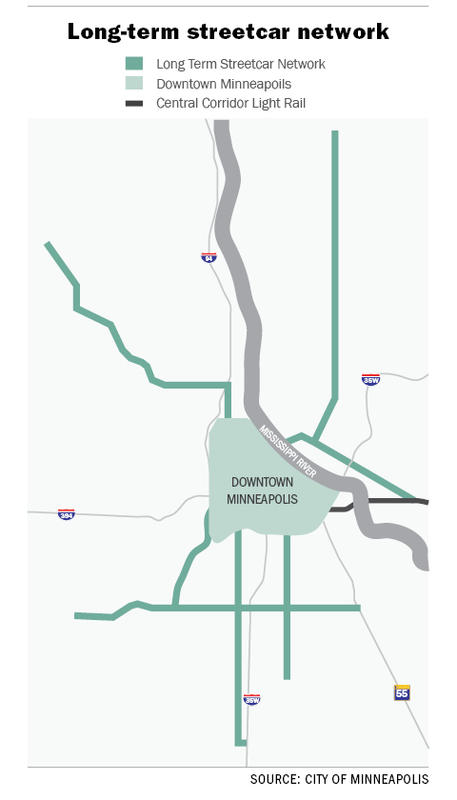 Isaacs pointed to the streetcars’ track record of spurring development as proof that streetcars can be beneficial for the city.

“It’s been proven that there’s something about rail that spurs development … it’s the permanence of it; it’s the higher quality of the ride; it’s the fact that they’re perceived as cleaner and quieter.”

But David Levinson, a transportation expert at the University, said the argument that streetcars will spur significant development is “magical thinking.”

“There is nothing magic about steel wheels on steel rails,” Levinson said. “There’s nothing special about it except that you’ve made some investment that you could’ve made in some other technology.”

One of those other technologies, Arterial Bus Rapid Transit will be the other form of transportation studied if the city receives the analysis study grant from the federal government.

“The most significant changes would be improved stations and specialized vehicles,” Carlson said.

Carlson said traditional buses are actually moving less than half of the time.

“About a quarter of the time, buses are stopped at red lights and about a third of the time, were stopped for people to get on and off the bus and pay their fare,” Carlson said.

BRT would make stoplights change so buses would wait less at red lights and would allow passengers to prepay for tickets.

It would also include upgraded stations, similar to the recently constructed station in the middle of Interstate 35W, which would include more information on bus schedules.

BRT lines in other regions have seen ridership increases of up to 40 percent and have seen 15 to 25 percent faster travel times, according to a recent Metropolitan Council study.

Carlson said costs for the Rapid Bus line would be between $3 million and $4 million per mile, and each line would likely cost roughly $30 million to construct.

According to a 2007 feasibility study on Minneapolis streetcars, it would cost approximately $20 million to $40 million per mile. Streetcar lines would likely only be roughly a mile long. A Rapid Bus line would run several miles.

Anna Flintoft, a transportation planner with the city, said costs have gone up since that study but couldn’t speculate on current costs.

“We still have a lot to do … to really understand the costs and benefits of streetcars relative to bus improvements,” Flintoft said.

Isaacs said he thinks streetcars would “be a great thing to have and would definitely work as a development tool” but said streetcars face too many financing obstacles.

“Right now, I would say this is just one more project fighting for a small and diminishing piece of the financing pie, and I just don’t see it happening,” Isaacs said.

Republicans in the state Legislature have been critical of proposed rail transit projects, making the likelihood that streetcars will receive state funding slim.

“About the last thing north Minneapolis needs is a big vision that goes nowhere,” Rybak said. “And I wouldn’t bring this forward with such excitement if I didn’t see a way to get it done.”