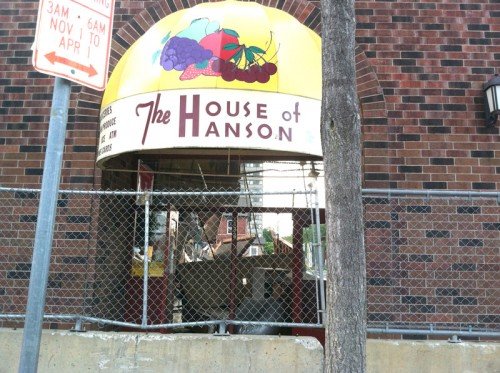 You can feel the pace of change in Minneapolis these days. Cranes perch overhead like crows. It seems each week brings the pronouncement of another new building.

During her campaign, Mayor Betsy Hodges claimed she wanted to see 500,000 people living in Minneapolis by 2025. And unlike most political promises, this one seems like it could come true! Ubiquitous media guru David Brauer recently wrote a column that this goal made him nervous, that the ”sheer pace… is break-neck. Minneapolis would add 108,000 residents in 11 years, double the rate of even the two most recent fast-growth years. And that assumes no recessions.” Though Brauer remains a self-professed member of “Team Urbanism”, he’s not alone in having lingering concerns about the loss of small businesses, new architectural styles, or the loss of parking. Lots of people feel this way.

This week, Minneapolis’ density debate intensified when Councilmember Cam Gordon introduced a new idea for regulating development. The proposal is called “conservation districts,” and you should read all about them here or here or here. Succinctly described, they’re something more flexible than a historic district (e.g. Marcy-Holmes in Minneapolis, or Summit Avenue in St Paul) but with more clout than a small area plan (e.g. the 38th and Chicago SAP). They seem intended to slow down the pace of change in the city, and according to Eric Roper’s Star Tribune piece, would be particularly appealing to neighborhoods like Marcy-Holmes, Prospect Park, and Calhoun/Isles. He quotes city planner John Smoley as saying, “what we envision this regulating would be architectural styles, development patterns, scale, or landscape designs that are common to the district and notable to the district.”

If you want a charitable take on this proposal, look elsewhere. In my opinion this is a bad idea, poorly executed. Other than as an exercise in letting off NIMBY steam, I can’t fathom how Minneapolis can be taking it seriously.

Who Gets a Voice?

The first big problem with the proposed conservation districts are that only property owners have a voice in the process. According to the proposed amendment [emphasis mine]:

After the study, the district would go up for a vote, and if 2/3 of property owners approve, it would take effect. Overall, the population of Minneapolis is about 50% renters, 50% home owners. It should go without saying that as a group, home owners are older, whiter, and wealthier than renters. Right off the bat, this should be troubling. 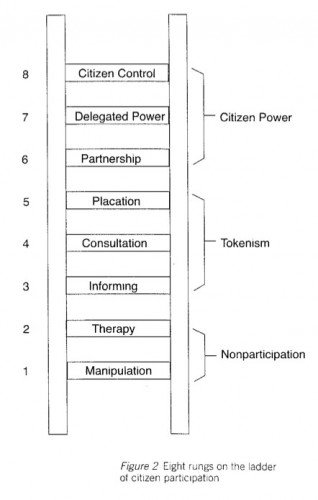 On top of that, renters are already extremely under-represented in existing public engagement processes. For example, homeowners make up 90% of the seats on public commissions. Neighborhood groups already have a poor track record with renter participation. There are lots of reasons for this — renters are more likely to work long hours, move more frequently, have language or cultural barriers, and have less obvious financial stakes in urban planning decisions — but including renters’ voices can be done with effort.

(At the same time, over the years I’ve heard stories from renters, students, and people of color about how difficult it can be to participate in neighborhood group processes. I’ve even heard accusations of intentionally excluding certain groups.)

City planning is extremely complicated when it comes to citizen engagement. It’s very tricky and can be done well or poorly. At best, creating a new level of regulation that automatically excludes half the city exacerbates an already existing problem. At worst, it’s undemocratic and immoral.

The proposed regulation declares its purpose as protecting the visual character of an area. Here’s what it says, at length [emphasis mine]:

599.710. Purpose. This article is established to perpetuate and proliferate the visual character evident in an area’s notable architecture, development pattern, scale, or landscape design by regulating changes to those attributes and adopted design guidelines for property within a defined area. As part of the city’s comprehensive program of historic preservation, it is the intent of this ordinance to promote the use and conservation of notable properties for the education, inspiration, pleasure, and enrichment of the citizens of this city. Conservation districts are designed to not only maintain but also expand the roster of buildings, structures, sites, and objects that contribute to the visual character of the district. The value of existing and proposed buildings in conservation districts is measured by the extent to which they embody the conservation district’s notable visual character. 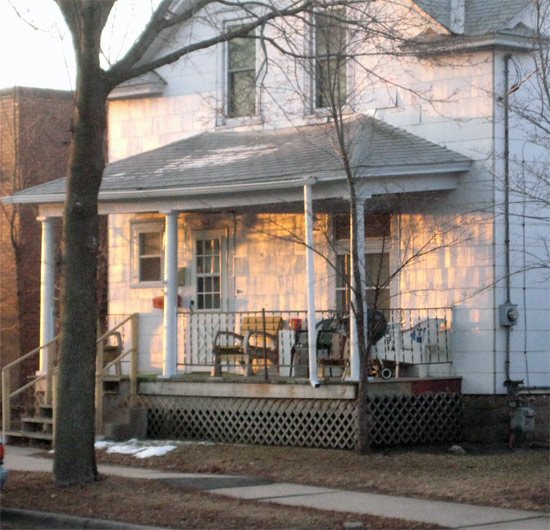 To me, the concept of visual character seems impossibly vague. Are we talking about paint colors? Bricks vs. stucco? Front yard garden maintenance? Cornice complexity? Window width? Couches on porches?

Terms like “visual character” or “quality of life” are never neutral, and are deeply rooted in cultural and generational preferences. To some people graffiti is beautiful; others find it horrifying. In some cultures, front yards are a place to have sidewalk barbecues or bathtub shrines; others prefer to use front yards as tranquil flower gardens. Some people like quiet neighborhoods, others want a thriving restaurant scene. To some, bike lanes are an unsightly scourge; others love them…

These kinds of differences — what you might call the practices of everyday life — can be highly contested. Different practices of everyday life lead to frustration, anger, and people moving out of the city. Clearly we should have some rules about them, but these differences can also make cities exciting, dynamic, and interesting places to live. Do we really want to begin policing “visual character”? 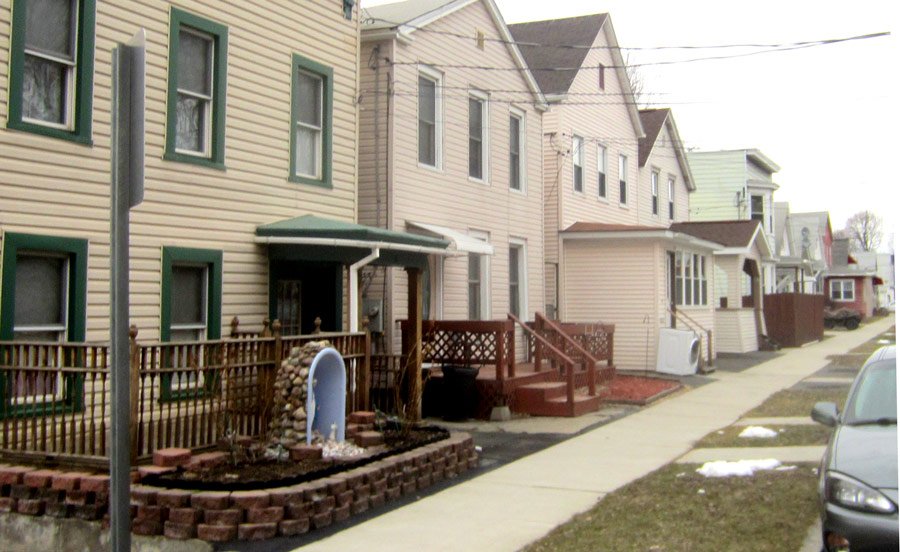 The Racist History of Homeowners Associations 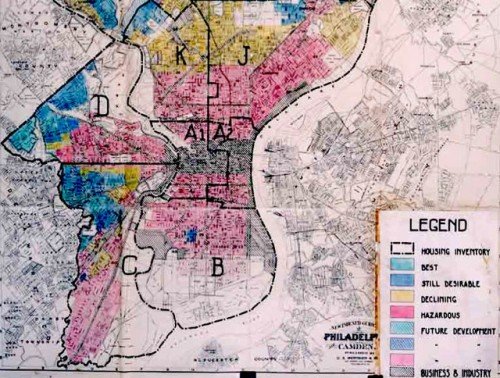 The more I think about this proposal, the more it reminds me of the deeply troubling history of home ownership in US cities. Throughout the 20th century, homeowners associations have consistently attempted to regulate who could live in different neighborhoods. Until the 40s, this was done through racist deed restrictions written into mortgages.*

Right: A redlining map of Philadlephia; Mpls had one just like it.

After that was declared illegal, the practices of homeowners associations became more subtle. Reading Evan McKenzie’s excellent book on the subject, Privatopia: Homeowners Associations and the Rise of Residential Private Government blows your hair back. In it, he writes [emphasis mine]:

In 1947, the FHA was still promoting use of what it called “protective covenants” to guard against “inharmonious land uses.” … Explicit references to race restrictive covenants had by then been dropped after protest, but the agency carefully advocated covenants that would “maintain neighborhood character and values”.

To me, its impossible to look at the conservation district proposal without thinking of this troubling history. “Neighborhood character” has been used as a code for race and class differences for generations in US cities. Home owners and the real estate community have a lot to answer for. If Minneapolis is serious about ending inequality (as everyone seems to keep saying), a new level of regulation exclusively peopled by home owners and concerned with “visual character” is a huge step in the wrong direction.

Who or What Are We Conserving Here? 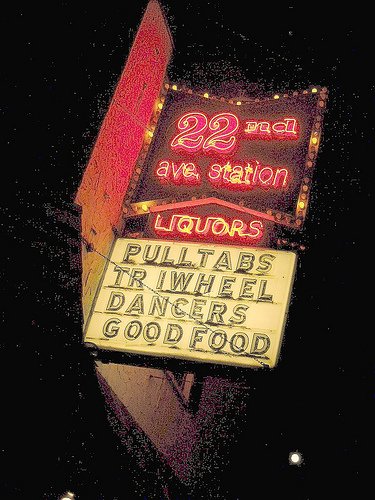 There are other nits to pick. The language isn’t specific about scope or time frame or process for reversing decisions. Actually, to be honest, it’s not specific about much at all.

Here’s a thought experiment. Think of the ugliest building in the city. (Right now I’m picturing the Lake Street K-Mart.) Could you, in theory, create a “conservation district” focused on its “visual character”?

Sure you could. If you can get 1/3 of the property owners on your block to agree about it, then (voila!) you’re studying the new “Lake/Nicollet Surface Parking Conservation District.”

Or how about a strip club conservation district centered around the double-deuce? Even haters must admit it’s chock full of “visual character.”

Our system of city planning already includes lots of layers: local and city-wide elected officials, quasi-democratic neighborhood groups (official and unofficial), block clubs, appointed commissions, and public hearings galore. Sometimes the outcome of this process isn’t what you might like.

I’m sure that the intentions of many of the people pushing this proposal are honest and good. But given our sustainability and density goals, our historic problem with engagement outreach, and our verbal commitments to creating a more just society, this conservation district plan is a terrible idea. It’s hard to believe anyone is taking it seriously.

* Through the FHA, the federal government actively encouraged this kind of exclusive language. The role of the government in creating a racist and unequal social landscape is a story too little told. Differences in access to home mortgages, housing equity, quality schools, and decent housing is one of the huge underlying reasons for the current “achievement gap.”

At top: The House of Hanson getting demolished.