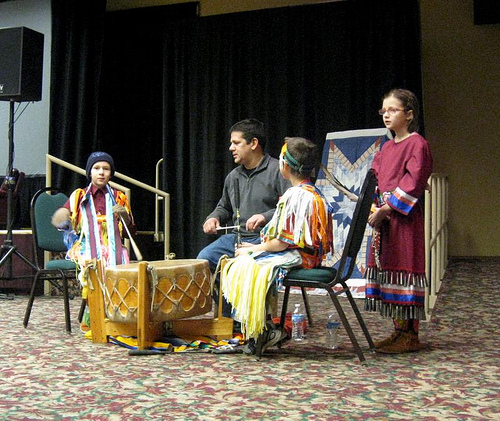 Around 450 neighborhood activists converged at St. Mary’s University Event Center on Saturday for the first City of Minneapolis Neighborhood and Community Relations (NCR)  Community Connections Conference. It was a rare opportunity for people involved in neighborhood associations and related organizations to share experiences, ideas, and strategies.

Building diversity and capacity was the day’s main theme. The conference opened with a keynote address by Angela Glover Blackwell, founder and CEO of PolicyLink, an organization devoted to advancing economic and social equity. PolicyLink organized November’s fourth annual Equity Summit in Detroit, which attracted a delegation of 150 from the Twin Cities, the largest from anywhere in the nation.

Blackwell’s talk and a panel discussion she moderated set the tone for a full day of workshops, “neighborhood café” discussions, networking, and informal conversation. She opened by describing the racially segregated, but economically integrated, St. Louis neighborhood where she grew up during the late 1950s and early 1960s. From that experience Blackwell came to understand the value of community, and that equity means taking responsibility to ensure that everyone is able to meet their full potential.

After reviewing some sobering statistics about social and economic gaps between whites and people of color in Minneapolis, Blackwell pointed out that people of color will make up the majority of city residents by 2040. If poverty isn’t addressed now, she said, the city won’t have a workforce that’s strong and ready in the future. She emphasized that, “The population set to be the middle-class isn’t prepared to be the middle-class.” Borrowing the title of a recent PolicyLink report, Blackwell stated that, “Equity is the superior growth model of the future.”

Fortunately, Blackwell said, the city already has strong infrastructure, funding, and programming in place to address inequities, including a Step-Up summer jobs program, the One Minneapolis initiative, a Promise Neighborhood, and a state law recognizing that youth violence is a public health issue. “Do you realize how many cities would kill to have these things?” she asked the audience.

“You have it all,” Blackwell concluded, “but somehow in the midst of having it all, you’re leaving people behind.” She closed by saying she expects Minneapolis to make the nation proud, “by acting like the black community I grew up in,” and recognizing that “we won’t be strong, if everybody isn’t strong.”

Bringing More Voices into the Room through “Possibility Thinking” (and Fun)

Bringing more voices into the room is an essential part of building the strength that Blackwell described. Ways of becoming more inclusive were explored throughout the day, beginning with the panel Blackwell convened.

Panelist Anita Maltbia, director of the Green Impact Zone in Kansas City, reminded participants to recognize that people are living their lives, working and raising families, and fulfilling other responsibilities. Organizers of community events, she said, must borrow a page from the corporate world, and make events “enjoyable and memorable.” Community leaders must also cultivate “possibility thinking,” Maltbia said, instead of dwelling on “ain’t it awful.” This approach, she said, helps communities better identify and take advantage of their assets.

In response to a question, Tony LookingElk said that that how community needs are framed is essential for funding, too. As a philanthropist, who currently serves as a program officer with the Otto Bremer Foundation, LookingElk has learned that the level of giving increases when organizations talk about possibility and capabilities, instead of making people feel bad about a situation.

The challenges of doing neighborhood work in a society steeped in institutional racism, was a subject Larry Hiscock addressed in describing the hard anti-racism work the Harrison Neighborhood Association (HNA) in North Minneapolis has done during his years as director and lead organizer. Documents from the 1950s reveal that North Minneapolis was identified as a “slum” by planners, while Kenwood was labeled the “Gold Coast.” The slum designation has resulted in North Minneapolis being home to EPA-designated Superfund sites and an impound lot. “Things get dumped in communities of color,” Blackwell observed.

Coming to understand the history and systemic nature of racism, said Hiscock, has deepened connections between residents, helping them address pressing issues, such as the foreclosure crisis. Pamela McClain, an HNA board member, said that over 100 residents have participated in the People’s Institute’s Undoing Racism training.

Several of the workshops that followed focused on strategies which have been used successfully in specific neighborhoods to foster engagement. Representatives from neighborhood associations and community councils in Corcoran, Harrison, Linden Hills, Ventura Village, and Hawthorne Eco-Village gave presentations about some of their efforts and facilitated discussions and activities around anti-racism work, environmental sustainability, safety, and broader community engagement efforts.

Other workshops were led by NCR staff or representatives of organizations that work with specific populations. Addressing the digital divide, engaging underrepresented communities in decision-making around transit-oriented corridors, incorporating human rights standards into neighborhood work, confronting the employment gap, exceeding Americans with Disabilities Act (ADA) standards, and promoting sustainable health programming were topics of other sessions.

Throughout the day, a number of community organizations were on hand to distribute information and talk about their work at tables in an “information booth boulevard.”

Participants React with Enthusiasm and Some Skepticism

Many participants said they were energized by the conference. One person tweeted, “A great time was had at the Community Connections Conference. Made some new connections. Wonderful to see so many interested/involved with community revitalization.” Another tweeted, “Head buzzing after great day.” The continental breakfast provided by Pow Wow Grounds, and lunch offerings from Ali’s Catering, La Loma Tamales, Pham’s Deli, and R.J. Foods were widely praised, both at the event and in tweets.

Peter Fleck, who manages social media and online tools for the Seward neighborhood, including its e-democracy Seward Neighborhs Forum, commented, “It’s great that NCR organized our first Community Connections Conference. It’s very rare that we have the time to discuss city issues with a gathering of neighborhood activists from across the city.” He added, “I hope this leads to more conversations and possibly a coalition of some kind forming to approach City Hall with a single voice speaking to the overall improvement of the city as a whole and not just the individual neighborhoods – especially in the area of equity and social justice.”

Others voiced skepticism and criticism of the City’s role as conference sponsor and organizer. A resident of North Minneapolis’s Harrison neighborhood said that she would have preferred seeing neighborhood activists step up to organize the event. She noted her mistrust of the city’s community engagement process, and questioned who would benefit most from the day-long conference, the participants or organizers. Fleck suggested that, “We, the neighborhoods, could organize the next conference in equal partnership with the NCR.” He also offered that he would be happy to see a more organic, grassroots event emerge, something in the spirit of CityCamp’s “Unconference” held last fall.

NCR staff plans to read conference and workshop evaluations and then produce a report that will be emailed to the 450 participants, outlining next steps, some of which will be implemented as early as next month. Mayor R.T. Rybak, who welcomed the crowd, and NCR director David Rubador and staff, all emphasized the need to continue the conversation, maintaining the focus on inclusion, and building upon the idea that out of many cultures there is “One Minneapolis.”