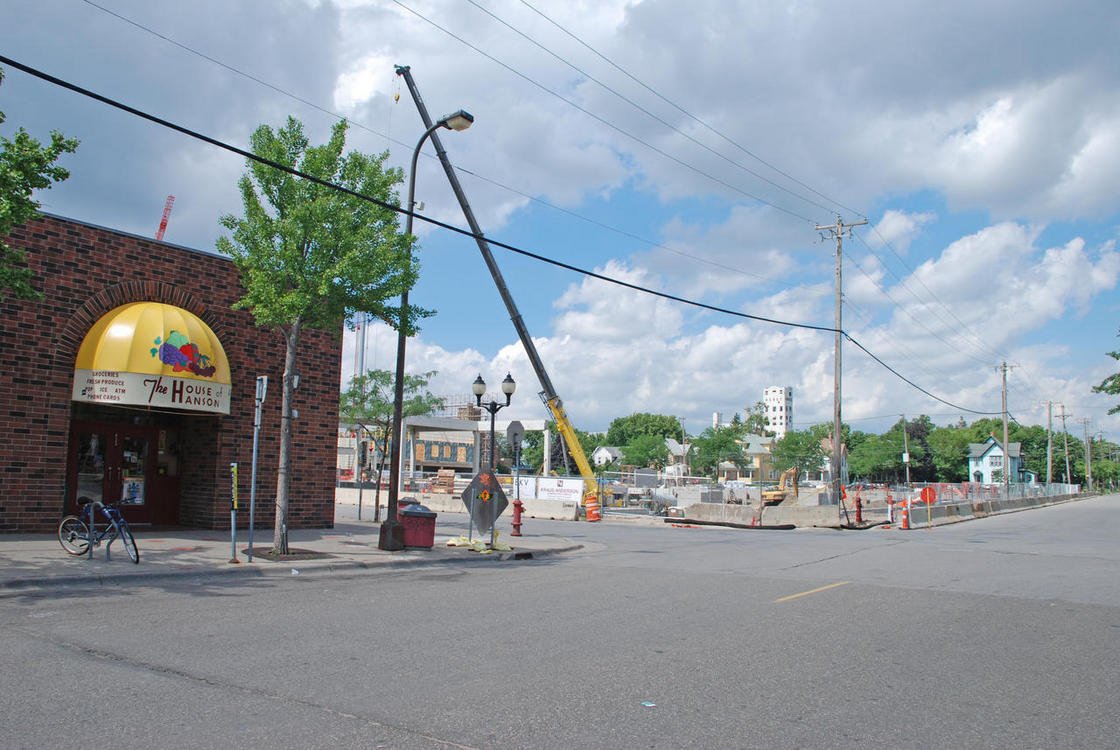 The House of Hanson across Fifth Street from the construction that will yield a much larger Dinkytown grocery store in August 2014. Photo by Bill Huntzicker.

A Minneapolis City Council committee on Thursday, July 25, rejected a plan to rezone a portion of Dinkytown for a six-story mixed-use development to replace the House of Hanson and other businesses.

After the meeting, the owner of the House of Hanson said she may not close on July 31 as she had announced earlier in the week.

The zoning and planning committee voted 3-2 against the rezoning from C1 commercial to C3A that allows mixed-use developments like the Opus six-story proposal. The City Council may make the final decision on Friday, August 2.

“I don’t know what’s next,” said Laurel Hanson Bauer, owner of the 80-year-old corner grocery store founded by her grandfather in 1932. “I have to figure out a way to stay in business until I know. If I’m in business, I make money. If my business is closed, I make nothing.”

Before announcing her plans to close, she said, council members had indicated to her they supported the rezoning that would permit the Opus project that would displace her business.

“Now they’re saying no. Why should there be a delay to improve a parking lot? It totally makes no sense. I feel like people are talking on both sides. I’m just royally frustrated at the moment, as you can probably figure out.

Bauer and Pat Duffy, who owns Duffy’s Pizza, said they felt the city had told them the project would be approved.

Duffy said his two Victorian homes will be developed but, under C1 zoning, he won’t have to make concessions for parking and setbacks that the Opus development could afford to do.

Duffy, owner and manager of Duffy’s Pizza, at 1308 Fifth Street Southeast, will not decide whether to close until after the council action. Casablanca Hair Salon, which was in Duffy’s other building, has already closed.

Bauer was clearly frustrated and uncertain about her store’s future.

“I still have to stay open to survive. I’ve let employees go. There are so many balls in the air this morning that have just hit the floor now. It’s one thing to move a bookstore. You can’t put apples and perishable food anywhere as you can with books. It’s a bit more difficult to close a grocery store than it is to close a bookstore.”

Committee actions could go the next full City Council meeting on Friday, August 2.

Kristen Eide-Tollefson, whose Book House store was evicted from Bauer’s building, helped create the Save Dinkytown organization to stop the Opus development.

Eide-Tollefson said the City Council is out of step with the public and her group will seek a public hearing at the zoning and planning committee.

“I’m not selling my equipment until the development is a done deal,” Duffy said earlier this week. “These houses are two duplexes with tenants.”

He also blamed parking restrictions in the Marcy-Holmes Neighborhood for some of the business decline. Fewer people park there and walk through Dinkytown to the campus, he said.

“We’re taxed at the value of the most commercially successful use of the land. And that’s not surface parking,” he said.

Save Dinkytown advocates, however, say the rezoning will increase property values, creating an incentive for more intensive developments that will take out the small-scale buildings and businesses, paving the way for more chain stores.

“Save Dinkytown decided to focus on the rezoning as the primary issue, since this is what most threatens Dinkytown as a whole,” Eide-Tollefson said. “It gives a green light to developers to ‘redevelop’ Dinkytown, like they did Stadium Village.

The House of Hanson was founded by Bauer’s grandfather Henry Oscar Hanson on October 3, 1932. It was attached to the front of the family home and included an ice cream parlor and soda fountain until the 1960s.