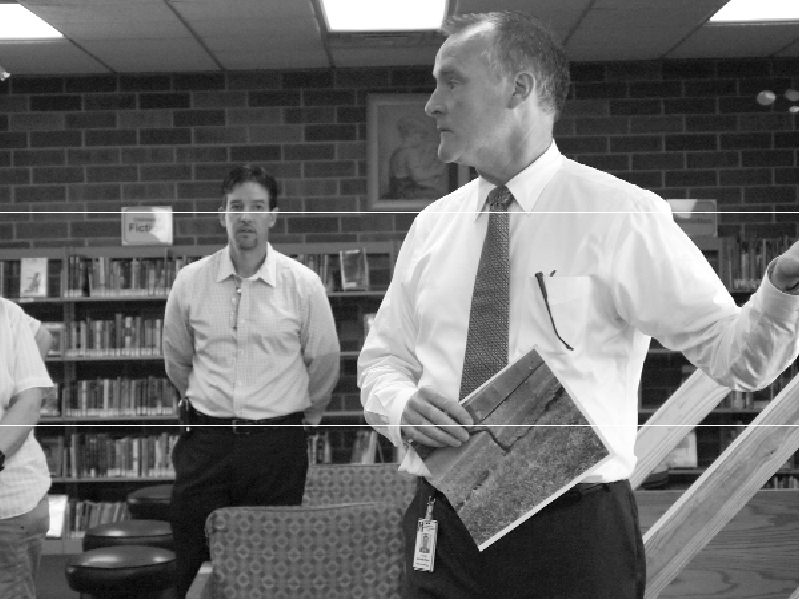 There’s nothing like thinking your building’s going to fall down, to fuel the passions of those advocating to get an entirely new one. And since it takes so much money to maintain a temporary facility, prepare to do without until the new one can be built. We’re talking about Webber Park Library; that’s an impression, not necessarily the final word.

Early in July, several ceiling tiles fell down while patrons and staff webber librarywere in the facility. Gary Peterson said he was there, and saw the guy whose computer they fell on. The area is over the west bank of windows; the metal between the windows shows signs of stress, and there is a widening crack at a corner of the brick at the south end behind the window wall. 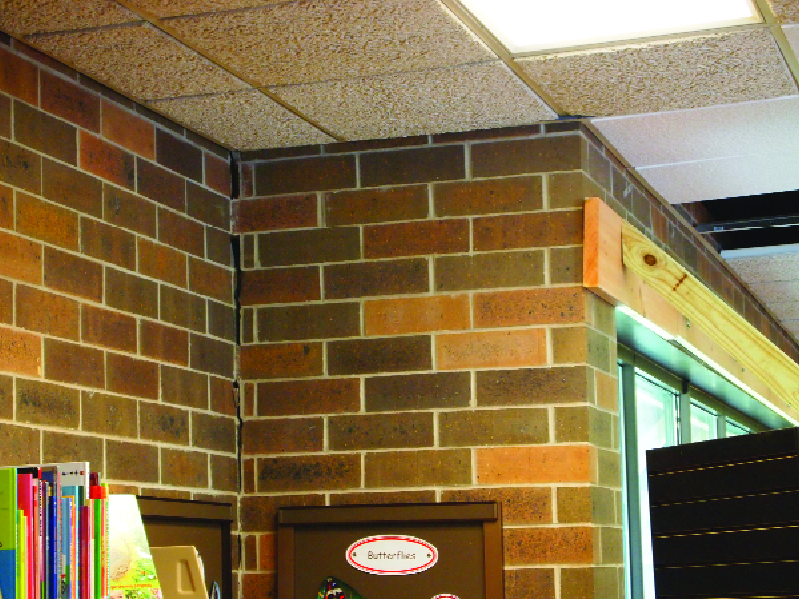 An engineer explained his best assessment during a tour with Hennepin County Commissioner Linda Higgins, a couple of Hennepin County library board members, assorted staff and community members July 18. Jerome Ryan, architectural section Leader for Hennepin County Property Services said he suspects that in a previous repair to the foundation under the window, “they probably did not repair under the corner,” an area that, while structural, cuts further into the library footprint and would not have been easily accessible. It’s likely the wall has detached from the foundation.

There’s no basement at Webber Library, it’s built slab on grade with 48-inch frost footings. Judy Hollander, director of property services, said there was a long-term plan to replace the library, so at the time, the logic may have been not to invest much. 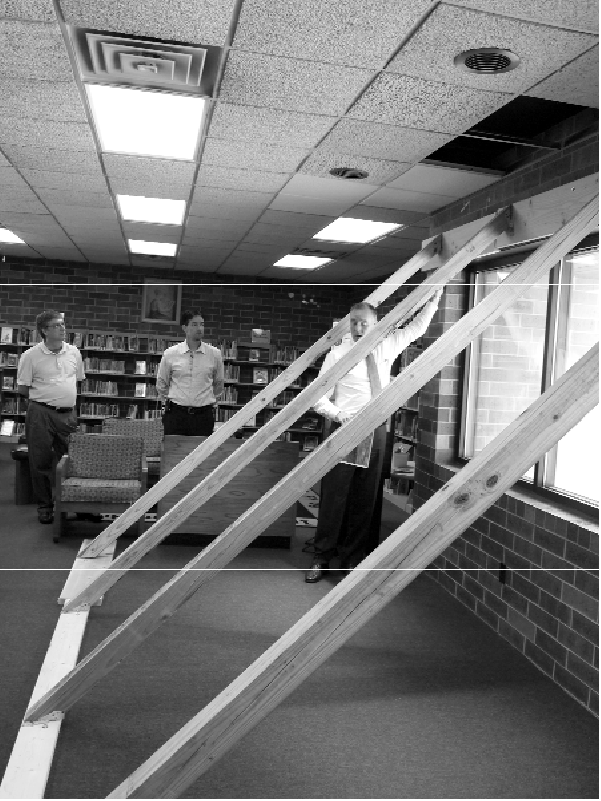 The library is closed until further notice. Four-by-fours prop up the beam area over the window (right). One library board member asked if it would be possible to block off the affected area but reopen the rest of the library. The engineers said there is too much risk that more of the building would fail. They led a tour around the building showing how other foundation areas were showing the same kind of water erosion as the area that failed.

Bill Rodgers, resources division manager, was on hand to tell people that library services such as books on hold had been transferred to the North Regional and Northeast libraries.

Catherine Furnberg said that doesn’t help with the most-used feature of the library, computer use by people who can’t easily travel anywhere else. For job searches especially “which now have to be done on line, can’t the computers be put somewhere, like in the park building, so people can use them?”

Rodgers said he would take that request back to management to see what could be done. In other conversation, officials warned that in some other library replacement scenarios, so much money was spent on temporary facilities that it detracted from the permanent replacement.

The county plans to have structural engineering consultants do soil borings to get a profile of the ground under the failed area. They said they are gaining access to borings done by the park board preparing for the new Webber Park. It could take five to six weeks to complete the analysis and an estimate of the fix.

The engineers and residents alike agreed it’s highly likely that the vibration of the pool demolition, perhaps combined with recent rains, could easily have shifted the subsoils. In this area, “there are some sites that should never have been built on,” said Roberta Englund, staff for the Webber Camden Neighborhood Organization. It was also stated that when the building was built, it was an era when architects did the designs and engineers signed off, rather than engineers doing the designs.

Conversations formal and on the side quickly turned to “this place is toast, can we talk about the replacement?” Commissioner Higgins said absolutely, she would push to restore the funding that was pulled from the project when one property owner refused to sell (near the former grocery store at 44th and Humboldt). There, a library could be more centrally located to the neighborhood, she said, and front onto the beautiful Victory Memorial Parkway.

Kate Petersen, a neighbor who participates with the Friends of Webber Park Library, said her personal view is for the library to be built or expanded to the east of the current site, in an area that the park board hasn’t really programmed yet. “It would give the message that it’s not all about sports, it’s about the brain, too. We don’t want it to be just a picnic area because there would be too much trash generated.” She’d like to see a land swap of some sort, so the county wouldn’t lose what’s been invested in the other site.

Petersen and Fourth Ward Council Member Barb Johnson reminisced about the history book pictures they’d seen of Webber Park and library with the old configuration of Shingle Creek, winding with bridges and meditation walks. This was recommended in a charrette process a while back, too, they said.

“We don’t need for it to be all spanking new, we just want it functional, and open more days,” Petersen said. Webber Library was only open three days a week, she said.

Gary Peterson, who has developed music programming at the library, said there’s a “place-ness” about being where it is, and he would like to see the park board and library board work to have a nice building in the park, with three to four times the computers it now has, and a meeting room. The park is “an incredible amenity.”

Higgins’ staffer Tina Sanz said there would be a community meeting scheduled when there is an update from the engineers. 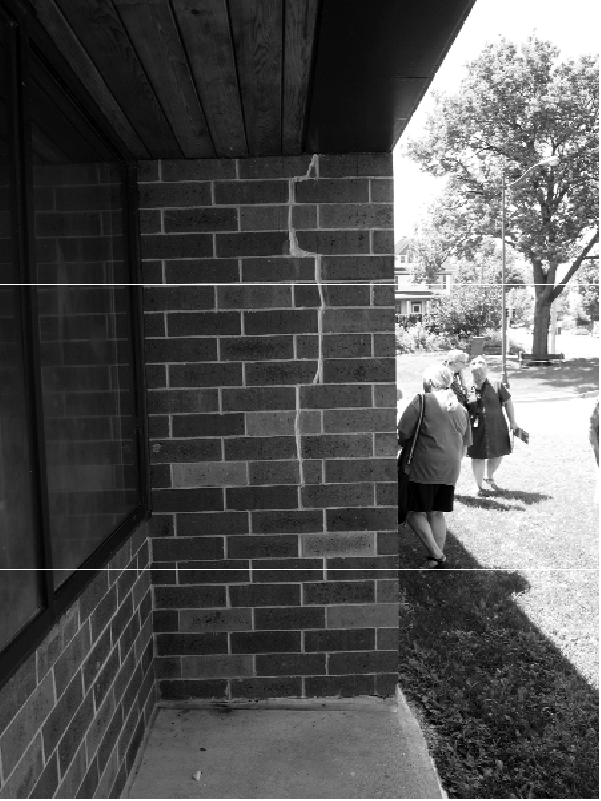 A caulked crack outside of the area that lost its ceiling tiles.