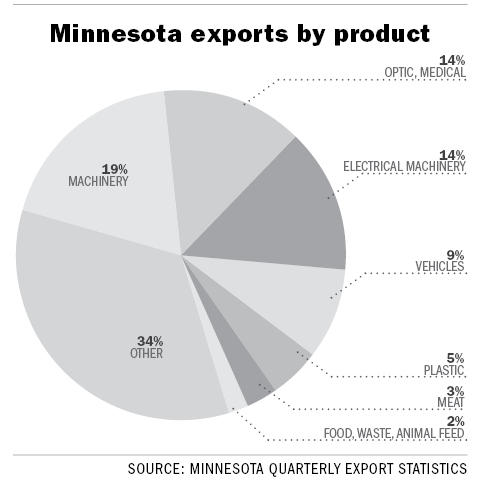 It took nearly a decade for the state of Minnesota to double exports.

Twin Cities leaders, including the University of Minnesota and the city of Minneapolis, are hoping a partnership with the Washington, D.C.-based Brookings Institution will help Twin Cities businesses double exports again — but in half that time.

By educating smaller businesses and connecting them with already established exporters, the partnership, known as the Metro Export Initiative, aims to increase Twin Cities area exports from $17.6 billion in 2010 to $35 billion by 2017.

“It’s an ambitious goal but we think it’s very achievable,” said Kristin Guild, manager of business development at the city of Minneapolis.

The University of Minnesota will also contribute to this effort by helping develop connections within the University to international businesses.

While the Twin Cities area is already the 14th-largest exporter in the U.S., thanks to large companies like General Mills, 3M and Cargill, which are already established exporters, many smaller businesses aren’t aware of the international demand for their product or service, according to a recent report from the Brookings Institution.

To accomplish its goal, the initiative will focus on outreach to raise businesses’ awareness of international demand and connecting businesses with existing resources at the state and federal level.

“If you’re just in the U.S. market you’re subject to any of the price fluctuations in the U.S. and to the way the U.S. is responding to recessions,” said Guild.

She added that 87 percent of growth is going to occur outside of the U.S. in the next century.

Officials are hoping that trips like the one Mayor R.T. Rybak took to Sweden in April 2011, as well as building on current connections, will help businesses to double exports.

“The longer-term, more challenging part of the plan is to develop a network of Twin Cities companies and people that are actively engaged in exporting,” Guild said. “I think it could be a really powerful force if we applied some intentionality and structure around that.”

Abby Pinto, managing director of the Center for International Business Education and Research at the Carlson School of Management, said the University of Minnesota will play a key role in developing this network.

“I can see [the University] really involved with that. I think a lot of the connections will have the University of Minnesota somewhere in it,” Pinto said.

She added that University faculty and students will likely help conduct research and further build the network.

Several University students are already interning with the U.S. Commercial Service, a division of the U.S. Commerce Department, to help conduct market research as part of the plan, Pinto said.

Lee Munnich, a senior fellow at the Humphrey School of Public Affairs, said there are many challenges to the initiative, but the push to double exports will likely lead to several economic benefits.

“Increasing the export base is an important strategy for a regional economy,” Munnich said.