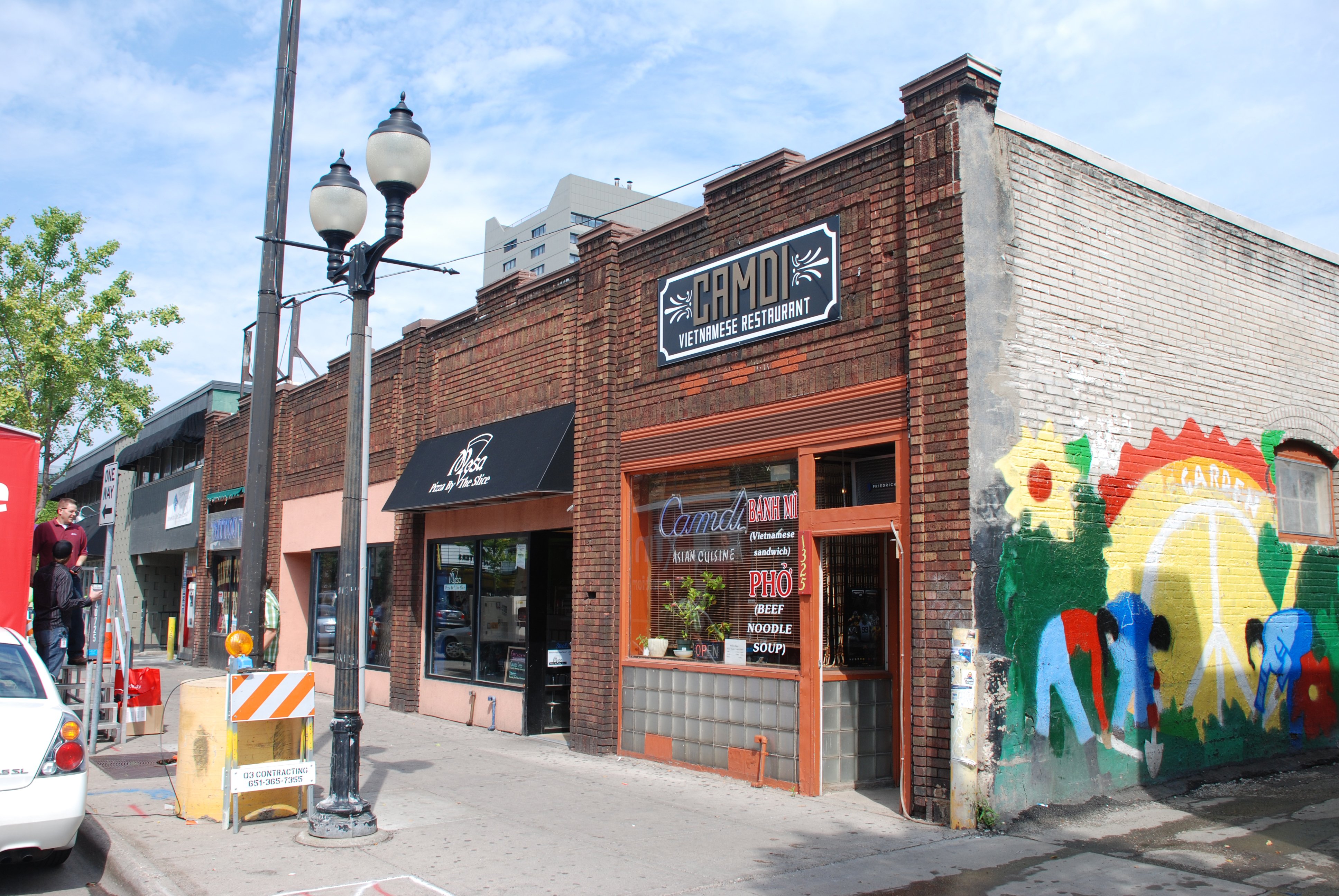 The Minneapolis City Council, with a tie vote of 6-6 on August 30, rejected a proposed moratorium on the four-block core of the Dinkytown business district adjacent to the University of Minnesota.

Council Member Diane Hofstede had proposed the six-month moratorium to allow time for the Dinkytown Business Association and Marcy-Holmes Neighborhood Association to complete small-area plans before new development projects begin. Both associations had endorsed the moratorium.

The moratorium’s failure allows a developer to proceed with plans for an apartment building in the traditionally small-scale business area.

Kelly Doran, who was at the City Council meeting, will continue with a proposal to build a six-story mixed-use building that would replace two buildings that currently house Mesa Pizza by the Slice, Camdi Vietnamese restaurant, and other small businesses. The Doran development would require rezoning from C1 commercial to C3A mixed use.

The plan, which he presented to a committee of the whole of the City Planning Commission Aug. 29, shows commercial space and parking on the ground level and 70 dwelling units, including 130 bedrooms, on the upper floors.

“Dinkytown needs development,” Doran said after his presentation. “If we don’t do this development, Dinkytown will continue on a downward spiral.”

Doran told the planning commission that none of the Dinkytown buildings has a historic designation, but he said he favors preserving Al’s Breakfast, the Varsity Theater, and the former drug store building that houses Loring Café.

Ted Tucker, president of the planning commission, said he invited Doran to present his proposal, but he’d prefer a more informal conversation about the nature of Dinkytown and what his project would contribute to it.

“This is a very complicated area,” Tucker said. “So in a way, I want to ask what you think is the character of Dinkytown, what your new project can capture of that to be a good neighbor in Dinkytown. What is your building doing to enhance the public realm? How is your building helping Dinkytown?”

Tucker and Lauren Huynh, chairwoman of the committee of the whole, raised questions about the building’s height, massing, density, appearance from the street, and interaction with the street.

Doran acknowledged that his building, which is smaller than the Opus Development begun on the north half of the block, does not have enough space to provide the Opus development’s setbacks between the street and the apartments that will rise above the commercial street level.

Sightlines from 14th Avenue Southeast were a major selling point for the six-story, 140-unit Opus Development as architects presented the various drafts of their plans to the neighborhood groups over the past year.

Doran said his development was in its early stages and he agreed to continue discussing issues with city planners and neighborhood groups.

Council Member Gary Schiff, however, used Doran’s presentation as evidence that his plan is so far along that a moratorium would unfairly single out one developer. Hofstede said, however, that no development proposals have been filed at this time.

Hofstede had proposed the moratorium before the Council voted 9-4 on August 2 to approve the C3A rezoning for the Opus development.

Kristen Eide-Tollefson, owner of the Book House, founded a Save Dinkytown organization when her business was displaced when her landlord sold the building to Opus. She has moved her business to Dinkydale across the street from the proposed Doran project.

Eide-Tollefson was also at the August 30 meeting with her petition containing 3,200 signatures from people opposed to changing it from the low-density, low-height C1 zoned commercial district which, she said, gives Dinkytown its unique flavor.

Skott Johnson, who has been president of the Dinkytown Business Association for nearly 19 years, said the small-area planning was begun when the Marshall development that took out the UTEC building stimulated a need for planning.

“We decided then we needed to form a group to create a small area plan for Dinkytown at the same time as Marcy-Holmes is redoing its master plan,” Johnson said. “We hoped to have it done before the Opus project came.”

“We’re not opposed to development,” Johnson said, “but we want to have a plan we can buy into.”

Doran said he could talk with the current tenants of the buildings to help them fit into his new project. He pointed to his Sydney Hall development across the street from Dinkytown as a model about what could happen. Herbert’s and Gerbert’s sandwiches was in the old building and has reopened in the new one with rent below market rates, he said.

Cordelia Pierson, president of the Marcy-Holmes Neighborhood Association, expressed her disappointment in the council’s action but said her group will work with the developer to try for a project that will improve the neighborhood and

“The developer who has several projects in our neighborhood is not someone who is going to build something and run away,” Pierson said. “He is here for the long term.”

Among Doran’s current developments under construction or recently completed in the Marcy-Holmes Neighborhood are the Knoll, The Bridges, and Mill and Main—two buildings on Main Street near the riverfront.

City Planner Haila Maze and Hofstede have called a public meeting to discuss the small-area plan for Dinkytown at 6 p.m. Monday, September 9, at the Varsity Theater.

Read our complete coverage of development in Dinkytown.