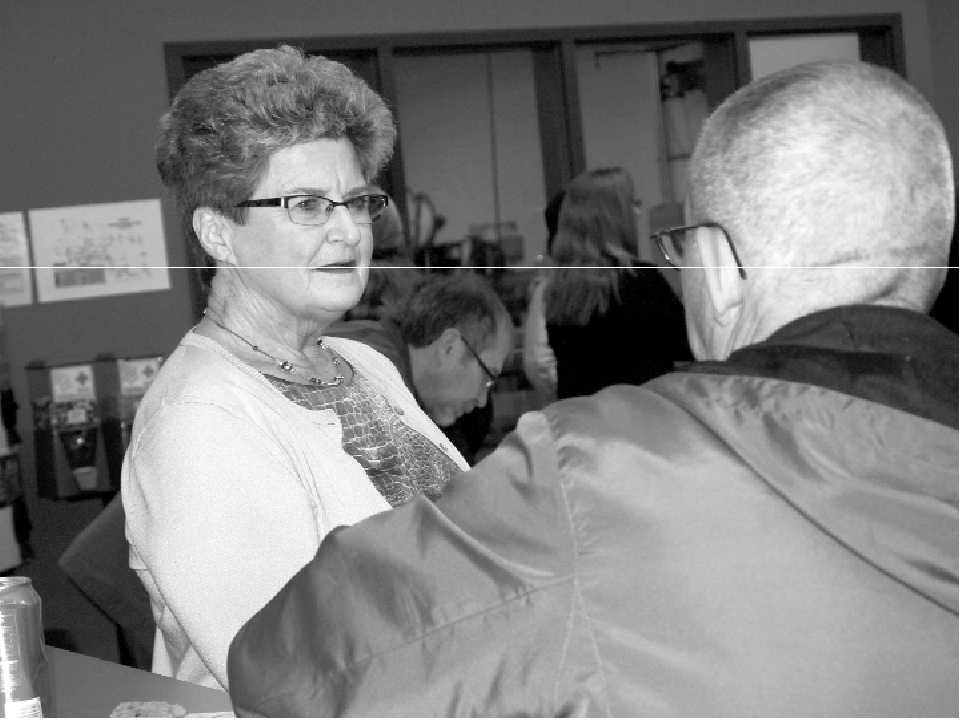 Barb Johnson talked with supporters one on one. (Photo by Margo Ashmore)

On April 11, one of the notoriously awful weather days, 16-year Fourth Ward Council Member Barb Johnson thanked about 40 people for coming out to Impact Mailing for her campaign launch party. Others came and went through the late afternoon as most of the talking was one-on-one.

In a short speech, Johnson said she’s pleased to ask for re-election and believes she’s been responsible and responsive, building on her long-term knowledge of the people of the Fourth Ward. Four campaign themes:

Responding to questions, Johnson talked about how exciting it was to have President Barack Obama in North Minneapolis for a gun violence summit. “He’s pushing the envelope of legislation,” she said. “We will probably see more money for mental health. Untreated mental health issues are always in the background” of these violent situations. Johnson, a registered nurse, worked “mostly in mental health.”

Johnson made a pitch for folks to attend precinct caucuses and become delegates for her. “The DFL endorsement will be incredibly important.”

Johnson was first elected to the Minneapolis City Council in1997, after chairing the Victory Neighborhood Association. She has served as President of the Minneapolis City Council since January of 2006 and is on the Public Safety & Health, Executive and Zoning & Planning committees of the City Council, the Board of Estimate and Taxation, MEET Minneapolis, the Riverfront Development Corporation and Hennepin County’s Task Force on Teen Pregnancy. She served for 18 years on the Metropolitan Parks & Open Space Commission.

Asked what it’s like being council president, Johnson wrote, “The role of Council President is very demanding but it opens doors for the person in that office. When the tornado hit North Minneapolis, the power of the office marshaled City Staff to come up with a plan to address the needs identified and garnered help from the governor and the other levels of government.”

Asked about the Salvation Army proposal to redevelop the Mereen Johnson site, Johnson said “I have listened to the concerns of my constituents about the hyper concentration of affordable housing and I think we need jobs most of all. The site is a large footprint with fairly heavy zoning that could be a job rich area. I think we need to think along those lines and support the burgeoning interest in historical preservation.”