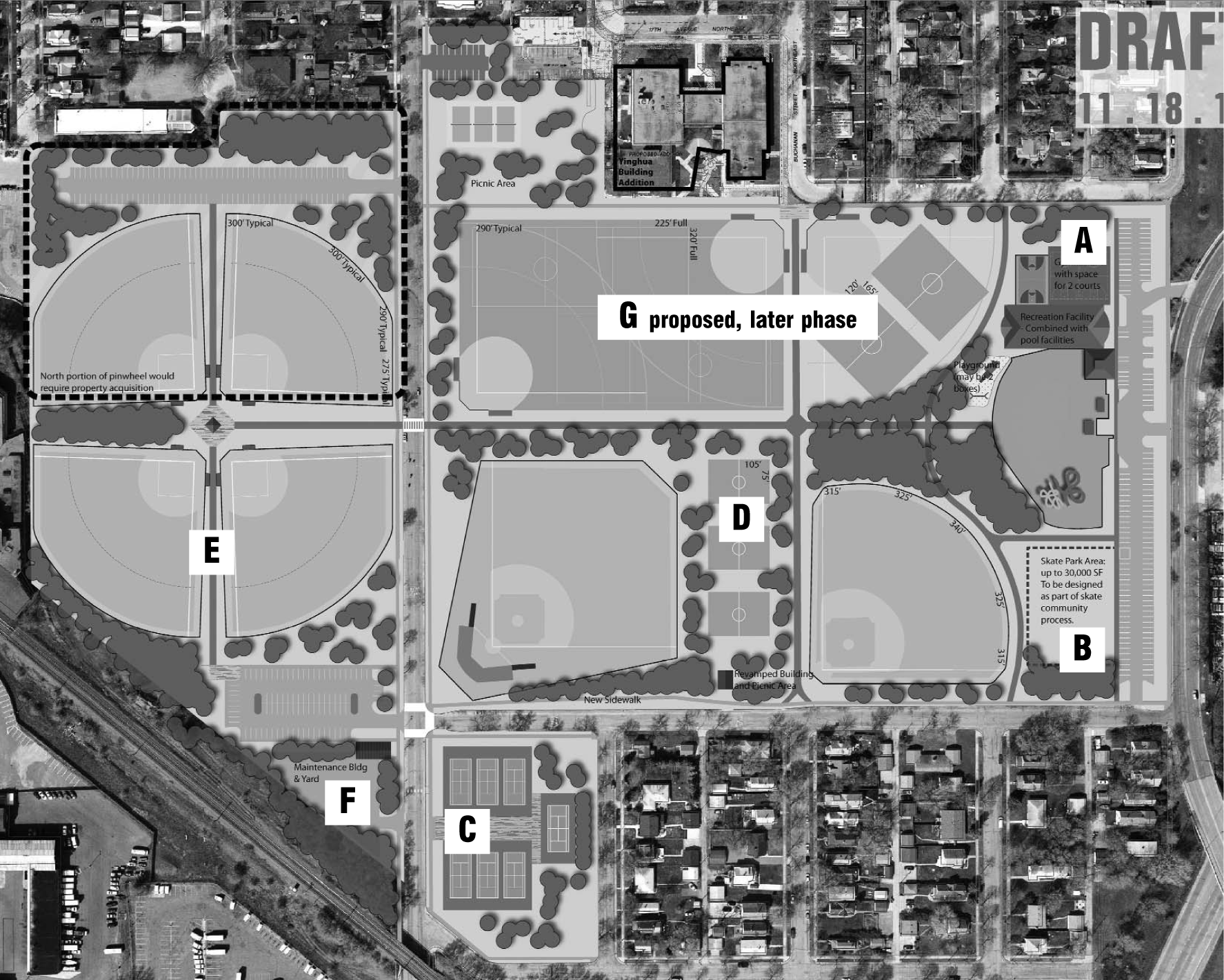 For an example of consensus at work, attend a meeting of the Citizens Advisory Committee (CAC) for a new master plan for Northeast Park. Actually, those meetings are done; about 600 individuals attended one or more, or filled out an online survey, according to Minneapolis Park and Recreation Board (MPRB) Commissioner Liz Wielinski.

Northeast park is a collection of parcels roughly between 14th and 16th Avenues NE, Johnson to Fillmore and west of Fillmore Street NE, one parcel south of 14th between Pierce and Fillmore. Community recommendations for a new master plan for the park will be presented to the MPRB planning committee at 6:30 p.m., Wednesday, Dec. 18, according to a MPRB news release. The presentation includes a public hearing, and the public is encouraged to attend and comment. The meeting is at the Park Board’s Headquarters, 2117 West River Road.

“This is an exciting opportunity for the Northeast Community,” Wielinski said “I look forward to the public hearing and the opportunity to start improvements in Northeast Park.” Once a master plan for the park is approved in 2013, a recreation facility plan will be developed in 2014, with groundbreaking and construction slated for 2015.

Throughout 2013 the CAC, appointed by various public officials and interest groups, with MPRB staff, engaged the community and park visitors to develop a new master plan for the park. On Nov. 18, 2013, the CAC finalized its recommendations, including something of a phasing plan, since not all of the money required would be available right away.

Some features, such as playgrounds and tennis courts, have more fund-raising potential than others, advised Jennifer Ringold, MPRB director of strategic planning. Major League Baseball, for example, has been known to drop $350,000 to build a field, “once a master plan is in place,” she said.

“That building’s design will be determined in a future phase of community engagement and will be coordinated with the system-wide recreation facility plan. The MPRB’s Five-year Capital Improvement Program currently includes $4 million for building and site improvements and $1.15 million in field and site improvements.”

Here are some highlights that emerged at the CAC’s sixth meeting Nov. 18 (keyed with letters in the graphic at right):

CAC members echoed that projects most important to the community should be done in the first phase, including east-west and north-south pedestrian connections, and neighborhood buffers at the edges.

They agreed the new recreation facility should be in the northeast corner of the park (A), with a potential skate park to the south of the existing water park. Both facilities would need further planning with the public, especially the skateboarding organizations for the skate park (B), engaged.

Tennis courts, (C) seven of them, would be set up three and three with bleachers in between, plus one on an end, all at the far southern end of the park (courts are now near the school at the northern end). The plan states “ensure tennis is always present at Northeast Park, don’t remove existing tennis until new courts are built.”

Working west from the Johnson Street edge at the middle latitudes of the existing park, there are two ballfields. Those would stay, and between them would be three field areas stacked, (D) for flexible use.

On the farthest west edge, west of Fillmore, there are now three fields that have overlapping outfields. The CAC’s long range hope for this area is that land to the north of this area could be acquired from nearby industry and become two more fields in a pinwheel with all the home plates at the center. Toward that end, their recommendation is to build the southern two fields, (E) reconfigure parking and add a maintenance building requested by the park staff (F).

[The properties are 1515-1/2 Central Ave. and 1600 Fillmore St. NE, both owned by 1515 SIB, LLC, attention Scott Tankenoff, 2424 Kennedy St. NE, according to Hennepin County property records. The Fillmore property is Dunbar Armored’s building and parking lot, the Central address is striped for parking, mostly open with two smaller buildings. The owner recently applied to rezone the area to put it in an industrial living overlay district.]

Fields (G) closer to the existing Yinghua school building would be addressed in a later phase, partly because the playground there now has some useful life left, and the CAC members said they did not want the community to go without a playground while waiting for funds to complete the park.

The HKGI (consultants) graphic above is also available online at minneapolisparks .org/currentprojects. Click on Northeast Park Master Plan and find Draft Master Plan Concept in the Nov. 18 materials; it will be further updated for the Dec. 18 session.

During the Nov. 18 CAC discussion, cost figures flew fast and furious, at one time Bryan Harjes of HKGI, saying “I’m thinking about how to structure the bid package, we may be able to do this with another layer of prioritization.” CAC members questioned the budgeted cost for the maintenance facility.

There were other loose ends to reach consensus on, and as the meeting was starting to run over time. Chair Doron Clark asked for votes on, for example, what to do with a space next to the Yinghua building. “Should we recommend it be a playground, or should we be open to it being collaborative space with the school” or whatever future use (if Yinghua were to move). Division was seven in favor of collaborative space, four in favor of playground. Further discussion ensued on what the minority voters would need to see in order to support the more popular option.