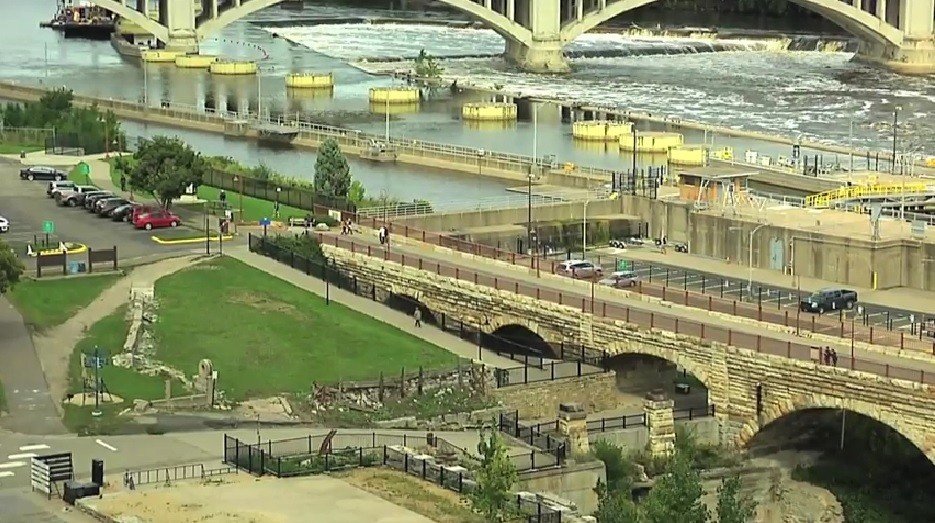 Imagine St. Anthony Falls as it looked when Europeans first saw the Mississippi River cascading over limestone rocks four centuries ago in the only natural waterfall on the river.

A scene like that could become reality if the Minneapolis Park and Recreation Board accepts a proposed update to the board’s master plan for the Central Riverfront Regional Park. The plan is open for public comment for until Jan. 18. MPRB will host a public hearing on the plan on Feb. 4.

“We have a really magnificent park, but it needs additional investments, like improving connections to the river, completing trails along the river, providing places to warm up, adding bathrooms, and further enhancing the visitors’ experience,” said Ted Tucker, chairman of the 19-member Citizens Advisory Committee as he presented the 142-page document to the board on Dec. 17.

The plan would restore the east side of the falls where some of the original limestone still exists under a small abandoned power substation and also extend the park boundaries to connect the bicycle/pedestrian trail from the Stone Arch Bridge to Bridge No. 9 at the University of Minnesota.

The CAC’s first recommendation was to change the name of the Central Riverfront district to St. Anthony Regional Falls Regional Park to recognize the falls as the “salient feature” of the park, Tucker and project manager Tyler Pederson told the board.

Other goals include improving public access to the privatized southern end of Nicollet Island, repurposing the observation tower on the upper lock as a park information center, recreating the channel around Boom Island for storm-water treatment, opening a path to the park through current Star Tribune land near Plymouth Avenue, completing a bike trail to link the Stone Arch Bridge to the Dinkytown Greenway, linking Mill Ruins Park to the Mill City Museum through a tailrace tunnel, and recreating the walkway path below the lower lock along west side of the river.

“The real importance of this plan is to support future requests for infrastructure improvements,” Tucker told the Daily Planet. As a regional park, the St. Anthony Falls Park receives funding from the Metropolitan Council, which required that changes be part of a plan, he said. This plan updates the 1982 master plan for the Central Riverfront.

CAC member Peter Zenner recorded a 12-minute video that Tucker played for the board in place of a verbal presentation. In it, committee members showed places and activities that emphasized their interests in the river, ranging from canoeing, watching wildlife, operating businesses, experiencing quiet places, and riding and expanding bike trails.

Wayfinding is important, Tucker said. For example, he said, instead of cul-de-sacs at the ends of the Stone Arch Bridge, visitors should immediately visualize how the landscape looked when the bridge provided a major railroad link across the river. “The signs are the least important part of wayfinding,” he said.

“On both sides of the river, you should be able to see where the railroad used to go, why the Stone Arch Bridge was configured the way it goes,” Tucker said. Many visitors don’t’ see that railroad went from the bridge to the coal haul road toward the University and Dinkytown, he said.

With the closing of the lock to prevent migration of Asian carp, the Army Corps of Engineers building and observation deck could become a visitors’ center for the downtown side of the river. Of course, Tucker acknowledged that such changes require cooperation among a variety of agencies and companies.

Pederson said the CAC, as they called the advisory committee, met 13 times, sponsored five charrettes to consider specific places, set up displays at the Mill City farmers’ market and sought public involvement in other ways. Everyone attended 90 percent of the meetings, he said. “Very easily over a thousand hours were put into this plan.”

Tucker sought consensus among the “knowledgeable, passionate, engaged people. Some discussions got a little feisty. Only one member dropped and all the rest showed up at the last meeting where we had 47 substantive amendments and 41 editorial ones in an hour and half, and we unanimously adopted the draft you have today,” he told the board.

MPRB has scheduled a public hearing on the plan on Feb. 4 and a vote on Feb. 18. After that, the plan will go to the Metropolitan Council for final approval.