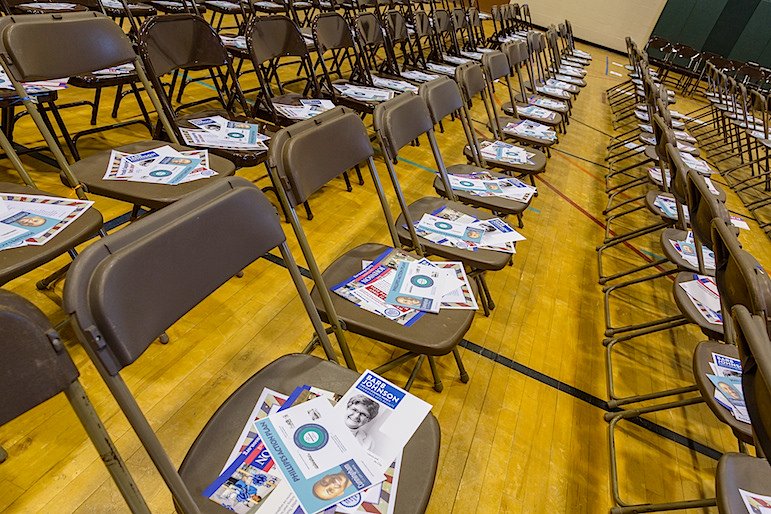 Campaign materials await Ward 4 delegates at the April 22 DFL ward convention. After four rounds of balloting, the delegates did not endorse a candidate. Photo courtesy of Tony Webster via flickr.

On Nov. 15, 2016, one year after the death of Jamar Clark, Nekima Levy-Pounds stood before the Minneapolis Police Department’s Fourth Precinct and announced her candidacy for mayor.

She spoke with resolve on holding police officers accountable, on the city’s persistent racial disparities and above all the need for change toward more just and equitable policies.

But when asked whether she would seek the DFL endorsement, Levy-Pounds stated at the time that she was unsure. A month later, on the counsel of her campaign staff, she began to prepare for the endorsement process. Levy-Pounds has long been a Democrat, and since she moved to Minnesota in 2003, she has voted DFL. Over the years, she has participated in many DFL events, including party conventions. Seeking the endorsement seemed like a logical choice.

“But it really didn’t sit right in my spirit,” Levy-Pounds said as she reflected on that decision during a recent interview at her West Broadway Avenue office. Having known women of color who have run for office in the Twin Cities and experienced discrimination, Levy-Pounds said she had serious concerns with how the endorsement process was inherently inequitable, especially to people of color and immigrants. She also considered Mark Dayton’s campaign when he first ran for governor in 2010. When he didn’t seek the DFL endorsement, he said he wanted the voters to decide who the best candidate for governor was, not the delegates. Levy-Pounds was an alternate at the statewide DFL convention that year, and she said witnessing Dayton’s actions planted a seed of inspiration.

After further reflection with her campaign staff as well as friend and Ward 5 City Council candidate Raeisha Williams, Levy-Pounds came to a decision.

On April 4, caucus day for the DFL across Minneapolis, Levy-Pounds and Williams announced that they would not seek the endorsement of the city’s biggest party.

“The DFL endorsement process reinforces the notion of political exclusivity and severely limits the possibility of viable candidates of color from competing for office during November elections,” Levy-Pounds said in an April 4 statement. “I have made a conscious decision to no longer participate in an endorsement process that limits access to electoral power and often results in inequitable outcomes.”

Levy-Pounds and Williams are part of a growing movement in Minneapolis politics as more candidates eschew the party’s endorsement process – or the party altogether – often in search of more equitable, grassroots options as they run for office.

So far, 11 candidates between the mayoral, City Council and Parks and Recreation Board races are not seeking DFL endorsement. Williams and Levy-Pounds are the only two still running as DFL, while the other nine candidates are running under the Green, Socialist Alternative and Republican parties.

In a city where the DFL’s influence is ubiquitous and longstanding – from the Minneapolis Board of Estimate and Taxation all the way up to the city’s federal representation – the rise of these campaigns could challenge the narrative that the City of Lakes is a “one-party town.”

Isuru Herath is a labor organizer and Minneapolis resident who lives in Ward 9. When he saw the heated challenges on delegate eligibility between Council Member Alondra Cano, and opponents Mohamed Farah and Gary Schiff – Herath was frustrated. The endorsement process had stirred up a fight without engaging voters or discussing real issues affecting the ward.

“You have a situation where the system is set up so that you have in-fighting between marginalized people,” he said. “It’s a tactic of white supremacy to divide and conquer.”

Herath is no stranger to DFL politics. During the 2014 election cycle, he was an organizer for the DFL, working mostly in the St. Cloud area. He was hired as a regional director for the party in 2016, but he quit after only a week and has not returned to politics since. Herath said one of the main reasons he quit was a lack of authentic engagement from the party to communities of color.

“Voter engagement for them was never about sitting down and talking about race, or patriarchy or capitalism and realizing collective power. You’d go up to someone’s door, tell them that this person will save us and to go vote,” Herath said. “The language in the office would always be ‘We need Somalis, we need Hmong, we need Hispanics to win this campaign, but only ever in terms of votes, not in changing the system.”

At the Minneapolis DFL precinct caucuses on April 4, the party’s system was put to the test. Some wards – like Ward 6 and Ward 9 – saw an increase in participation, but also saw a lack of translation services and proper amplification. With the caucus’ many complex rules and late weeknight hours, the process became inaccessible even to folks who made the effort to attend.

“Through this process of caucusing, I know that they [the DFL] don’t make sure that there are enough African Americans or Latinos or people of color involved in the process. They just depend on people who have been involved with the process, who know the information very well to be a part of it,” said Williams in an April 4 video statement. “So that makes it really unattainable to those who aren’t a part of it, who aren’t informed.”

Dan McConnell, chair of the Minneapolis DFL, noted that the party “has seen a steady increase in participation in local politics of people who had been underrepresented,” pointing to the numerous candidates of color who have been elected in recent years, including state Rep. Ilhan Omar and Rep. Fue Lee, as well as City Council members Cano, Abdi Warsame and Blong Yang. However, McConnell acknowledged that there is still work to be done to engage more people, especially younger voters.

“We need to find a way to connect with them about how relevant politics is in their lives not just now, but for years to come,” he said. “The DFL is always open to ways to be more inclusive and welcome more voices into the party. Times are changing and we are certainly willing to change with them to remain the party that is committed to creating opportunities for all Minnesotans.”

Reduction in choice, increase in disenfranchisement

The DFL is certainly a dominant force in Minneapolis. Currently on the City Council, 12 of the 13 council members are DFLers, with Council Member Cam Gordon the lone Green Party representative. Of those 12 DFL council members, 10 won the party’s endorsement when they were last elected in 2013. In the 2016 Minneapolis Public Schools Board of Education elections, only DFL-endorsed candidates won. Endorsed candidates get the benefit of the full DFL machine, including support on events, phone banking, door knocking, direct mail and more.

But if a candidate does win the endorsement, the other DFL candidates in that race are expected to step down and get behind their former rival – reducing the number of choices that appear on the November ballot.

The endorsement, Levy-Pounds said, keeps power in the hands of a few and sends a signal to voters that a decision has already been made without them even before Election Day. In the “one-party town” mentality an endorsement can turn the election into a seemingly foregone conclusion, causing voters to stay home – a worrisome outcome for communities that have historically experienced state-sanctioned disenfranchisement.

While Minneapolis may be dominated by the DFL, the party is by no means homogenous.

“We have conservative Democrats, left of center, liberals and progressives on our City Council,” said Ginger Jentzen, the Socialist Alternative candidate running in Ward 3 and the former executive director of 15 Now Minnesota. “Even when we have seen a DFL-dominated City Hall, our movements have relied on more independent-minded support to move forward. Now they need political expression.”

Being independent of the DFL party – and its 70-year long history – means being more responsive to current movements, like Black Lives Matter, Jentzen said.

“There is an establishment wing tied to big business. I didn’t want to be beholden to those party politics,” Jentzen said.

Pree-Stinson has a similar approach, noting that when her platform demands an even more aggressive and progressive minimum wage policy, or if she wants to address systemic issues of homelessness, she doesn’t have to worry about deviating from the party line. For Pree-Stinson, ditching the DFL and its endorsement process meant “running with my integrity fully intact,” she said.

“I’m not part of a system that’s inequitable. It’s hard to be part of a process and speak against it at the same time,” she said.

Jentzen and Pree-Stinson’s parties may be smaller than the DFL, but they are still forces to be reckoned with. Council Member Gordon is seeking his fourth-term on the City Council, while in 2013 Kshama Sawant of the Seattle City Council became the first Socialist Alternative candidate to win a seat in a major U.S. city.

Levy-Pounds pointed to Fannie Lou Hamer leading the Mississippi Freedom Democratic Party in 1964 or Sen. Bernie Sanders running as a Democratic Socialist in 2016 as models how by challenging the Democrats from the left, there can be a greater push for change. Already, recent DFL conventions in wards 1, 4, 7, 10 and 11 all ended with no endorsements after multiple rounds of balloting, leaving powerful incumbents like City Council President Barb Johnson and City Council Majority Leader John Quincy without the safety net of their party.

“Iron sharpens iron, then you have a tendency for healthy competition. If you’re stagnant, then you’re perishing,” Levy-Pounds said.

For Herath, seeing these candidates challenge the status quo is encouraging.

“People say that this is not how you’re supposed to play the game. But when we [people of color] have played the game, we’ve been screwed over,” he said. “If you actually have a people’s movement, and you’re willing to sacrifice power and put people first, I might be interested.”