Minneapolis Mayor R.T. Rybak is spearheading a project he calls the Green Homes North Initiative, in which he plans on having 100 energy-efficient houses built from the ground up throughout the North Side of Minneapolis. The homes will be built using materials that make them more efficient at controlling interior temperatures and fitted with energy-efficient appliances. They will utilize other products and materials to help reduce waste, conserve energy, and improve air quality.

Welcome, MSR readers, to a new section you will see appear regularly in these pages, something we call Green2Green. Most of you by now have heard of the green movement to clean up our planet, stop the waste of precious natural resources, and get climate change under control. What is not always clear is just what this movement means to each one of us in our everyday lives. Nor is it always clear how this movement includes environmental justice issues of particular concern to communities of color. And finally, it is not always clear how the green movement can also save us green, as in Benjamin green, and is creating new opportunities for productive careers. We hope to clarify much of this for our readers in the stories that will appear in Green2Green in the months ahead. So slip on your green-tinted glasses and learn what this movement means to you and your family today as we make the world safe and healthy for the generations of tomorrow. -Jamal Denman, Online Editor, Minnesota Spokesman-Recorder 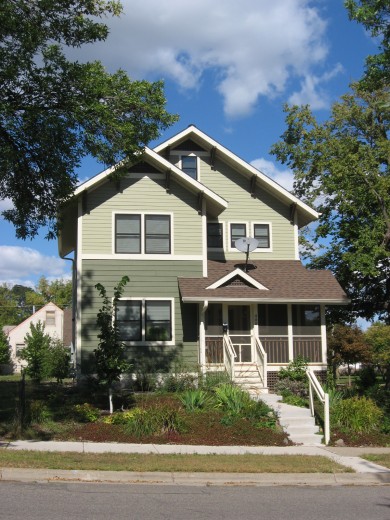 The project is being promoted as part of the mayor’s multifaceted approach toward “improving housing in North Minneapolis.” According to Rybak, the City has been “putting significant funds into building affordable housing” in North Minneapolis for approximately the past 10 years. When the foreclosure crisis first hit, Rybak says that City, State, and federal monies were combined to acquire foreclosed homes, some of which were renovated and others demolished.

“We had to do a lot of tough work, and we continue that work,” says Rybak, adding that these efforts have helped create a situation where prospective homebuyers can find quality affordable housing on the North Side of Minneapolis. “Buying a house in North Minneapolis right now is the greatest housing bargain in the metropolitan area by far.”

The Minneapolis mayor says the City has helped move the home-buying process along by “doing some targeted programs” that give new residents incentives to purchase a home in North Minneapolis. Although the City was already making efforts to acquire homes to renovate for new buyers and clearing properties, Rybak felt that a program like Green Homes North was needed to “attract more private individuals to buy more homes in North Minneapolis.”

The goal of Green Homes North is to build 100 new houses in areas on the North Side of Minneapolis over the next five years. Rybak not only wants to provide opportunities for single families to buy houses; he also hopes to increase the values of homes in the surrounding areas where the “green” homes are built.

“[They] will be sited primarily where we think they can not only bring in one family owning it, but help increase the housing values for other homeowners on the block,” explains Rybak. The City of Minneapolis also anticipates that their investment in the construction of green homes “will spur private-sector development of green homes in Minneapolis.”

Rybak says the idea for Green Homes North was born out of an “experiment that was successful,” called the “Hawthorne EcoVillage.” The Hawthorne EcoVillage was a project that began seven years ago when the City went into an area of the Hawthorne neighborhood Rybak describes as having “the highest crime and worst foreclosure [rates] in the city.”

After “lowering crime and cleaning up some properties,” according to the mayor, the project built two green, energy-efficient homes that sold immediately. The immediate sale of the homes convinced the mayor the “green homes” strategy would work.

In 2012, public and private financing was secured to start the Green Homes North project. The City of Minneapolis used $300,000 in local funds to secure another $700,000 from the Minnesota Housing Finance Agency (MHFA) and the Family Housing Fund. This helped fund the first phase of the project now in progress.

Six community developers (four nonprofit and two private) have submitted 18 proposals to the City’s Department of Community Planning and Economic Development (CPED), which will review and select the proposals for contract awards. The nonprofit developers who submitted proposals were Artspace, the Greater Metropolitan Housing Corporation (GMHC), Project for Pride in Living (PPL), and Powderhorn Residents Group (PRG). Private developers who submitted proposals were Mitchell Construction and Peyser LLC/Isenberg+Associates.

“We’re going to provide newly constructed green homes in City-owned vacant lots in North Minneapolis… Four of the 18 proposals we have are for development on lots that came to the City as a result of the tornado [that caused extensive damage on the North Side in 2011],” Rybak says.

Providing employment opportunities for North Side residents is another key component to the Green Homes North project. According to Mayor Rybak, “Job creation is a big part of this work.” He says City staff are doing all they can to solicit proposals from Northside developers for the training and hiring of workers. A course is being taught at Minneapolis Community and Technical College (MCTC) “for apprentices who are then matched with developers to learn green construction techniques.”

There are also plans to hire North Minneapolis residents with low incomes through a program facilitated by Renewable Energy Network Empowering Workers (RENEW). RENEW is expected to place 30 participants into jobs in green building maintenance and construction. The City plans to meet or exceed the goal of filling the jobs created by Green Homes North with at least 32 percent minorities and six percent women.

Although average construction costs of the green homes are estimated at around $220,000 each, average sale prices are projected to be approximately $175,000. Outreach to prospective buyers will be done by nonprofit developers working with Green Homes North. The nonprofit developers will also provide homeownership counseling to low-income households looking to purchase a home.

Rybak believes the construction of new green homes can also have a positive effect on the process of obtaining financing. He feels that it “can have an impact on lenders who too often have been reluctant to give people the home loans they need in North Minneapolis because the lender was afraid the house couldn’t hold its value… This we think will be helped by investing in new housing [in North Minneapolis].”

The home in the photograph, located in the Hawthorne EcoVillage, is the first home built in the development. It was designed by Architron Architects, built to Leadership in Energy and Environmental Design (LEED) standards and achieving LEED platinum certification.

A “green” home is not distinguished by appearance but rather by how it operates over time to save a homeowner living expenses directly related to the home. A green home can also be constructed using sustainable materials and by tracking the carbon footprint of where the materials actually come from along with other best practices in home construction, such as what types of plantings surround the home and their functions.

For more information on the Green Homes North Initiative, contact the Mayor R.T. Rybak’s office at 612-673-3825.

(Photo courtesy of Project for Pride in Living)