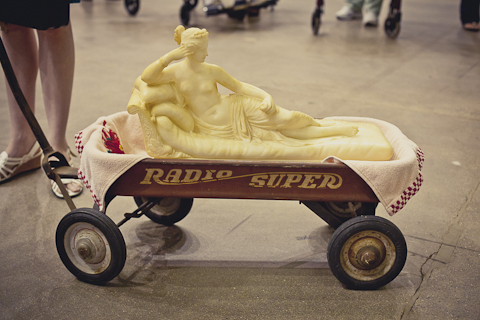 Pauline Bonaparte Borghese looked regal, lounging bare-chested in a red Radio Super Wagon. A soft blanket gently encircled her and she rested her head on her slim hand. In another time, Pauline was Napoleon Bonaparte’s little sister and a French princess. A St. Paul physician, captivated by her marble good-looks, had her shipped from Florence to his home decades ago.

Now here she was, at the Minneapolis Convention Center, with new owner Kimberly, who purchased the Antonio Frilli sculpture at the good doctor’s estate sale.

Kimberly had high hopes Pauline would fetch a fortune at Antiques Roadshow. Kimberly [Roadshow requests last names not be used “for security reasons”] explained the sculpture sits at home on top of an antique desk.

Kimberly joined other fortune hopefuls when Roadshow stopped at the Convention Center July 9, one of six cities in their 2011 Summer Tour. 70 volunteer appraisers from across the country covered more than 22 specialties at the event. 36,000 viewers applied for the coveted tickets, with the show allocating about five to six thousand. Each attendee could bring two objects.

Roadshow gives ticket holders a reserved time, and even with that plan the lines were long. Once at your reserved time, another line forms to greet the appraiser. At first glance, if an appraiser feels your heirloom or yard sale bargain is valuable, they don’t say a word but instead motion to one of the show’s producers.

“The appraiser calls you out and pitches our producer,” said Judy Matthews, Roadshow PR rep. “The producer talks to the guest to see if there is a good background story. Then, if approved, they go to the Green Room where we apply make-up.” Next, the guest, their object, and an appraiser are filmed on one of several program sets scattered throughout the crowd; then, its value is revealed. The guest’s surprise, or disappointment, is genuine.

Diane, of St. Paul, was one of the lucky ones called out by a Roadshow producer. She brought an ornate ring and clearly enjoyed the spotlight. According to Matthews, out of the ten to twelve thousand objects taped during the summer, about 55 are in final broadcasts.

Firearms are popular in the Midwest region, explained Matthews. “A lot of people have old firearms passed through their families. These are communities with strong ties to hunting. Colt pistols have a lot of value to them.” There was a special security checkpoint for all firearms entering and no ammunition was permitted. Roadshow does not appraise explosives, their event guide said.

The paintings and drawings were so popular that seven appraisers were assigned to this category alone. All shapes, sizes, and conditions were hauled in to the Convention Center. “We get a ton of paintings. Everyone has a painting at home. If you have the right painting, it can be worth a lot of money. At Antiques Roadshow, many of our most valuable finds are paintings,” said Matthews.

Barbara, from Chicago, drove to Minneapolis with a wood clock from Germany valued at  $400 (“we thought it would be worth more”) and an urn valued at $400. “We always watch the show and we love it,” she said. Barbara decided she was not going to sell either item. Appraisers for Roadshow are not allowed to solicit business at the event, but provide individual business cards to pick up as people exit.

One of the more unusual aspects of Roadshow’s media relations is their encouragement to bring in an item “so reporters can get an interesting perspective on how Antiques Roadshow works (you might be pleasantly surpised).”

Intrigued, I decided to learn first-hand what it is that attracts 10 million viewers to the show each week. I am not an antique-hound, so I chose a rhinestone necklace and bracelet of my mother’s from the 1950s. Maybe the rhinestones were real diamonds! Maybe they were from a renowned jewelry designer! I met with jewelry appraiser Rosalie “Rhinestone Rosie” Sayyah of Seattle. She explained my mother’s rhinestone, bow-shaped necklace was a popular prom accessory and said it had more “sentimental value” than monetary value. The bracelet was more “bold” with pear-shaped crystals, but valued under $100. I was not “called out” by Rhinestone Rosie and filmed for an upcoming show.

Roadshow included 120 volunteers from Twin Cities Public Television, one of the local sponsors of the event. Everywhere you looked, people in blue polo shirts with a tpt logo assisted with lines, questions, and showed sincere interest in the objects people brought in.

The programs taped during the summer will air during Roadshow’s 16th season. The exact airdates or line-up of cities won’t be known until fall of 2011. Roadshow’s e-newsletter, “Fanfare,” at pbs.org/antiques will have updates.

Antiques Roadshow’s Facebook page reported a rare sculpture by Frederic Remington discovered at the Convention Center worth $250,000. Their Facebook fan page has over 200,000 “likes.” Roadshow’s YouTube channel has more than 102 million views. 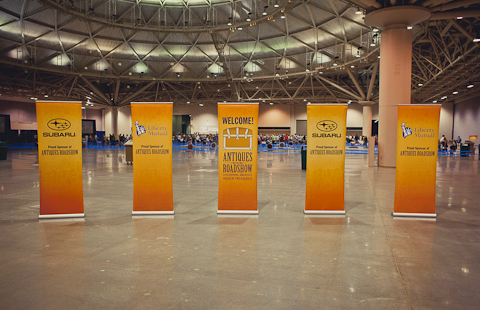 (Above) Antiques Roadshow visits the Minneapolis Convention Center July 9. Now in its 16th season, the show has 10 million viewers a week. (Photos by Jeff Rutherford). 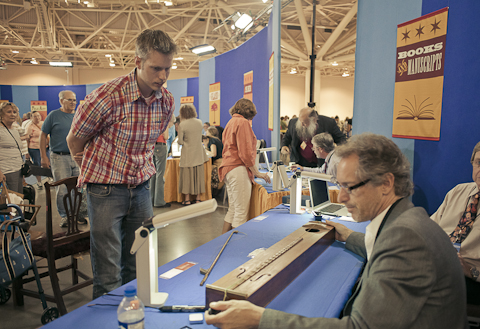 (Above) Musical Instruments appraiser David Bonsey, right, of Massachusetts looks over an instrument at the Convention Center. 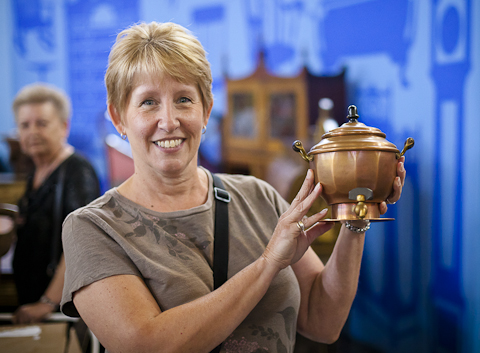 (Above) Barbara drove from Chicago to attend the Minneapolis Roadshow event and her urn was valued at $400.”The appraiser told me to polish it,” she said. 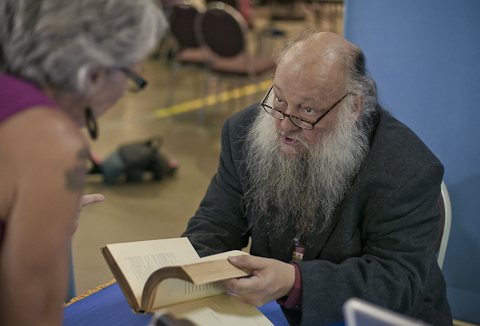 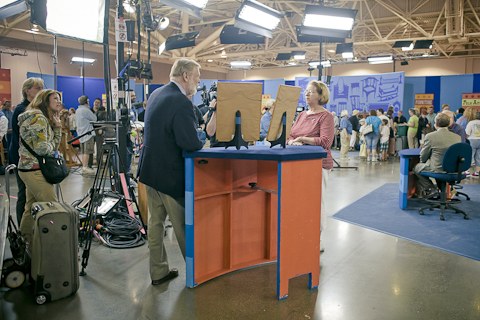 (Above) Roadshow produced on-set segments among the crowds of people attending the Minneapolis event. 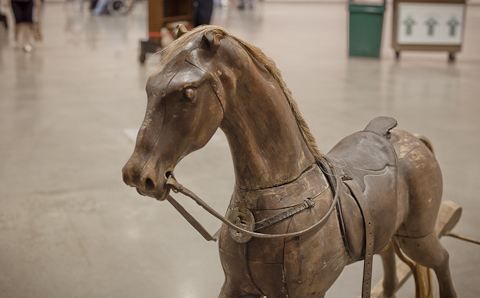 (Above) A wooden rocking horse brought to the Minneapolis Roadshow. 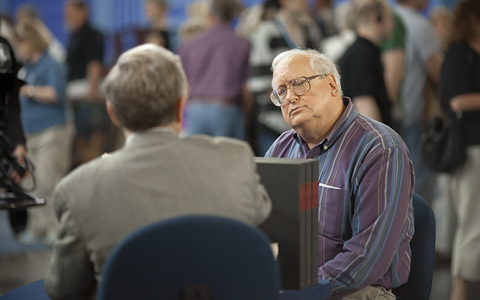 (Above) A visitor listens intently to one of the 70 Antiques Roadshow appraisers volunteering at the Minneapolis event. 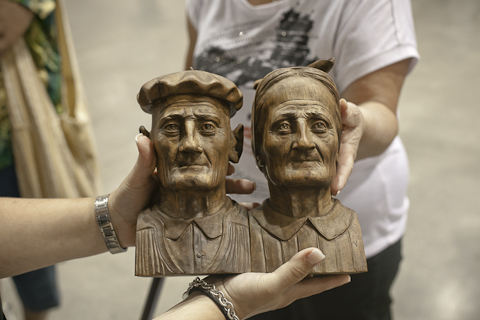 (Above) An example of the 12,000 diverse items brought to the Roadshow event at the Minneapolis Convention Center. 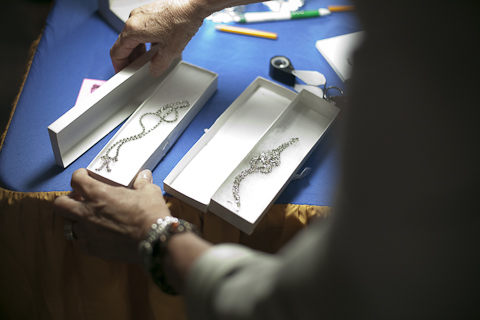 (Above) Reporters were encouraged to bring in an item to experience the full Roadshow experience. Here Rosalie “Rhinestone Rosie” Sayyah looks over a prom jewelry set from the 1950’s valued at “sentimental.”

(Above) Kimberly brought a sculpture of Pauline Bonaparte Borghese to Antiques Roadshow. 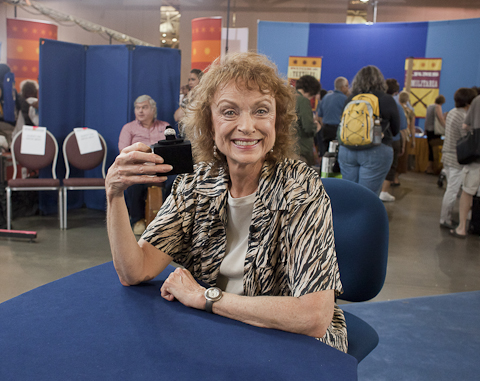 (Above) St. Paul resident Diane shows-off her ring at Antiques Roadshow. She was pulled aside by the producers and filmed for a possible appearance on the show.