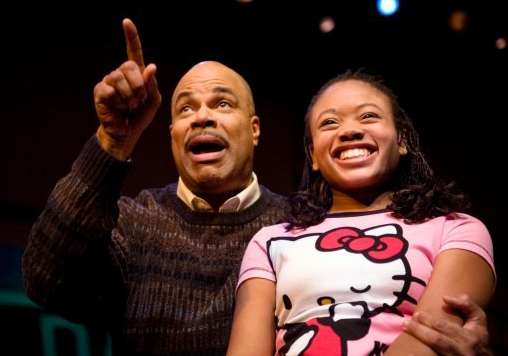 December is a peculiar month for theater. While I can’t find data to support this hunch, it seems plausible that more theater tickets are sold in December than any other month, as families who otherwise never see plays make reservations to see holiday chestnuts. Many of the Twin Cities’ best theater companies, though, go into holiday hibernation, unwilling or unable to compete with the big downtown juggernauts.

In previous years we’ve published a comprehensive guide to holiday theater, but it was becoming harder and harder to find new things to say about what are basically the same shows year in and year out. Instead, this year I’m posting this relatively brief, completely subjective guide to notable shows on local stages next month. Please share your own recommendations in the comment section below.

The behemoth that must be acknowledged before all others is the Guthrie Theater’s Christmas Carol, a reliably traditional interpretation that for many families is the beginning and end of all Twin Cities theater. Big Blue has given its production a reboot over the past few years, first experimenting with a one-act condensation of Barbara Field’s script and then commissioning an entirely new adaptation by Crispin Whittell. I saw that production in 2010 and was disappointed with Daniel Gerroll’s snarky Scrooge. Last year Gerroll was replaced with JC Cutler in a production I missed (read Christopher Kehoe’s Daily Planet review); this year Cutler returns, and I’ll be there on opening night to see how his scowl stacks up.

The Children’s Theatre Company (CTC) knows how to butter its fruitcake during the holidays; I very much enjoyed their tender 2010 adaptation of A Christmas Story, and last year John Olive—in a review republished from our media partner HowWasTheShow.com—begrudgingly admitted that their Wizard of Oz “works, and works well.” This year, CTC is staging an adaptation of Dr. Seuss’ How the Grinch Stole Christmas, and our reviewer Maddy Salmon was unimpressed. As an alternative, consider the Youth Performance Company’s Narnia, a take on the C.S. Lewis novel that CTC badly botched in 2008.

Penumbra Theatre’s Black Nativity has been a beloved holiday tradition for years, but this year the pioneering company is facing a financial crisis. Instead of Black Nativity, Penumbra is staging a series of performances under the theme “Home for the Holidays.” The shows will surely be enjoyable, and it’s hard to believe Santa won’t look favorably on you lending your support to this essential institution. Meanwhile, another community tradition, In the Heart of the Beast’s La Natividad, is returning to the Powerhorn neighborhood.

Some families really need that oom-pah-pah downtown glamour, though, and for a classic fancy night out, there’s no beating the Ordway: between the skaters on the Wells Fargo rink and the holiday lights in Rice Park, you almost get your money’s worth before you even set foot in the glass-walled lobby. This year the Ordway is hosting the touring production of Elf, the Broadway musical based on the 2003 Will Ferrell movie. The New York Times called the 2010 musical “generic…but polished,” which is precisely what many ticket-buyers want for Christmas. Another Broadway musical coming through the Twin Cities in December is Catch Me If You Can, the 2011 adaptation of Steven Spielberg’s 2002 movie. Watch for Daily Planet reviews of both shows.

The Jungle Theater can pride itself on giving safe harbor to serious theater during the holiday season as well as the summer months; their 2009 production of Conor McPherson’s The Seafarer remains the single best piece of holiday theater I’ve ever seen. This year they’re staging Sarah Ruhl’s In the Next Room, which Matthew Everett—who sees a lot of theater—says is one of the best shows he’s seen all year. Theatergoers who want to be even more challenged in December can visit the Playwrights’ Center for a reading of Qui Nguyen’s new script War is F**king Awesome.

Looking for something off the beaten path? Consider the infallibly entertaining British Arrows Awards at the Walker Art Center—now in the Walker’s newly refurbished movie theater—or my personal favorite little-known holiday gem, the entertaining and educational An “Eventually” Christmas in the Flour Tower elevator ride at the Mill City Museum.