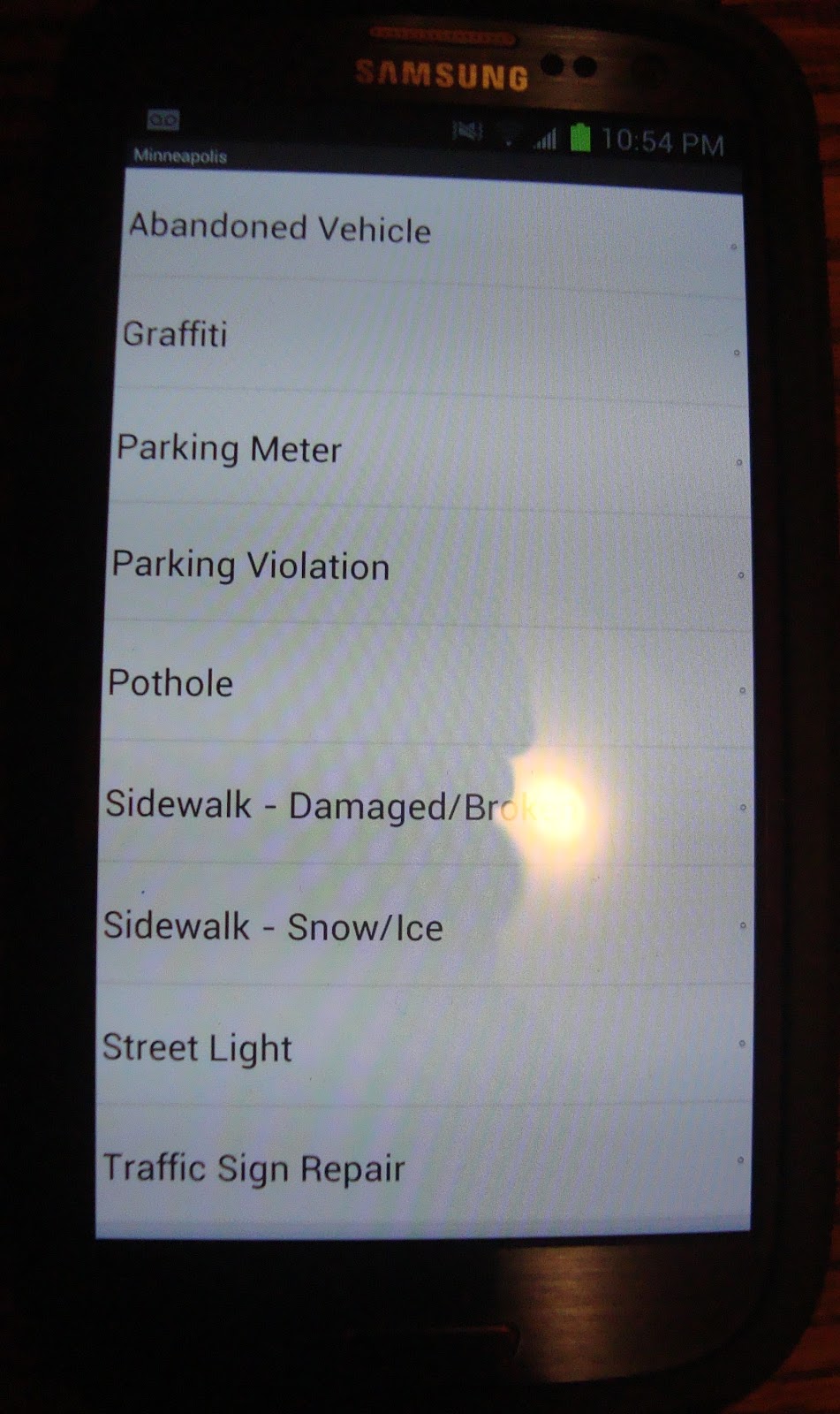 I’ve heard quite a few positive reviews of the Minneapolis 311 smartphone application. My experience, however, has been far from that. First there were problems completing the reports, although those were supposedly limited to the Android operating systems. Then those were fixed but my phone still acted up. I tried erasing and reinstalling the program, to no avail. Then I picked up a new phone, and hoped that would do the trick.

At a recent 3rd Ward CARE meeting, the app was again rolled out to the community. During that presentation, we were informed that the “other” category would be removed from the smartphone app. The bottom line is that category was too unwieldy for city employees. Ok, that makes sense from a budgetary and practical standpoint. The options we now have are abandoned vehicle, graffiti, parking meter, parking violation, pothole, sidewalk – damaged/broken, sidewalk – snow/ice, streetlight, traffic sign repair, traffic signal timing, traffic signal trouble, and call 311.

What’s missing, especially for those of us who really care about housing issues? I’ll give you a hint: It has to do with housing issues. That’s right. There is no option for anything at all related to housing. Traffic signals apparently warrant three separate categories though.

Here is the most nonsensical part to the changes. For anything that’s not covered by the categories listed above, the smartphone link instructs users to call 311. Which defeats the entire purpose of having an app in the first place. A smartphone app should be usable 24/7, but calling 311 can only be done from 7 a.m. to 7 p.m. Monday through Friday.

I can understand if the 311 app won’t be all-encompassing for each and every item that warrants a call. But there is a city website for 311 reports and an an email address as well. Those, obviously, don’t have restrictions on the days or hours during which they can be used. If I want to use the 311 phone number during regular hours, I’ll just dial 311 on my phone. If I’m using the app outside of either regular hours or available reporting options, the catch-all tab should direct me to the website or email address. As it stands now, I have almost no reason to use the app.

An aside: The original photo for this blog post was taken by John Hoff, but I haven’t been able to load it up properly. It shows me with my cell phone, attempting to use the 311 app to report a housing item, and being unable to do so. The Hawkman made a “311 face” at 311 itself, which I think has been foretold in a Mayan story about Quetzalcoatl as a sign that the world will end on December 21, 2012. Minneapolis, please correct this problem and prevent the end of the world. Thank you.