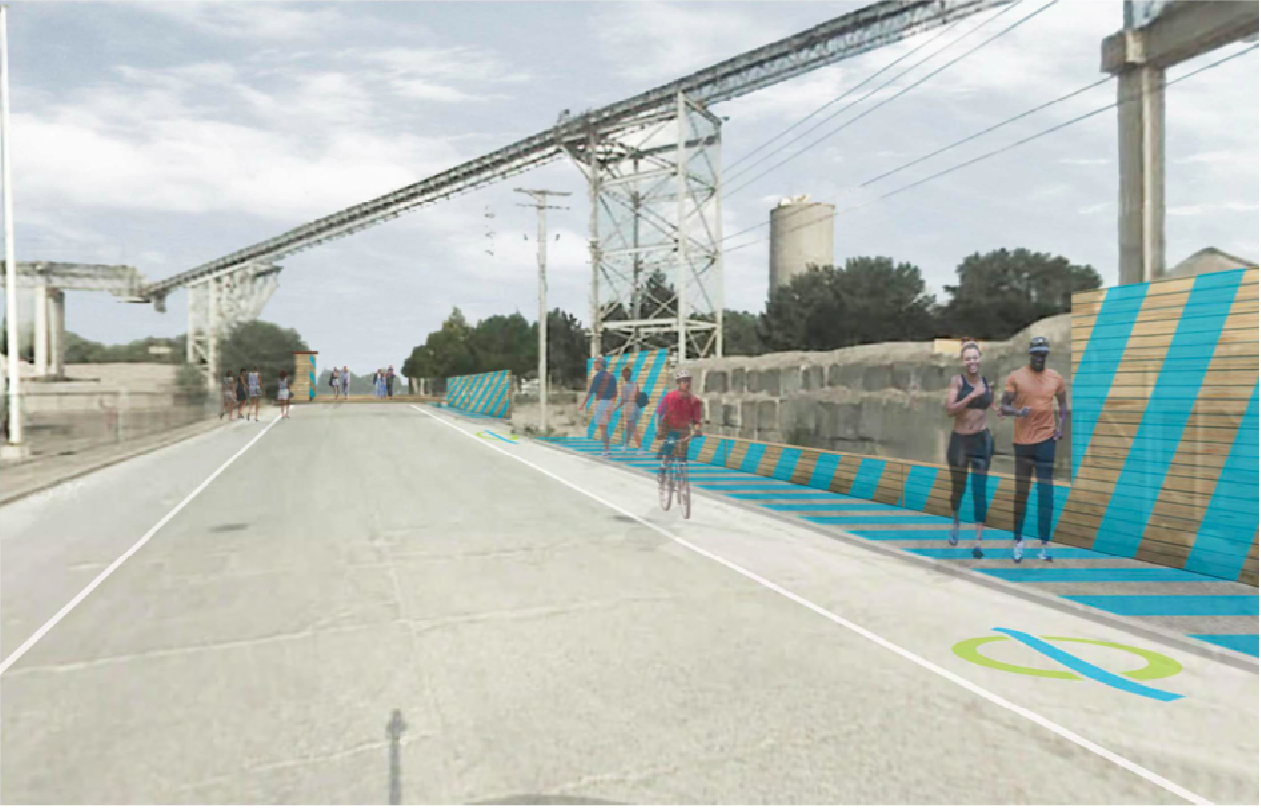 Above, close-up example of boards and paint to be used to mark trails, “wayfinding.” (Graphics courtesy of RiverFirst)

Last year’s fantastical visioning hits this year’s harsh realities as the RiverFirst design team digs in to get about half-way done with the schematic design work necessary to price out the upper Mississippi River plan, the plan for the area between North and Northeast Minneapolis along the banks and into the neighborhoods.

The Minnesota Department of Natural Resources (DNR) and the United States Army Corps of Engineers (USACE) in October 2012 drew a line against sand, saying that no further money should be spent on reclaiming Hall’s Island from the former Scherer Brothers site.

At an update presentation January 17, planners said they’ve modified the proposal to address the DNR and USACE rule that no fill be used unless to benefit habitat. Where the original vision was for a built-up, active island including a man-made pool, the new island is much flatter, with three zones—flood plain forest, emergent habitat and wet prairie habitat. It’s more like a preserve with human access, part of a chain of trails.

The new plan would have a wider channel between the island and shoreline. That “back channel” is seen as an important slower moving launch point to the larger river, and it’s designed to collect sediment naturally to strengthen the island but not require dredging.

The presenters said DNR and USACE staff “informally do not endorse its habitat viability. No formal response has been received.” They asked people to express support for restoring Hall’s Island by filling out comment cards or contacting the Department of Natural Resources, Keith Parker, director of the Central Region, keith.parker@state.mn.us.

On a more hopeful note, the team talked, as they have in the past, about the Upper Harbor Terminal in North Minneapolis as the “low hanging fruit.” Council President Barb Johnson stopped in to say with the end of the barge operator’s contract coming at the end of 2014, there’s a sense on the Minneapolis City Council that the land is too valuable to continue in that use. It’s a 40-acre site they’re now looking at for how much should be developed as parkland and how much as other uses.

The other Northside focus considered an immediate priority: bringing people legally down to the river along the extension of 26th Avenue to a pier. Graphics show what looks like a lava flow of stone blocks forming steps down the riverbank. An audience member questioned why, with the dusty, noisy, smelly current industries in that area would anyone want to walk there.

Sheila Kennedy answered that they’ve addressed, “How can we move people, in an interim phase, to find their way to the river?” And when they get there, what they experience may result in faster change.

The team unveiled a “kit of parts for wayfinding” or “paint and scrape” as Kennedy put it, wooden shelters and fences painted with a teal-ish blue wave pattern to create an “interim condition” for five miles of new public trails. They superimposed these images on familiar roadways (top graphic).

The team talked about solving some of the challenges to accessing river trails directly from the bridges. An auto-friendly bridge is built such that it extends up to two or three blocks into a neighborhood. At Lowry Avenue, for example, the team found a way to bring a stair from the newly built bridge, around the pumphouse and retention pond, creating a landscape amenity that also helps filter water.

They mentioned having figured out retrofits for the BNSF (near 18th Ave. NE) and Plymouth Avenue bridges, though a previous published report said they were stymied at the Broadway bridge.

“What money do you have in hand and what is the Phase I budget?” asked Mike Rainville. Because of grant applications and other fundraising approaches, it’s hard to say, but Bruce Chamberlain, assistant superintendent for planning at the Minneapolis Park and Recreation Board, said at minimum there’s $20 million in five-year capital improvement program funds from the parks for the combination of Above the Falls and the Central Riverfront. This means about $4.5 million in 2014.

Others pointed out that there are other specific projects underway such as $1 million in trails on the east side of the river between the Plymouth bridge and the BNSF. In the Central Riverfront, a group is raising funds for what they call Water Works. The planners have said they welcome these projects under the RiverFirst umbrella.

Graphics from the presentation will eventually appear on the website, www.riverfirst.com. 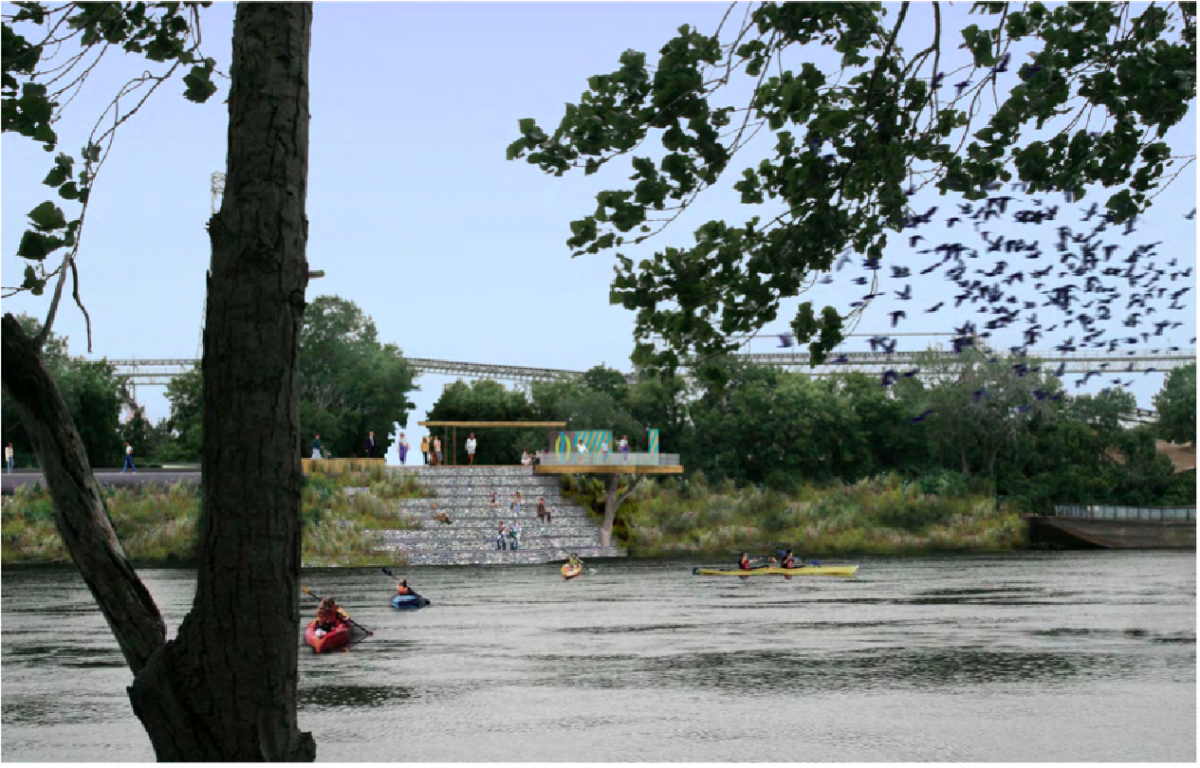 The theme is repeated on the overlook for the proposed steps down to the river at the end of 26th Avenue North. Below, an idea for bringing pedestrians and bikes up to the Lowry bridge connection more directly from the river. 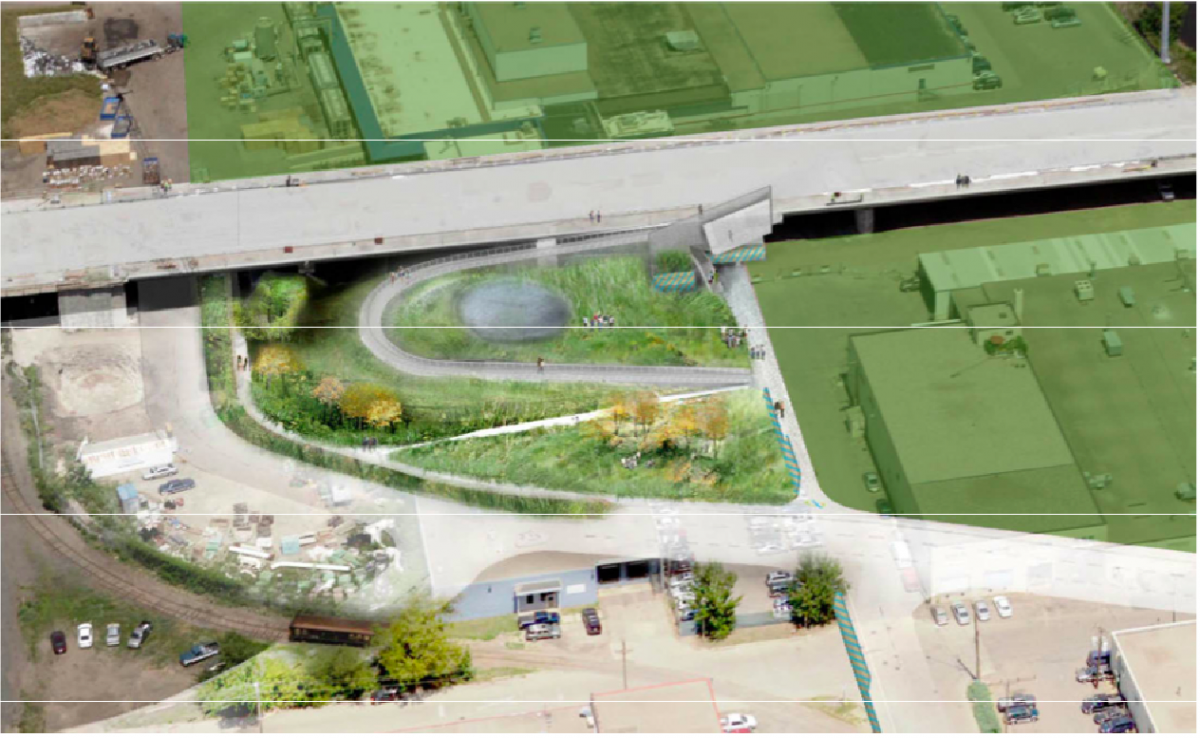 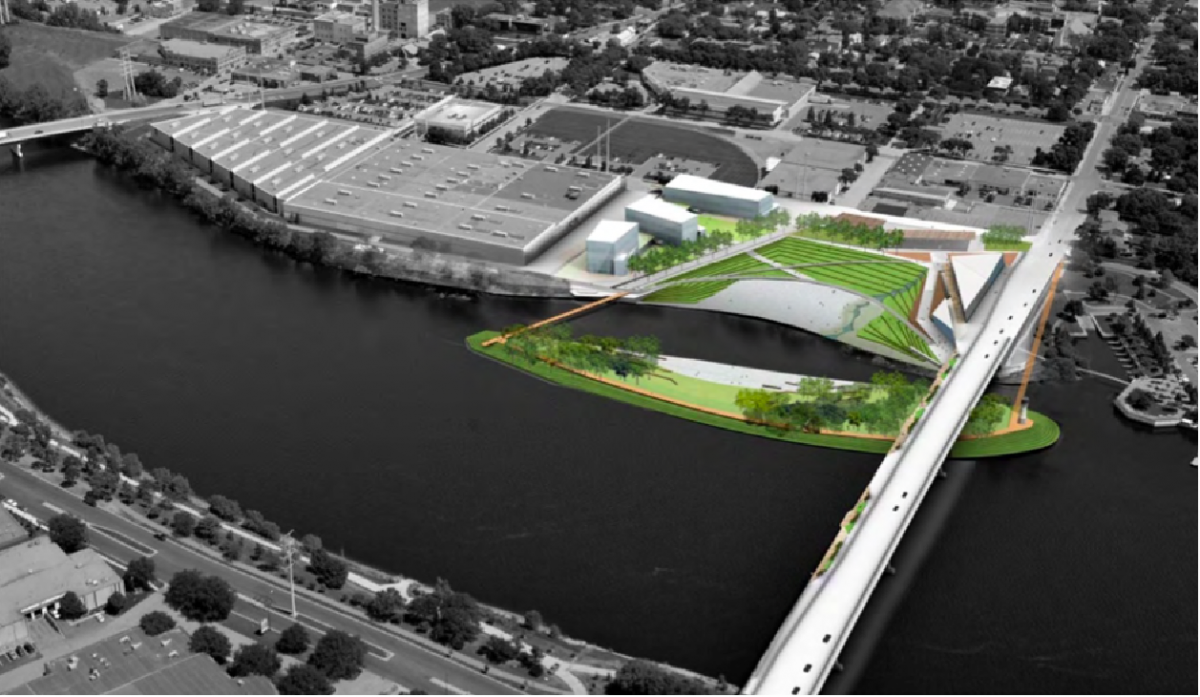 Above, the proposed Hall’s Island reclamation as part of Scherer Park, the river channel providing slower-moving waters. This is the plan so far not allowed by the Minnesota Department of Natural Resources and U.S. Army Corps of Engineers.