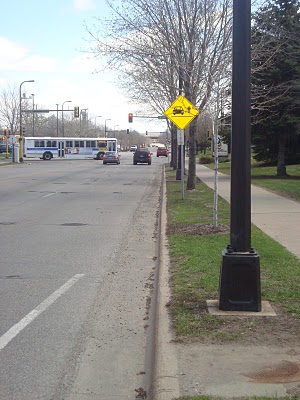 By now the news has made its way around the interwebs, but Bicycling Magazine has named Minneapolis the best bicycling city in America. While that’s great news for the city as a whole, we still lag behind in NoMi. Heck, we don’t even have a bike shop yet. There was a public meeting April 8 the Plymouth Christian Youth Center to discuss just that.

Pictured above is another area in NoMi that should be more biker-friendly. This is the intersection of Plymouth and Girard, down through Emerson/7th. Plymouth overall is a great biking corridor. But this one spot has a dedicated bike lane that just ends. As soon as it ends, we have a bus stop and a turn lane for some major intersections. There are a few other spots like this in Minneapolis and in NoMi, so the design itself isn’t an aberration. However, from a biking safety standpoint, this is where a clearly marked bike lane is needed most. Every time I bike through here, I get nervous that I’ll be squashed by some idiot who’s not paying attention.

There are worse bike lanes, and clearly mistakes sometimes get made. And then there’s THE WORST. So this block is like the Keith Retiman of bike lanes; not the best, not the worst.

Another NoMi resident told me about an area by Dowling and Washington where the accumulated sand from the winter near this industrial zone has made the bike lanes unsafe to ride on. I went and confirmed this is indeed the case. I’d put up photos, but there’s only so much you can do with a pile of sand to make it look cool. Sweeping the streets over there should be a quick fix though.

So what else in NoMi could be better for bicycling? Have at it, JNS readers.