Minne, maybe the Twin Cities’ most lovable, seasonal work of public art has reappeared in Minneapolis.

Minne is a 13-foot fiberglass sculpture created by Minneapolis artist Cameron Gainer, who was inspired by the infamous 1934 “Surgeon’s Photo” of the Loch Ness Monster. Minne first made a splash in 2009 when she mysteriously appeared in Lake Harriet. In subsequent summers, she visited a number of the city’s lakes, including Powderhorn Lake, Lake of the Isles, Lake Hiawatha, and Brownie Lake. Prior to her 2009 adoption and naming by the Parks Foundation, Minne also made appearances in Brooklyn, N.Y. and Tampa, Fla. “Minne has truly captured the imagination of Minneapolis residents and visitors. Children and grown-ups alike wonder in seeing her for the first time, and she continues to captivate even after many sightings,” said Mary deLaittre, President of the Minneapolis Parks Foundation. “Public art is like the modern day campfire. Community members naturally gather around intriguing, approachable pieces like Minne.”

This is the first time that Minne has cruised Wirth Lake, a popular swimming, fishing and canoeing destination at the heart of Theodore Wirth Park, which straddles Minneapolis and Golden Valley and draws visitors from throughout the region.

Gainer, who moved to the area five years ago, said through his sculpture, he is able to bring people together.

“It (Minne) surprises people and encourages them to go to places they have never been,” he said. “The idea is moving around the lake system. In partnership with the Parks Foundation, (Minne) also helps celebrate the parks in Minneapolis.”

The piece is made of fiber glass, aluminum and is hand carved. 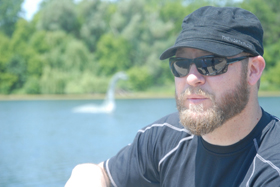 Left: Artist Cameron Gainer and Minne in the background

“The title when I first made (Minne) was underscore, left score, and bracket ( _[ ). These are key strokes on the keyboard; one is a low line hash mark, then the left square bracket. When you type them together, it makes the shape of the sculpture,” said Gainer.

The sculpture also serves as a healing process for the area. According to deLaittre, the choice of Wirth Lake highlights the fact this area has gone through change and is on the rebound since last year’s tornado. The sculpture is situated directly in line with the path of the devastating tornado.

A first in 2012: Minne will moor in a single lake for the entire season. In previous years, Minne has visited two or more Minneapolis lakes (there are 16 total).

Minne will sail Wirth Lake exclusively through September – a first both in terms of location and duration of stay.