In Minnesota, mayors from the Iron Range to the Twin Cities took a bold step to support low-wage workers. They are urging the state legislature to raise the minimum wage to at least $9.50 with increases for inflation. These mayors are also urging local leaders in other parts of the state to follow suit.

“A minimum wage increase would put more money in the pockets of Greater Minnesota workers, helping expand the economy in rural Minnesota and on The Range,” said Hibbing Mayor Rick Cannata.

“Minneapolis enjoyed a strong recovery from The Great Recession, but we know that many people were left behind,” said Mayor Betsy Hodges. “We have some of the largest gaps in the country between the haves and the have nots, and that includes a gap in wages. Our city, our state and our country need to do something to address the soaring inequity. Raising the minimum wage is crucial to ensuring that people who work for a living, can make a living.”

“We have an opportunity to act in the next few weeks here in Minnesota to provide relief for our low wage workers,” said Mayor Chris Coleman. “We must ensure wages keep pace with the basic cost of food, housing and other necessities.” 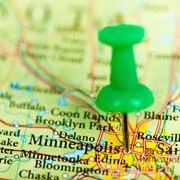 See what impact a $9.50 minimum wage would have in other Minnesota cities. (pdf)

Statewide, 77 percent of people impacted by the $9.50 minimum wage are 20 and older, dispelling myths that teenagers would be the main recipient of the increase. It would also go a long way in supporting working families, boosting parental wages for 137,000 children.

A wide body of national research also disproves fears shared by some opponents that increasing the minimum wage would cause mass business closures and layoffs. A 2010 study published by Harvard’s Review of Economics and Statistics, comparing states’ border counties nationwide shows that states with higher minimum wage have no negative employment and strong positive earnings impacts in low-wage sectors.