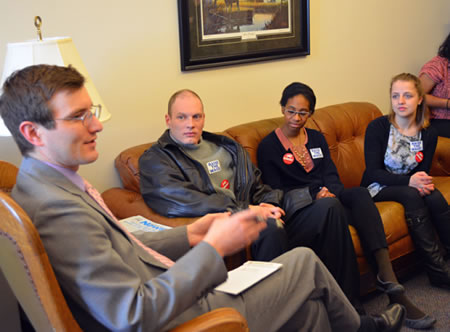 The state legislator spending a week on minimum wage met Thursday with three Minnesotans for whom the minimum-wage challenge is an everyday reality. Four days into his five-day walk in the shoes of the state’s lowest-paid workers, Rep. Jason Metsa listened as three minimum-wage earners related the experiences Metsa wouldn’t have during his five-day experiment.

Things like health care, housing costs and the unpredictable nature of most low-wage jobs – those are the challenges Avita Samuels, Janiece Watts and Robert Schiff shared with Metsa, the DFLer from Virginia, Minn., who accepted Working America’s challenge to live a week on Minnesota’s minimum wage of $7.25.

A bill in the Minnesota House would boost that minimum wage to $9.95 per hour. Seeing it become law, Samuels said, would mean more than a bigger paycheck; it would mean respect for the work she does.

“I take pride in my job. I want to do the best I can,” the 23-year-old retail worker told Metsa. “I don’t want to have to ask for a higher minimum wage, but I have to.”

Metsa’s minimum-wage budget of $290 assumes a 40-hour workweek, but that’s rarely a reality for retail workers like Samuels and Watts.

Samuels, a student at the University of Minnesota, juggles work with school. Watts, who works in a grocery store, found herself in a similar situation until she graduated last year.

Now she juggles work with trying to find another job. “Every so often I pick up some extra hours, but most of the time I work 24 hours per week,” the 24-year-old said.

Schiff, a 31-year-old security worker, supports four children, ranging in age from 8 months to 12 years old, with his minimum-wage job. Metsa asked how he juggles fixed costs like rent and food with unexpected expenses like medical care.

“Most of the time those medical expenses go on the back burner,” Schiff acknowledged. “When you’ve got four kids, you’ve got to pick and choose. There are times when your kids have to go without because you’ve got to pay rent.”

Metsa and Working America organizer Chase Brandau search online for rental housing that would be affordable for a minimum-wage earner.

Trying to find rental housing is a steep challenge for minimum-wage workers – something Metsa learned firsthand a day earlier, when he tried finding apartments available for $359 per month. That’s the amount Metsa, using the JOBS NOW Coalition’s Family Budget Calculator, allowed himself for housing.

Using a search engine that collects data from several online apartment postings, Metsa found eight options in his initial search of the Twin Cities. Most were senior-living facilities or vacation units that rent by the week.

He tried calling the property manager of an apartment complex in Woodbury, but the number listed was no good. The only remaining choice was to sublet a room in a four-bedroom house for $325 per month.

Still, there was a catch. To inquire about the sublet, Metsa needed to pay a finder’s fee to the website.

“I’m finding a lot of these intermediaries,” Metsa said. “I think I’d rule out an apartment search online pretty quickly. It would be easier to network with friends and family to cut a deal, maybe stay on someone’s couch.”

That’s a fairly common strategy, according to Bree Halverson, statewide director of Working America. As the AFL-CIO‘s community affiliate, Working America represents 300,000 non-union Minnesotans, including many who work minimum-wage jobs.

“We know members who are living with family or friends while they try to find something else,” Halverson said, adding that Internet access, security deposits, utility costs and credit checks present more barriers to affordable housing for low-wage workers.

“The bottom line is if you’re on this budget, you have to get help from somewhere, whether it’s family or friends or public assistance,” Chase Brandau, a Working America organizer based in Minnesota, said.

Schiff, Samuels and Watts, of course, know that better than most. Schiff said he’s gone to his mother for help with groceries. Samuels talked about pleading with supervisors for the flexibility to take another job. Watts admitted she’s “lucky” to be on her parents’ health insurance.

“You end up having to swallow your pride,” Schiff said.

Metsa pledged to pass along the workers’ stories to his colleagues – and do his part to “raise the amount in each of these columns,” he said, pointing to a chart with his $290-per-week budget broken down into basic needs.

“This budget would be a constant juggling act,” Metsa said. “What do I give up today to get what I gave up yesterday?”