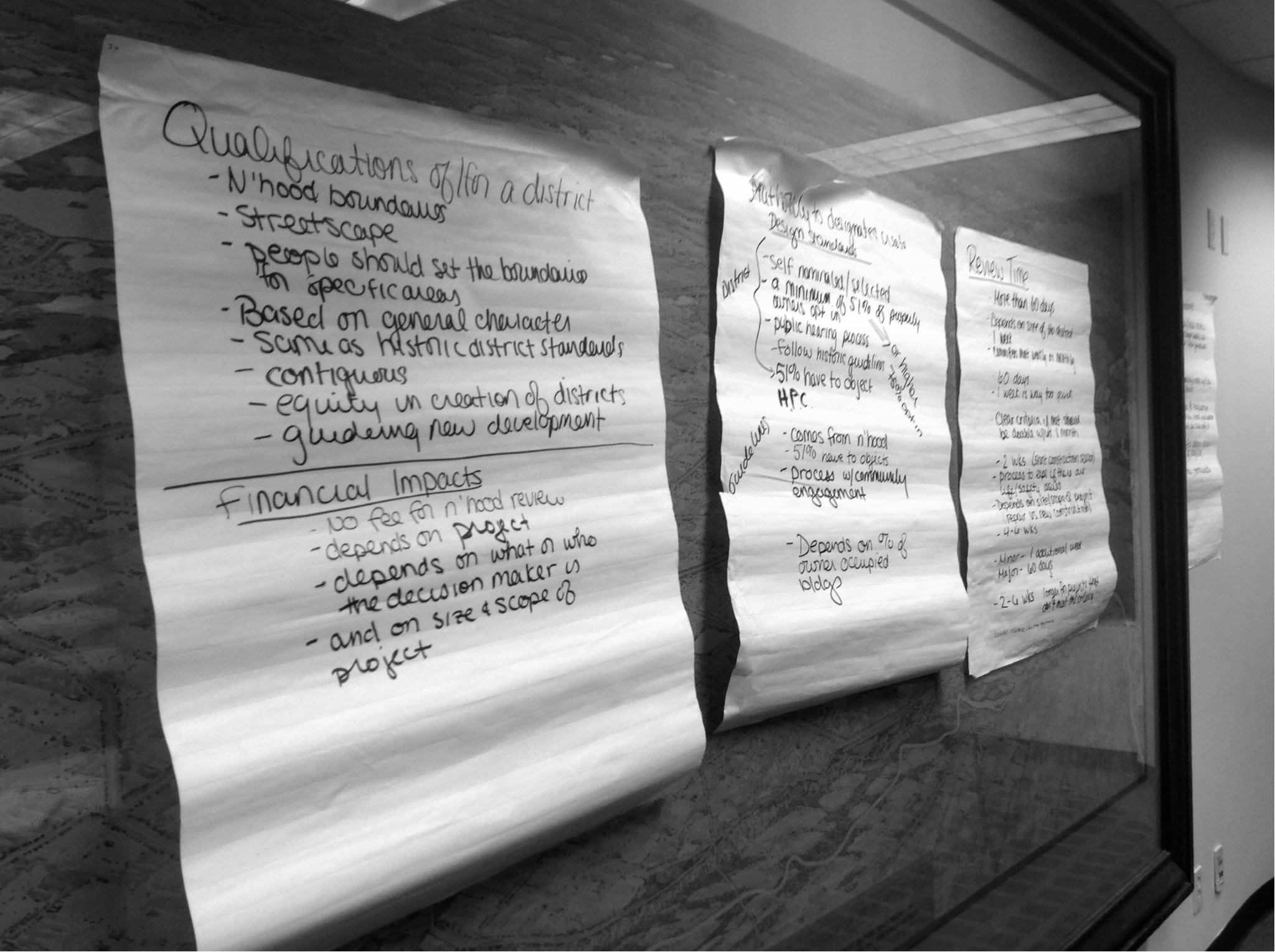 Suppose you live on a block where the houses are all from the same era, and a developer wanted to buy up a couple of dilapidated houses, tear them down and put up a “McMansion” or an apartment building. A proposed ordinance would give you and your neighbors a way of conserving the aesthetic appeal of your block without making it too difficult to make repairs on your own houses.

At a public meeting Jan. 28 about creating conservation districts in Minneapolis, discussion focused not on whether the ordinance should move forward, but on how it should be drafted to provide property owners the best chance at conserving the aesthetic appeal on their block.

“This would make it so that it’s not black or white, you’re either historic or you’re not,” said First Ward Council Member Kevin Reich. “You might have a row of worker homes that are part of the local lore. This would be a way of recognizing them, but not to the Smithsonian level. It provides some flexibility for older areas.”

The impetus for the ordinance, according to City Planner and meeting facilitator John Smoley, is to create a self-nominating tool for a group of property owners in Minneapolis to create development guidelines in their district when they see development happening at an undesirable pace or scale. Second Ward Council Member Cam Gordon sponsored the ordinance as a result of residents’ opposition to high-density housing in part of the Prospect Park Neighborhood.

Reich noted that the purpose of the ordinance is not to stop development, but to protect significant properties. “If this is looked upon as a tool to avert redevelopment in a gratuitous way, it’s not a great tool to stop development. There’s still going to be criteria. You still have to make a case.”

“Additional regulations would ensure that new development is context sensitive, meaning that the development would fit in with the visual character of its surroundings,” said Smoley. Conservation guidelines would focus on visual characteristics including architecture, development pattern, scale and landscape. The ordinance wouldn’t change permitted uses but could limit attributes like height and bulk.

A district would need to include at least one complete block face with two or more principal buildings. Most of the properties in the district should have common aesthetic attributes.

Smoley said city staff hope many of 55 potential historic districts identified in reconnaissance-level surveys would qualify as conservation districts, which could lead to designation. “This could be a great stepping stone to formal designation,” said Reich, “or for some this will be a final destination.”

Bottineau Neighborhood Association Chair Mariam Slayhi said she supports conservation districts if they would be beneficial in keeping the identity of Northeast. “That’s what draws people here to Northeast, there are some historic buildings,” said Slayhi, who owns a couple historic properties including an1892 duplex on Marshall Street NE. She also likes the idea of height guidelines. “I wouldn’t want a three-story apartment building built next to my house.”

Each approved conservation district would have its own guidelines, written by planning staff and property owners, to regulate exterior alterations of notable attributes common to the district and would identify changes that require review or a public hearing, such as new construction or the addition or removal of floor area.

While most at the meeting didn’t oppose the ordinance, one builder did, stating, “I look at it as a nightmare from a builder’s end,” adding, “I think it’s wrong for the neighborhoods to dictate what people can build or remodel.” He said guidelines should be included in zoning and said the ordinance would affect supply and demand. Lot prices are already going up in the city and, “if we get too much land that is restricted, it will make the other land more expensive.”

Some meeting participants countered that preservation gets a bad rap. “Heritage preservation is maligned as anti-growth,” said one. “We embrace growth but in the context of preserving what we have.”

About 40 people attended. Many were concerned about a two-thirds consent requirement. “The two-thirds would render this ordinance useless. Getting that kind of buy-in would be difficult,” said one participant.

“Absentee landlords are generally against everything,” said another.

As written, the ordinance requires consent from one-third or more of all tax parcels to apply for a district study and two-thirds to move guidelines forward for review. The state historic preservation office, the City Planning Commission and the Heritage Preservation Commission would review the guidelines, followed by a public hearing and recommendation to the City Council.

Several speakers suggested changing the two-thirds requirement to 51 percent. Participants also discussed the pros and cons of property owners opting-in versus opting-out, and whether consent for multi-property owners should be counted per property, as drafted, or per owner. Smoley noted that some districts might include only a small number of properties and that previous discussions had supported “true consensus” for creating a self-nominated district.

Language for the first draft originated from input at a kickoff meeting in November 2012. Development Services staff, along with a technical advisory team that included 20 community members, drafted the language.

Another suggested change to the current language was changing a 10-day notice requirement for neighborhood groups. Commenters noted that the process would need to move quickly enough to meet the pace of fast-moving developers but slowly enough to provide adequate notice. Several said the proposed 10-day notice was not long enough.

While not as popular as historic districts, other cities have implemented conservation districts. In 2011, the Prospect Park and East River Road Improvement Association partnered with the Center for Urban and Regional Affairs on a report studying conservation districts in the United States. “Alternative Forms of Historic Designation: A Study of Neighborhood Conservation Districts in the United States,” is available online at: http://www.cura.umn.edu/publications/catalog/npcr-1331

Reich encouraged residents to be broad-minded about what are important characteristics to preserve on their block. “Entry points van be very informal,” he said. “Engaging neighbors in a conversation about what is significant is a powerful way to build community.”

The official comment period for the Minneapolis ordinance ended Feb. 4, which is when staff planned to begin working with Council Member Gordon on possible changes. Input, however, Smoley said, will continue to be accepted.

Once a new draft is finalized it will go to the State Historic Preservation Office, the Minneapolis Planning Commission and the Heritage Preservation Office for review before being sent to the City Council for a vote, which is expected sometime in the late spring or summer.