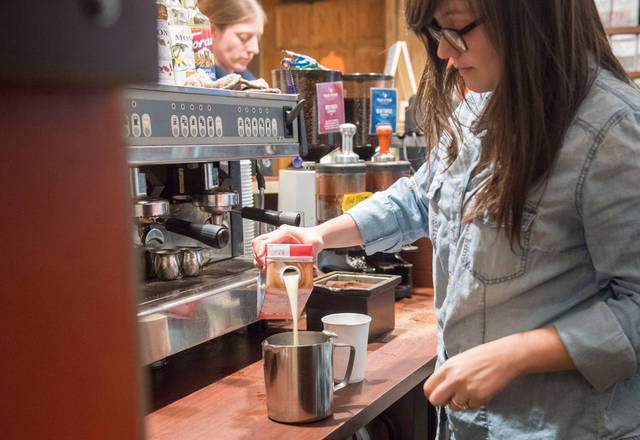 (Photo by Zachary Bielinski) Barista Allison Noble makes a drink with soy milk Monday, Nov. 10 at Bordertown Coffee. Local businesses say they are trying to avoid increasing their prices while the cost of milk rises.

Though it was a price increase of about 30 cents, Miller, the manager of Bordertown Coffee on 16th Avenue Southeast, said that extra money adds up for the shop, which goes through about 45 gallons of milk each week.

As milk prices across the nation swell, local businesses, said Miller, are doing their best to keep prices reasonable while still managing to make a profit.

Though Miller said the coffee shop is managing just fine, he said he thinks rising milk prices will contribute to a small increase in drink prices sometime next year.

Because independent businesses like Bordertown and Espresso Royale usually don’t have extra money to dip into when facing large cost increases, they’re forced to raise prices.

“In a small business, when you have margins that are as thin as they are — and the margins are very thin in small business,” Miller said, “there isn’t a lot [of money] to take … out of like a profit side of things.”

The rising prices are tied to an increased international demand for the U.S.’s milk supply, said Marin Bozic, an applied economics assistant professor in the College of Food, Agricultural and Natural Resource Sciences.

Since milk is produced at an unpredictable rate and can’t be stored for very long, he said, its price is generally linked to other dairy products like cheese, which has a longer storage time.

U.S. farmers have some cows that produce milk for sale within the country and some that produce it for international sales. But in recent months, more countries began demanding American milk, which has strained the product’s availability here in the states, he said.

While the restaurant’s dairy products, including its cheese and the chain’s signature “3-cheese queso,” have slightly risen in cost during recent months, Gast said other changes in Qdoba’s overall pricing, as well as the cost of steak, present larger issues for the restaurant.

“It tends to be one of those things … that fluctuates more than other products,” he said. “[But] when it’s a sustained rise, you definitely notice.”

Though the prices may not climb at Espresso Royale, Zielske said coffee and milk tend to have the largest pull on the shop’s prices.

The cost of milk fluctuates so much, Bozic said, because dairy farmers can’t just will it out of their cows, and it expires quickly.

“Supply cannot change much if needed; demand wouldn’t budge much if needed,” he said. “And if anybody sneezes, the prices can go up really high or really low depending on if we have a shortage or a surplus.”

After a heavy demand for a commodity like milk, Bozic said, it takes a few months for prices to catch up. So though international demand for milk has waned in recent months, he said, prices in the U.S. should continue to rise until about January and should return to normal by the end of 2015.

“This is like turning around an aircraft carrier,” he said.

Miller said the price bump won’t be detrimental for Bordertown but has unwelcome implications for the immediate future of the shop.

“Right now I think we’re OK,” he said, “but that extra 40, 50 cents a gallon definitely is going to cut into what we would normally pull in.”