Earlier today I was at the annual meeting of an organization I’ve long been part of called the Minnesota Alliance of Peacemakers. One of the group rose to ask the speaker a question about the new proposal relating to drones in Thief River Falls MN. More information is here.

Back home, on the evening news, was the continuing story of the drone that went down in Iran, and whose wreckage is now in Iran’s custody. Much ado is made of this event.

Google “drone” and there are over 9,000,000 results. No doubt, it is a new and permanent and controversial feature of warfare.

Given the far more deadly alternatives – nuclear, invasions with wholesale and wanton killing, and similar – I’m not inclined to get very upset about the role of drones in the modern world. Without any doubt, they, like any other device, are subject to abuse, but over all, they could reduce substantially the indiscriminate killing of innocents that has always been the standard of warfare up through the Iraq and Afghanistan Wars, a war which was especially deadly to Iraqi civilians. (Here’s a conservative estimate of Iraqi deaths (not even factoring in all their other huge losses in that ugly war) which was catastrophic to the U.S as well.

Given the choice between use of drones and precise targeting and an atomic bomb, there’s no question in my mind drones would be preferable.

Given my personal druthers, there would be no war. Period. But given the nature of humans, particularly those humans who seem to rise to the top of power pyramids, it seems unlikely that we will ever reach the nirvana of real and lasting peace.

The best we can do – and it is the best – is to continue working towards a more peaceful world, through peaceful means.

However limited, there is room for conversation among people willing to listen to each other, and considering other points of view. But one can’t have such a conversation in separate rooms.

As I listened, today, my thoughts went back to a little article I’d seen before in the college newspaper I was privileged to edit. The article was one of those that could be used for filler, and appeared in the opinion page, May 24, 1961. This was four months after Dwight Eisenhower’s famous farewell address including his concerns about the Military-Industrial Complex, and John F. Kennedy took office as President of the United States.

Here’s the article in its entirety. Fifty years later, it remains current. 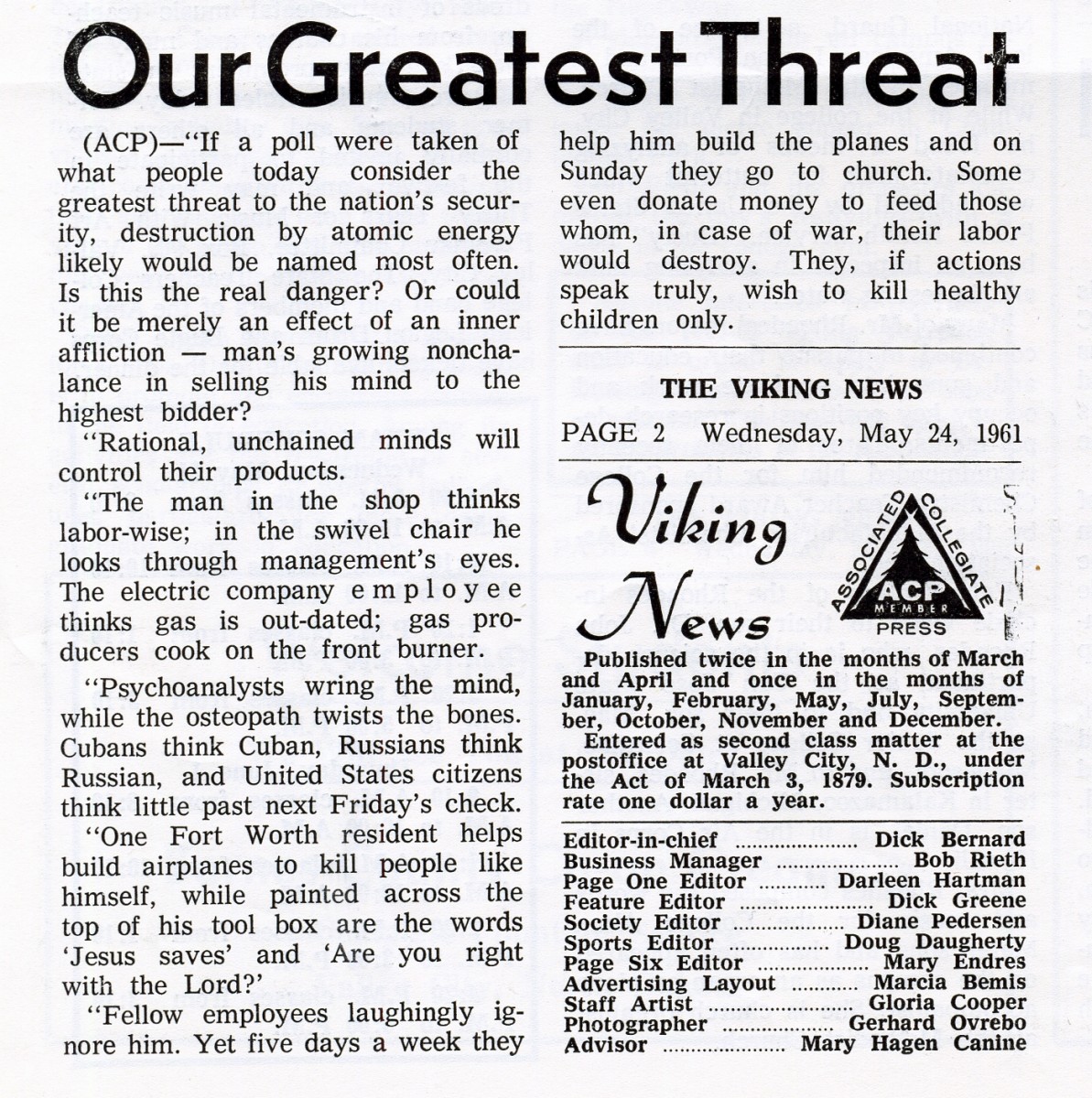 Sitting at the same table with me today was John Noltner, whose new and excellent book “A peace of my mind: exploring the meaning of peace one story at a time” includes interviews and photos of 55 people.

I particularly noticed the pages (42-43) featuring former Minnesota Governor Al Quie (1979-83). Mr. Noltner added comments as follows: “Al doesn’t believe that we can ever achieve world peace because of our competing political, economic, and belief systems. He believes the broke human condition will prevent us from achieving total peace. But Al believes in working towards inner peace and peace within communities….”

We may never reach the destination of the ideal of peace, but one person at a time we can help the process along.