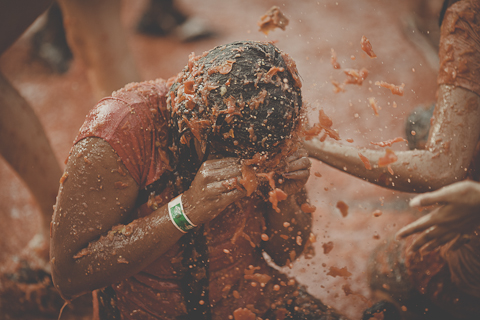 It was a scorcher at this year’s Midwest Tomato Fest on Saturday, July 14 with temperatures reaching well into the 90s. But that didn’t stop the party. The staff kept everybody chill with frequent shots of ice-cold water from cannons and super soakers. The stage was set in the middle of downtown Minneapolis off of Portland Avenue with the gates opening up at noon and music, dancing, and goofing around persisted late into the day. The festival had something for everybody from the crashing beats of Chicago’s Gemini Club, bluesy tunes from The Blend, and the twang of every bodies favorite country tune from Tim Sigler and his band. In between musical sets and during the tomato fight DJ Zeke kept the crowd dancing with some bumping remixes of songs that mish mashed classics such as Guns N Roses “Sweet Child of Mine” with electronic beats and breaks of modern pop and hip hop.

Throughout the day, gigantic beach balls bounced to the beat of the music in the electric crowd. Everywhere you looked there was someone dressed up in the ridiculous to the straight-up hilarious. For those that wanted to take a break from the madness there was a large variety of lawn games to play and a mouthwatering beer garden with drinks from local breweries. It was the end of the day that concluded with the most epic food fight of the year that stole the show.

Pure chaos erupted as the buzzers rang out and the red war began. Hundreds of people raced to the middle of the arena that was piled with 250,000 over-ripened tomatoes that ripped into the sky. People wearing white tee shirts that happened to be in the first wave right out of the gate were covered from head to toe in red pulp. I personally took a few blows to the head and soon realized why everyone around me was smart enough to wear goggles. But the sting in my eyes did nothing to diminish the blast I was having. By the end of the food fight there must have been almost six inches of tomato soup simmering in the arena.