The Corcoran Neighborhood Organization called a press conference yesterday to announce some good news about the Midtown Farmers Market at Lake St. and Hiawatha – it’s bigger and better this year, and its future seems more secure.

More than 50 Minnesota and Wisconsin farmers have signed up to sell produce at the market this season, along with some 20 crafts vendors and about 10 prepared food operations. The number of vendors at the market will grow over the course of the growing season, but already this Saturday you can expect to find locally grown strawberries, lettuce and bedding plants, as well as lamb, chicken, eggs and cheese, bread, pastries and pickles. 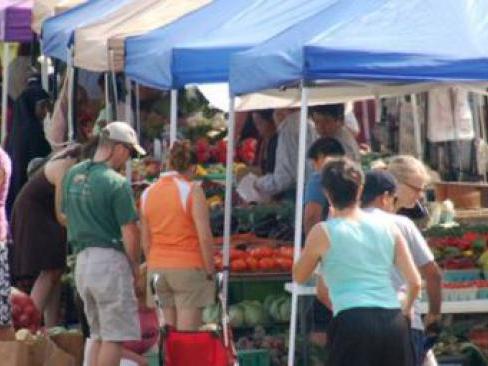 For the past few years, the market’s future has been in doubt. The market is located on a six and a half acre site owned by the Minneapolis Public Schools, and has operated year-to-year while awaiting a decision about the future use of the property. The good news is that the market has been written into MPS’s plans for redevelopment, and will be included in the request for proposals that the school district sends to developers.

The site of the press conference, Gandhi Mahal restaurant at 3009 27th Ave. S. turned out to be a very appropriate choice – according to acting market manager Amy Behrens, chef-owner Ruhel Islam buys a lot of his produce at the market.