The Midtown LRT/Streetcar has joined the growing number of high efficiency corridors planned for the Minneapolis, St. Paul metro area. The Midtown LRT/Streetcar will run on the Greenway rail trench from the planned SW Green line station at W Lake Street to the Lake St station on the Blue line. Though the transit in the greenway is being classified as a streetcar, the fewer stops and connections to both the Green and Blue line means that it will function more as a light rail.

It will be paired with Bus Rapid Transit (BRT) on Lake Street that extends all the way to St. Paul. It will connect with some of the busiest north-south corridors: Green Line, Hennepin, Lyndale, Nicollet, Red Line BRT on 35W, Chicago Ave, and the Blue Line. This route would also serve some of the densest areas in the region. Outside of the two downtowns, this is the east-west route with the most job and housing density. 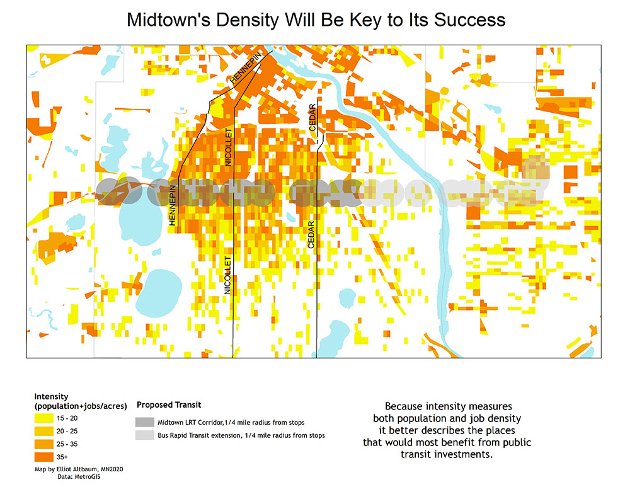 Because of the dual corridors of the Greenway and Lake Street, the route could be built in stages. BRT involves much less physical infrastructure and capital to develop so it could be built first. As funding becomes available, the LRT/streetcar can be built. After the Central Corridor, this is the next best rail investment that the region can make because it connects the densest housing in the state with job centers while also connecting neighborhood amenities.

This corridor has proven its viability through the high ridership of existing bus routes. This is an important future transit planning point. If we only build a train line every 8 years (6, if we’re hopeful), then each line must be done right to maximize our investment. Current ridership on existing local and express bus lines should be an indicator for which routes would most benefit from the expanded service or rail. Besides improved service, an expanded bus system generates insightful rider information, further honing long range transit planning.

The Midtown corridor has proven itself as a successful bus route that merits additional investment. it is included on the Met Council’s 2040 transit plan, the TPP. Let’s make sure that this corridor receives more attention and moves up the list of planned routes.