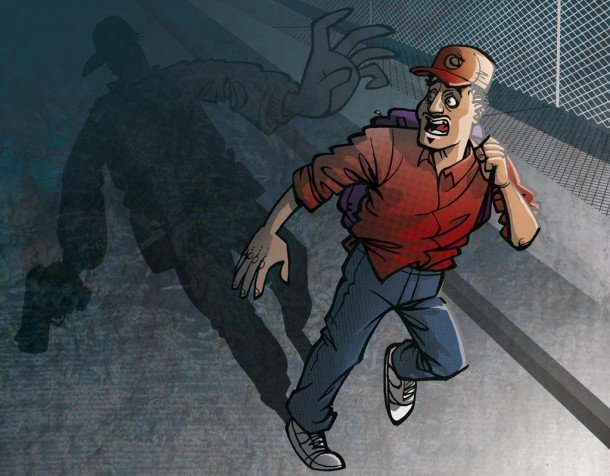 During my twenty years of living I have made some really good and really bad choices. The worst choice I made was getting involved in gangs and drugs, which led to my unwilling trip to Mexico and life-changing events. Being in a gang is like playing chess: Only the king and queen survive, while the rest are and always remain pawns.

A gangster life does not suit my personality in any way, shape, or form. I was born in a small town in Mexico, the size of four football fields, so coming to the United States as a child of migrant workers had a lot of influences on me. I was the oldest and alone in a big world. In seventh grade my only friends were my books and my cousin. I became closer and closer to the “Surenos,” a well-known Mexican gang also known as “SUR 13.” Walking down the hallway shaking hands and throwing gang signs up like fireworks on the Fourth of July made me feel popular, and made me feel protected. I was young and stupid back then, getting into fights for a simple word or the difference between black and blue. Now I realize it wasn’t me fighting—it was my so-called friends pushing me to the bathroom, grabbing my arm, and punching their enemies.

The fight—the fight that broke my nose—was when I realized I was in someone else’s shoes. It was too late; I was already dancing in the small, crowded, stinky bathroom. As I was pounding his face and busting his lip open I stopped, and everything froze. A voice deep inside my head told me, “What the hell am I doing here?” This was not me. My rival got smart and took advantage of those few seconds, cracking my nose and filling the bathroom floor with blood. Getting home and seeing my mother cry ripped my heart in millions of pieces. She made me see that I was doing wrong, but it was too late. Next thing I know, I’m on flight 412b heading to Mexico.

Sending me to Mexico was the hardest but smartest choice my parents ever made. In those six months I found myself making new friends and forgetting about my old ones in the gang life. I became more confident in myself and away went my mile-long blue belt and with it the old me. Even then when I was over the gang life, my blood still fired up when I saw a rival. I felt the rage of beating him up vibrate under my skin. It’s not easy changing lifestyles—you need patience and you need time. After six months I returned to Minnesota and began high school. I was done with the gangster life. The time I spent in Mexico gave me time to think and realize that I had put my family and myself through a lot of pain. Now I’m a new, better, and improved person.

Coming to a new country had blinded me. My new friends and their way of living had closed my windows to the rest of the world, closed the door that led back to my culture. Coming to the U.S.A. knowing barely enough English to ask where the bathroom was, coming from a four-room middle/high school and entering a two-story mile-long middle school, was shocking to me. Having no family member attending school with me, I felt like an ant in the middle of a safari. Adapting was hard for me so I put aside my background, my people, and my poverty. I started hanging out with the other Mexicans in the school, but there was something different in them—something that I did not have. Little did I know it was evolving. They were gangsters, feared and respected in school. My mom always told me not to get involved with those kinds of people. She always reminded me where we had come from and how difficult it was to get here. But I was way past brainwashed; their long blue belts with the shining chrome tip had looped me and dragged me away. You see, that’s what gangs do: they go after the new kid in school, the innocent, scared immigrant like me that just arrived. They eat you alive and spit you out into their dangerous world. Going back to Mexico and spending time with my lost loved ones made me truly realize that I did not need to be in a gang to be famous or happy. All I needed was my family and my soul. Spending time in Mexico with my grandma in her small house made of rocks was something special. She was the most important person. She made me realize that I was doing wrong. Even though we’re not rich, and we sleep on pillows stuffed with old jeans and tee shirts, people were always visiting her, and she knew everyone in town.

In life you go through challenges, and going through the gangster world was challenging for me. It’s not easy to change lifestyles; it takes time and patience. It took me six months to figure out that my weak and fragile side had taken over and sent me down the wrong path. Now when I see a gangster I crack up at their joy of being in a gang. I laugh not because it’s funny but because that used to be me, and it’s sad to see that more and more kids are joining gangs for any reason they can make up. But as I’ve gotten older and wiser, I’ve become a much better person, holding down a job and attending school—getting my life back together.

Jesus Vega “was born and raised in Guanajuato, Mexico, and came to the United States at age five. I currently attend Gordon Parks High School and am finishing my credits from Johnson High School, so I can move on to college. I work a full time job after school to help my parents with the bills and for my own needs. I love playing sports and being outside in the summer—I’m still getting used to the crazy Minnesota winters. I love spending time with my fourteen-year-old sister and seven-year-old brother, taking them sledding, shopping, to the zoo, and Valleyfair.”