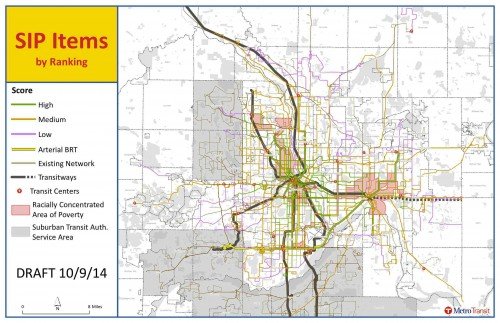 Amid all the clamor over the Southwest LRT, and the high profile planning for Bottineau LRT and various BRT projects, a big transit system game changer has been quietly progressing under the radar. It’s Metro Transit’s Service Improvement Plan.

For decades the funding for bus service improvements has been stagnant, sometimes keeping up with inflation, and sometimes falling short of that. There has been new money for rail thanks to the quarter cent sales tax that goes to the counties, but when it comes to buses, Metro Transit has had to squeeze new service out of existing dollars. That means trimming the least productive services and reallocating those bus miles. This is a big reason why Metro Transit ranks so high in every cost effectiveness index compared to peer cities. But the actual size of the bus system has barely grown since 1980.

Depending on the election outcome, the 2015 legislative session may finally increase the transit sales tax and might even let Metro Transit administer it rather than the counties. If the stars align and that actually happens (we’re been disappointed over and over), there needs to be a transit plan for spending that money. That’s the Service Improvement Plan.

It’s a highly detailed list of higher frequencies, greater spans of service, routes changes and new routes. It doesn’t include the rail lines and BRT’s, just the regular old buses. It was developed with considerable citizen input. The draft plan just showed up on the Metro Transit website. To see it, go to www.metrotransit.org/sip.

The plan is extremely detailed, which may deter some from reading through it. However, some trends are apparent.

One surprise is that the plan includes the feeder buses to the Southwest LRT and the Bottineau LRT.

Note that this plan doesn’t include the opt outs, only Metro Transit.

Your input is being solicited between now and November 30, so get your comments in.

At top: The map of the draft Service Improvement Plan