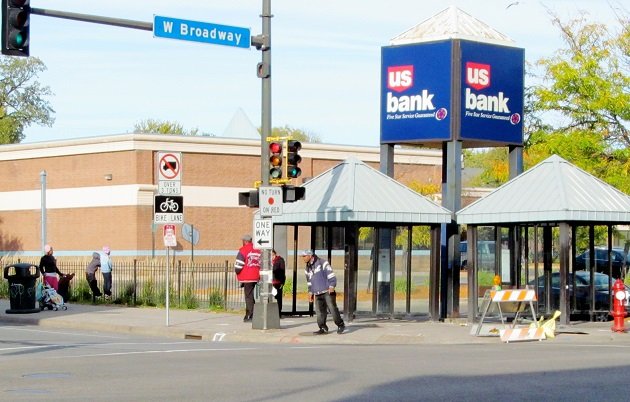 (Photo by Sarah Ellen Miller) Transit and Econ Development Organizer for Harrison Neighborhood Association Michael McDowell said this stop on West Broadway and Emerson gets more than 200 riders a day, but doesn't have heat. He hopes the new program will consider it for renovation.

A new goal to construct and renovate bus shelters in low-income neighborhoods has been met with skepticism rather than excitement from some community members.

Metro Transit announced through Metro Council last week that they are the recipients of a $3.2 million Ladders of Opportunity grant — part of which will be used to construct and renovate bus shelters in Minneapolis and St. Paul by the end of 2015. Officials said with more and better shelters, they hope to increase ridership, and improve safety and comfort.

“The goal is to install up to 150 new shelters, add amenities such as heat and light at up to 75 existing locations and to replace 75 to 100 shelters in Minneapolis that were privately owned and maintained until earlier this year,” said Metro Transit Public Relations Specialist Drew Kerr.

Kerr said that the grant will be combined with a local match of $815,000 from Metro Transit, contributions from state legislature, and money left over from the Green Line Project. Altogether, he said, they should have $5.8 million to fund shelter improvements.

Kerr said Metro Transit has identified north Minneapolis and east St. Paul as areas to focus on. “We know there are certain barriers to taking public transit and we want to have resources that are equally accessible throughout the region,” he said.

The bus shelter project will be part of a larger effort to increase transit equity within the region, said Transit and Econ Development Organizer for Harrison Neighborhood Association Michael McDowell, which has been a long-standing issue for areas like north Minneapolis and east St. Paul.

“It’s great that this has finally become an issue,” McDowell said. “Over the last few years, fare has been going up but the service hasn’t improved at all.”

Frequent transit users residing in lower wealth communities of color face hardships like rising cost of fare, lack of amenities at stops and long distances between stops, he said.

Metro Transit will be reaching out to community groups for input over the next few months, Kerr said, which will be critical to determining the needs of the communities they may be serving.

“We are asking, ‘How can metro transit be more responsive to their more dependable riders?’” Adams said. “These are the people who are deserving of the best amenities, and I think there is general agreement about that now.”

Kerr said individuals can provide input during the planning process by going through their neighborhood organizations.

But Adams said there are concerns that the effort will not be enough. “Even if this gets close to solving parts of the problem, we still aren’t close to getting a network of heated shelters,” he said.

The goal is to maximize the resources, and then decide fairly which areas need heated shelters most, he said.

Site assessments will be done according to Metro Council standards, said Caleb Murphey, a Minneapolis resident involved in the transit equity campaign. This includes the number of riders waiting at a stop per day, the amount of available space on the sidewalk and any utilities present to provide heat or light, he said.

But Murphey said he’s skeptical over their standards. For instance, he said, suburban stops near affluent white neighborhoods only need 25 riders a day to merit a shelter, but inner city stops, which are often surrounded by low-income families of color, require 40 riders.

Murphey said he’s also skeptical the project will help north Minneapolis. Metro Transit has said they’d build more shelters on the Northside before, Murphey said, but rescinded before the projects were complete.

“The lack of specificity is concerning,” he said. “They have emphasis on RCAPs more in media than in actions. There is a lot of lip service being given and a lot of dancing around the bush.”

“The safety issue during the long Minnesota winters is not that there is not a shelter,” Phillips said, “but that getting on and off the bus can be a dangerous proposition when passengers have to climb over mounds of ice and snow.”

Busses are often the primary mode of transportation for the elderly, disabled and, especially in north Minneapolis, for mothers with small children, Phillips said, and for these individuals accessing the bus in the winter is difficult and potentially dangerous.

Murphey said he’s worried Metro Transit and Metro Council will cater to high-income residents rather than the communities that could use the help. He surveyed over 500 people with Harrison Neighborhood Association last summer, he said, and the results showed that his frustrations aren’t uncommon.

“The pervasive mentality is that people are fed up, but they don’t have any other options,” he said. “We don’t take public transit as an option, we take it as a necessity, and it feels like this is being exploited by Metro Council.”

This story was written by a Twin Cities Daily Planet intern for the TCDP college internship program, in partnership with HECUA.