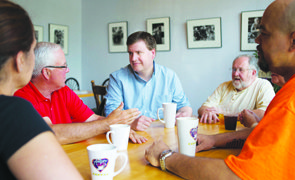 One of the most closely watched Congressional races of this election season is happening right here in Minnesota, where DFLer Mike Obermueller is seeking to replace Republican incumbent U.S. Representative John Kline. Kline’s Congressional District 2 covers the south Twin Cities metro area, including all of Scott, Dakota, Goodhue and Wabasha counties and such cities as Burnsville and Eagan.

Obermueller, a former member of the Minnesota House of Representatives, unsuccessfully challenged Kline in the 2012 election. Now Obermueller is making another run for the seat, but this time he has attracted national attention, largely due to support from comedian and host of HBO’s Real Time Bill Maher.

Maher, who donated $1 million to Barack Obama’s successful presidential re-election campaign, has set his sights on helping Obermueller defeat Kline with his recently launched “Flip A District” contest. Maher asked his viewers to cast their lots for the worst member of Congress, and Kline was the lucky winner. Maher will be making appearances in the voting district in favor of Obermueller.

Among the litany of criticisms of Kline’s voting record comes his record of consistently voting against or obstructing measures that benefit communities of color: perpetually standing with those who are committed to obstructing any bill proposed by or supported by President Obama; voting 54 times to repeal or defund the Affordable Care Act (widely called “Obamacare”), which has provided health coverage to large numbers of people of color; voting against raising the minimum wage; opposing immigration reform; and opposing other measures that would benefit lower income Americans and communities of color, who far too often are one and the same — all while supporting the interests of the wealthy.

The Spokesman-Recorder recently spoke briefly with Obermueller about what is at stake in next month’s election. Kline’s campaign has yet to respond to numerous interview requests.

Obermueller thinks that the election is important because “we’ve got a lot of fighting and gridlock going on out in Washington, and we’re about to determine whether or not we spend two more years doing that, or we actually have people out there who want to get things done and want to meet the challenges we’re facing in this country.

“We’ve got a relatively small group of folks — 50 or 60 folks in the U.S. House — that are absolutely committed to running the clock out on President Obama and put things off for the next two years.

“Congressman Kline has not stood up to those folks. In fact, he went right along with them as they shut the government down, to prove a political point, I guess, about the Affordable Care Act.

“So what it really comes down to is if we’re going to have a middle class, we’ve got to have a functioning U.S. Congress. We’ve got to put better people in there than what we’ve got right now. That’s why I’m going to win in the fall — people are sick and tired of what’s going on out there.”

While admitting that the Affordable Care Act is “not perfect,” Obermueller does agree that it is nonetheless an important measure for those who could not otherwise afford health coverage.

“Congress has taken 54 votes to try to take this down,” Obermueller stated. “The Republicans are leading that charge, and I believe Mr. Kline has voted each of those times to do that. There’s no alternative plan; he’s [voted for repeal] over and over again although they have no alternative to the Affordable Care Act if it were repealed. I think people understand what would happen if he gets his way in Washington.

“But these folks just spend their time on the Affordable Care Act, fighting about it and talking about how bad it is. But they have no alternative plan, and they just don’t understand the effect it has on real people here in Minnesota. I can’t believe the number of people that have told me their positive ACA stories. People like this law, and Congressman Kline is on the wrong side of history on this one.

“Kline and I have a very different worldviews,” said Obermueller about the minimum wage and equal pay for women for the same work. “He is a ‘top-down’ guy: He wants to give huge tax breaks away to millionaires and billionaires and hope that eventually that works its way down to people at lower income levels. I believe if we want the economy to grow from the bottom or middle up, that means making sure people have money in their pockets to spend in the small businesses that are the real job creators.

“In other words,” Obermueller continued, “the people spending the dollars are the job creators, not the owners of those businesses, because no one is hiring new employees unless they’ve got the money for it. That fundamental difference — his ‘top-down’ approach and my ‘middle-out’ approach — is probably the biggest distinction between Congressman Kline and myself.”

About the minimum wage specifically, Obermueller believes that “If you want a middle class with money in their pockets, then you think ‘raise the minimum wage.’ I think we should raise it up to $10.10 at a minimum. That’s barely enough to feed a family, but at least it would be a big step forward for a lot of families in this country.

“In Minnesota, we’ve already made a little step forward toward that, but we’ve got a ways to go on that.”

Obermueller is critical of Kline’s record on equal pay for women for equal work: “Congressman Kline has made multiple votes against the interests of women’s economic security, [like the] Paycheck Fairness Act, the bill that would prevent employers from firing their female employees for asking how much their male employees make. It’s hard to imagine that that still happens in this country, but we’ve got to put a stop to it because women deserve equal pay for equal work that they’re doing.

“All down the line you can see how he has undermined the ability of people to get a solid job that pays their family’s food bill and [basic needs].”

When asked whether his positions on these and other issues could be considered populist, Obermueller responded that his interest is in “the people who really matter, the voters, and the people who are actually being affected. We don’t want a dialog where only a couple of people have a chance to actually [be heard]. We need to have a vigorous debate about how we’re going to fix problems and get to solutions or to compromise.”

And, he says, “Too many of the people in Washington aren’t interested in finding solutions at all, they just like to fight. I want to get things done. I want to see solutions put in place… People affected by these policies need to have a voice in this debate.”

In response to a question about Bill Maher’s “Flip A District” contest that has put this race in the national spotlight, Obermueller opined, “We’re happy with national attention on our race; it deserves it. Congressman Kline’s record deserves a full vetting and a big spotlight. We’re raising some new dollars off of that fact.”

Obermueller also seems to want to downplay Maher’s direct effect: “But it doesn’t really matter what Bill Maher does. What matters is Congressman Kline’s record. What I think that Mr. Maher has done is put a great spotlight on Congressman Kline’s voting record, and that’s Mr. Kline’s worst-case scenario. He doesn’t want anyone to know what he’s been doing out there.”