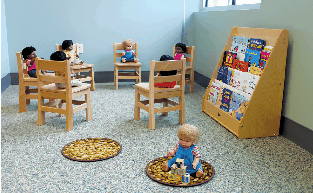 (Photos by Alex Schlee) Therapy classrooms are designed to offer children a safe place where they can cope with the challenges they may be facing in the company of other children and clinicians who can help them heal. Classrooms and offices in the Peter J. King building have all been designed to have wide windows that let in plenty of natural light. Sunlight acts as a natural antidepressant, according to clinician Natalie Kendrick.

Families of children needing mental health services now have a place a little closer to home and certainly more conducive to healing. And families who have been helped encourage those who haven’t yet, to seek help when they need it.

Bright and lofty, the new Peter J. King Family Foundation Children’s Mental Health Building stands at the corner of Dupont and Glenwood Avenues. It will serve as the new home for the Washburn Center for Children, an initiative founded to help serve children with mental health challenges. Serving over 2,700 children who have a variety of mental distresses including depression, trauma, and anxiety, The Washburn Center is the only facility of its kind in Minnesota, dedicated specifically to the study and treatment of children’s mental health.

According to the Center’s CEO Steve Lepinski, 85 percent of children served there return to their normal school schedule after treatment. The number of children served by the Washburn Center has doubled in the past six years. With their old facility on Nicollet Avenue rapidly becoming inadequate, it was time for an upgrade.

“We did really good work there,” said Lepinski at the ribbon-cutting ceremony for Washburn’s new facility on Nov. 21. “But we did it in spite of the building.”

With small rooms, a lack of natural light, a dilapidated playground, and cramped office spaces, the old Washburn Center left both staff and clients wanting better. $24.5 million was raised over four years by the Washburn Center from assorted donors to go towards the construction of their new home at the Peter J. King building, designing it with the specific intent to be the perfect building to house a premiere mental health facility. $2.5 million more was raised to establish a training center for future clinicians within the walls of the Center. 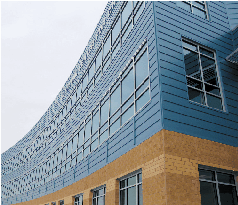 While the center does not offer residential services, the building features a number of classrooms where groups of children can spend time with clinicians in the mornings before returning to school, or in the evenings after school, with 6-7 children in “Milieu” group therapy with 2-4 clinicians at a time. According to clinician Natalie Kendrick, the brighter, more spacious environment allowed by the new building creates a more comfortable environment for children and their families, who can stay with their children and support them during treatment, as it is a process gone through together for many.

Architect Mohammed Lawal said he wanted to design the new facility to look as little like an institution as possible, with wide open windows to let in as much natural light as possible and a nature-inspired floor plan.

“All of the hallways gently curve, so when you’re walking down them you never see more than three doorways ahead of you and the space is much less intimidating, especially for children,” said Lawal. 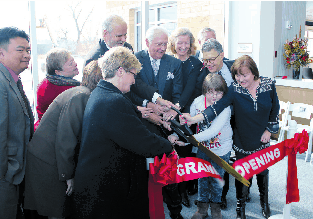 The ribbon was cut on the Peter J. King building on the morning of the 21st, where former clients, their families, and supporters gathered to hear Lepinski give his opening remarks alongside Senators Al Franken and Amy Klobuchar and former WCCO journalist Don Shelby, all of whom supported the funding and construction of the project.

“We’ve had children here who are nine years old and are the adults in their household,” said Shelby. “That takes their childhood away, and here, we give their childhood back.”

Also present was former client of the Washburn Center Anna Kerr and her adopted mother Mary, who told her own story to the gathering. When Anna, currently in the 5th grade, was younger, she was diagnosed with ADHD and was experiencing other emotional issues. Fearing the social stigma revolving around mental health, Mary and her family became increasingly closed off to help until the summer of 2012, when things came to a head. Anna was hospitalized several times throughout the course of the year and Mary wasn’t sure where to turn for help anymore. According to her, she and Anna tried several other therapists before seeking out Washburn, but they had little effect.

“It seemed like it would have worked better for adults than for a child,” said Mary.

It has been two years since Anna began treatment at the Washburn Center. She is no longer being treated and is preparing to graduate into middle school next year.Although she no longer attends the center, she is still thrilled about the new building and all the new space and resources now available to other kids who still need help. Mary is also pleased to see the new center opening, glad to see the kind of support she and her daughter received continuing.

“Washburn gave us our lives back,” Mary said, recounting how frightening a time she and her family once experienced and offering her support to families who may be in a similar place now. “Don’t be afraid to ask for help. Don’t be afraid of the stigma.”