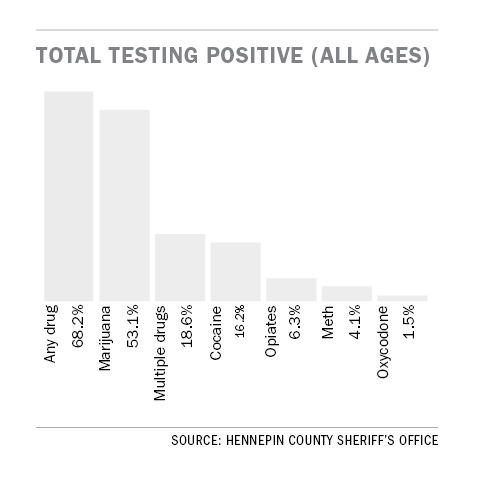 Nearly 70 percent of men booked into Hennepin County Jail had illegal drugs in their system, according to a new federal study from this year.

The study, conducted on behalf of the Office of National Drug Control Policy, showed an increase in prescription drug abuse. The Hennepin County Sheriff’s Office released the results Tuesday, noting that the climbing prescription abuse fits in with a national trend.

Among male inmates 21 and younger in Hennepin County custody, there has been an increase in the use of Oxycodone prior to arrest since 2010.

Oxycodone is a narcotic commonly found in prescription painkillers under brand names like OxyContin and Percocet. While the study from last year showed no Oxycodone use in the 21 and under age group, the number rose to 5.6 percent of inmates.

“We have noticed … over the years that many of the people we deal with in arrest situations do have a substance abuse problem.”

He noted that the arrests made throughout the county generally aren’t University students.

Multiple illegal drugs were found in 18.6 percent of inmate men of all ages. Combining drugs prior to arrest doubled among the youngest inmates.

“I’m concerned to see this increasing at an alarming rate among young inmates,” Sheriff Rich Stanek said in the press release.

Among all male inmates, marijuana was the most commonly detected drug, at 53.1 percent. That particular problem extends into the University campus.

“There’s some marijuana use among students and probably prescription drug use,” Miner said.

In 2010, about 13 percent of University students said they currently used marijuana, according to a Boynton Health Service survey from that year. Reported marijuana use from males was 3 points higher than in females.

“Generally, we don’t come across students that are hardcore drug users,” Miner said. “They wouldn’t have been able to get admitted to the University at that level of a substance abuse problem.”