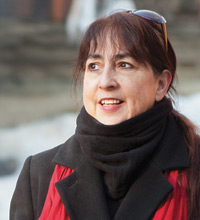 Sisseton Wahpeton Dakota storyteller and media artist Mona Smith is creating a memory map of the bdote area of the Mississippi and the Minnesota Rivers. This bdote (a place where two waters come together) is central to Dakota spirituality and history.

Smith describes the Bdote Memory Map as a series of sites that have special meaning to the Dakota people. “It is a constellation of sites, with the ‘memory map’ website as the hub of the wheel,” she said. “We wanted there to be many ways for visitors to run into information.” Smith is working on this project in partnership with the Minnesota Humanities Center. As a result, videos, still pictures, text, links and blogs are all used to form a picture of places such as Pike Island, Fort Snelling and Coldwater Springs that are a part of Dakota history.

“We as Dakota are often taught two things we need to live a good life,” she said. “Know who you are and know where you are.” Finding the answers to those questions fuels the passion Smith feels for her work.

A few years ago she did a pilot of the project, raised funds and worked with Migizi Communications, an agency that works with youth through many means, including media. “Migizi had workshops about the sacred Dakota sites and had students go out with cameras and video equipment,” Smith said. The workshops taught both media skills and about the history of these sites. As a result, students learned about these places and filmed themselves there, describing what they had learned and its importance to them. Smith produced the interviews of Dakota people, telling in their own words the importance of the sites to them. For example, a Dakota woman tells how she and her father would visit Pike Island and recite a prayer and burn tobacco.

“The purpose of the memory map project is for people to develop their own relationships with these places. That takes time and silence,” Smith said, adding that it is difficult to describe sacred places. “These places become meaningful through time to people through ceremony and long relationships.”

Another of Smith’s projects, Mnisota Makoce 2062, will come about as a result of inviting organizations and individuals to express what they think life will be like 200 years after the Dakota War and mass executions in 1862 at Mankato. Thirty-eight Dakota men were hanged the day after Christmas that year, the largest mass hanging ever held in the United States. At the same time, women, children and elderly men were held in a concentration camp at Pike Island, near Fort Snelling.

The upcoming project will include traditional and modern dance, recording and public presentations, and a story, related by a Dakota elder, on what it was like here for the Dakota people before others came. Smith plans to work with environmental groups and youth groups “whose imaginations are piqued by this idea,” she said.

“Everything is truth telling, to a certain extent,” she mused. For Smith, truth telling, from a Dakota viewpoint, is not playing nice. “It is telling the true history of the Dakota people,” she emphasized.

“To recognize the Dakota people living here is step No. 1 in truth telling. We have to have that first, before finding out about the appalling history.”

Smith regrets that the Dakota people are rendered invisible in their own homeland. Based on her younger years, she understands this disconnect.

“I grew up in Red Wing and when I later moved to Minneapolis, I didn’t understand this was Dakota homeland,” she recalled. “My learning this has made me feel more grounded and with a stronger sense of belonging.”

She finds that Dakota people, like other cultures, describe themselves through storytelling. “I have never found a native person doing a speaking engagement without a personal story in their presentation.”

Smith said she grew up being taught to feel guilty, a story she tries to change every day. “I try to change the sentences in my head,” she explained.

With that in mind, she is excited about Mnisota Makoce 2062. “My hope is that the Dakota will no longer be invisible,” Smith said. “I hope for Dakota ideas and history to come first.” In that changing story, she sees a more sustainable future for everyone.