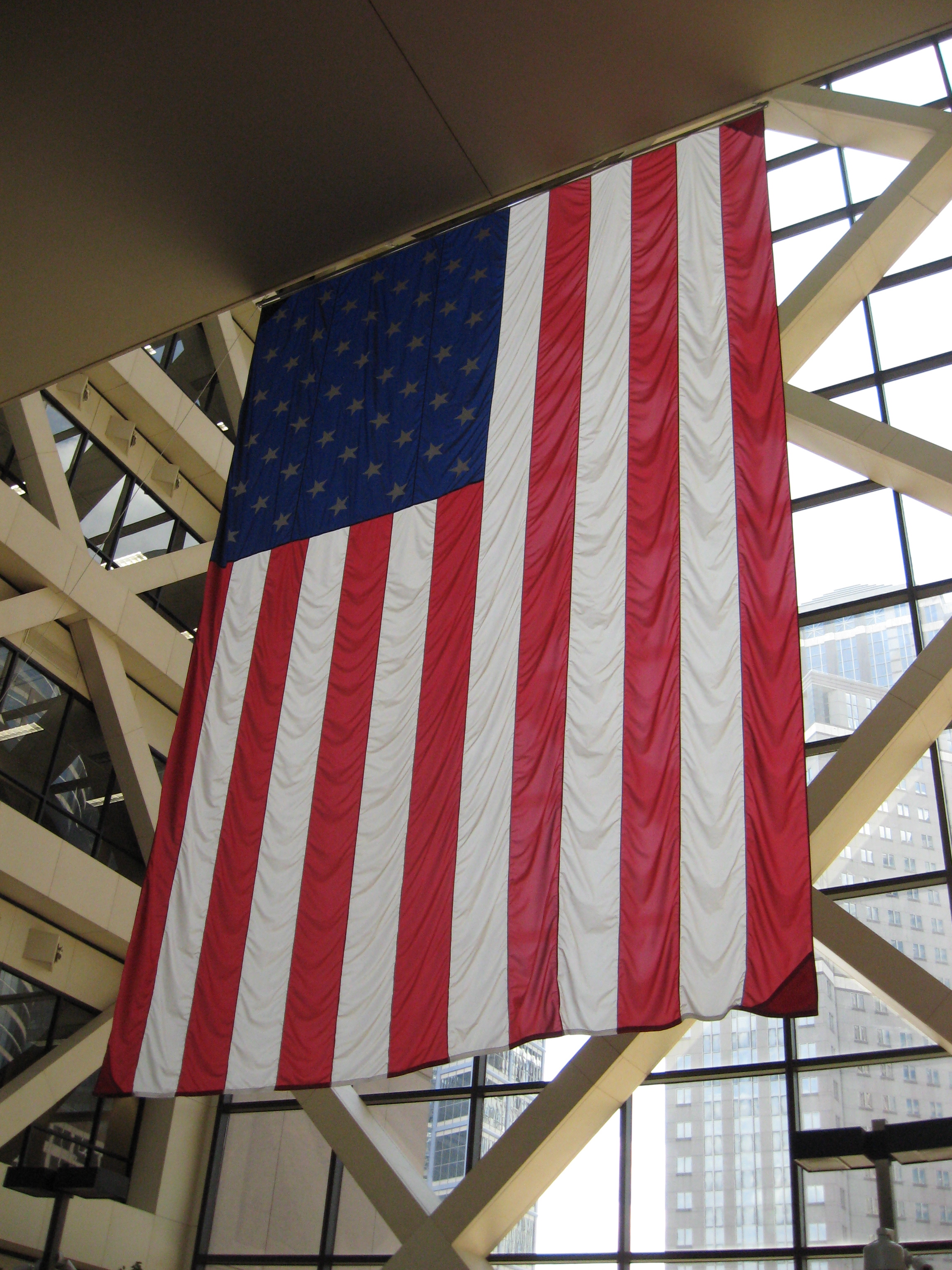 “I decided to ask about the flag. The first person, a receptionist answering the phone, had no idea why the flag was there; the person to which I was first referred had no idea either. The third person I talked to said the flag had been there for years, and had been put up in the wake of 9-11-01: “they had to do something“, she said.”

Memorial Day is an important day for me. I almost always participate in some way. For the last ten years or so, you can find me at the grassy area adjacent to the Vietnam Memorial on the State Capitol grounds in St. Paul (9:30 this morning). Normally there will be about 50-100 there; the original organizer and many of the participants are Vietnam War vets (I’m a Vietnam era Army vet – I didn’t realize that at the time, 1962-63, but I was). The sponsoring organization is Veterans for Peace, a group I’ve long belonged to for many years.

This morning will be a somber, gentle time. There’s “open mike”, and almost certainly someone will pop up to defend war, and we’ll listen respectfully.

It’s that kind of bunch.

Almost certainly, a few feet away from our site, right after we adjourn, the more military remembrance of Memorial Day will take place, uniforms, martial music and the like. This is also a tradition.

The observances are the same, but very separate, marking unity and disunity….

Over 100 miles north of here at Big Sandy Lake, today, my 92-year old friend, Lynn Elling. and his family will dedicate a place for the ashes of his beloved spouse of 68 years, Donna. Donna died last June, and it was a family decision to bury her ashes on this weekend, near their lake cabin.

Lynn, a Naval officer in the Pacific in both WWII and the Korean War, became and remains a lion for Peace, becoming a regular protestor during the Vietnam War and a very large presence for alternatives to War, especially related to Law Day May 1, and Peace Sites. Perhaps a culminating event for him was two weeks in Vietnam last month, with the Vietnamese orphan he and Donna adopted from My Tho Orphanage in 1973. Tod, now 43, went on this grueling excursion with his Dad, April 15-30. It was something Lynn seemed compelled to do, this year. Some of his words about the trip are written at the end of this post.

My memories of war past are quite vivid also. Quite often I remember one or another.

Most recently May 4, 2013, the first Memorial Day I remember came to mind. It was on the grounds of Sykeston ND High School, and it was Memorial Day, 1946. I remember it as a six year old. Others there would remember it differently, including my Dad, whose brother was killed on the USS Arizona at Pearl Harbor, Dec. 7, 1941; or my Uncle George, my Mom’s brother, who had just months earlier returned from three years as a Naval officer in the Pacific, and taught in the high school.

There were the wooden crosses on the ground, and the traditional rifle salute. It was a never-to-be forgotten memory.

And another memory, 36 years later, November, 1982, when by chance I happened to be at the Vietnam Memorial in Washington on the weekend it was dedicated: Bernard card 1982001

That, too, is never to be forgotten.

So it goes. I could add more memories. So could you.

But the conversation needs to go on about what it is we are considering or remembering or celebrating or whatever we are doing this Memorial Day.

This is a prime time to enter, and not leave, an essential conversation of what we are about as a nation: are we a place permanently gripped by fear of possible “terror”; or are we a nation working together towards a time of peace.

If you’ve got some time, here’s a long post I read just this morning which may help bring the debate into focus. It is long, but sometimes long items are useful.

Terror, and it’s first cousins Fear and Loathing, are useful emotional hooks on which to hang the argument for perpetual war.

I think there’s a better way. Indeed, there has to be a better way, otherwise we cease to exist.

The trip that Tod and I took to Vietnam April 15-30 was an incredibly wonderful experience for both of us. The local hardware store owner, Jim Logan, lo and behold, made all of the arrangements including round trip tickets, hotel reservations, etc etc, once we knew what our basic plans were.

We took off from the Minneapolis airport on the 15th and landed in Chicago. There we had a 2 1/2 hour layover and when it was time to head for the gate the captain of our plane identified me and escorted us right ahead of everyone so we were the first to board the plane. The reason for this was that I had written to the CEO of United Airlines and told him our story, which was referred to one of his lieutenants. We were treated royally by UA during more of the flights with them.

We had a 5 hour layover in Hong Kong and got into Vietnam in the middle of the night on the 16th. The hotel was modest but very nice. Very few people, even at the hotel, could speak English but we got along okay.

We ate most of our breakfasts and some of the dinners across the street at the hotel over there–great food and more people who could speak English.

After visiting several key areas in Ho Chi Minh City, which were very impressive, we checked out after 5 days and headed south to My Tho with a cab driver that could speak English. The trip lasted about 2 1/2 hours. Again the hotel was nice and the food was good. After two days of exploring we found the Catholic Church, school and former orphanage that Tod stayed in for his first three years. The Mother Superior and two other nuns provided great hospitality and we had the opportunity to visit several classrooms. The kids went wild over Tod, sang songs and we very friendly though they only spoke Vietnamese.

In most of the areas that we visited they have very few stop signs and the traffic involved motor scooters and bikes going quite fast and carrying a number of people–even small children and babies. In order to cross the street I would hold Tod’s arm and we would start walking very slowly. We never had any problems or witnessed and accidents because they were all very careful not to come too close to us. It was a fantastic experience.

One day we went by boat out to an island in the bay and there went ashore, had refreshments and walked about 2 blocks through the jungle in the rain. We finally came to another boat landing with long, narrow canoes that had seats only about 7 inches from the hull. Can you imagine me trying to get down the stairs and finally sitting down in this boat without falling in the river? I was ready to call it off but Tod said, “Dad, you’re okay. I will help you along.” So I started down the slippery slope, wondering if that might be the end of our trip, but I made it. We took off with 3 other passengers and a female paddler in the front and a male paddler in the back. We went through the jungle and expected to see crocodiles and other wildlife. This is where the Americans fought the Vietnamese during the war and the Vietnamese had a substantial edge. Again, this was a great experience.

UPDATE 11:30 a.m. May 27
Veterans for Peace at Minnesota Vietnam Memorial 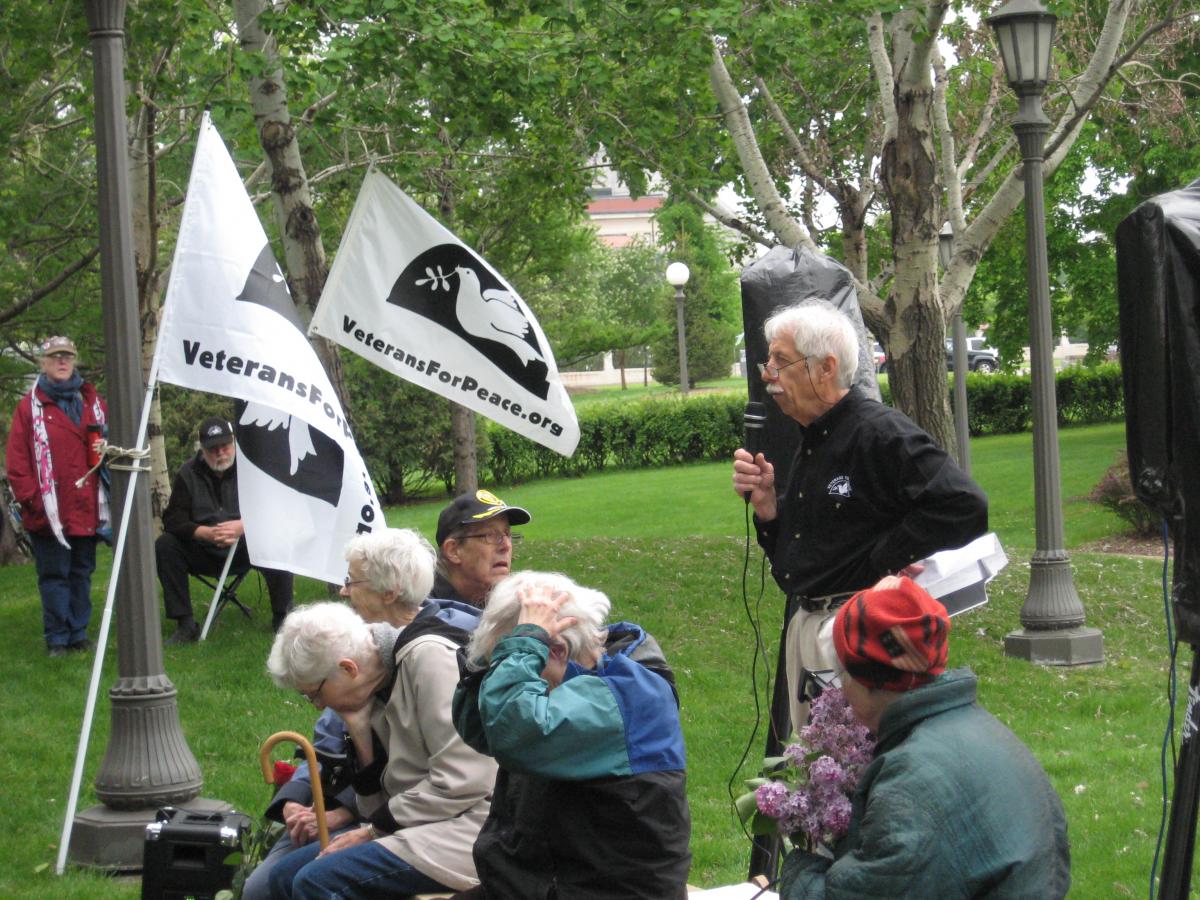 Memorial organizer Barry Riesch set out to lower our expectations this morning. This and that hadn’t worked out: no musicians, guy who was going to set up the sound system hadn’t showed, etc.

I’ve been to a lot of these gatherings. Each year they’ve been better, and this year was the most outstanding one yet. Sometimes that’s how failures go….

Perhaps, tonight on Twin Cities KARE-11 news, you’ll see a snippet from the event. A cameraman spent a lot of time with us today.

Becky Lourey, whose son Matthew died in Iraq eight years ago yesterday, spoke incredibly movingly about her son and survival. During her talk she mentioned going through his duffle bags, sent home to his widow, and finding his poncho, which she took out of a ruck-sack and wore during much of her talk. She shared with all of us a recent e-mail regarding her son, sent to another of her sons. It speaks for itself: Lourey Mem Day 2013001 The website is here. 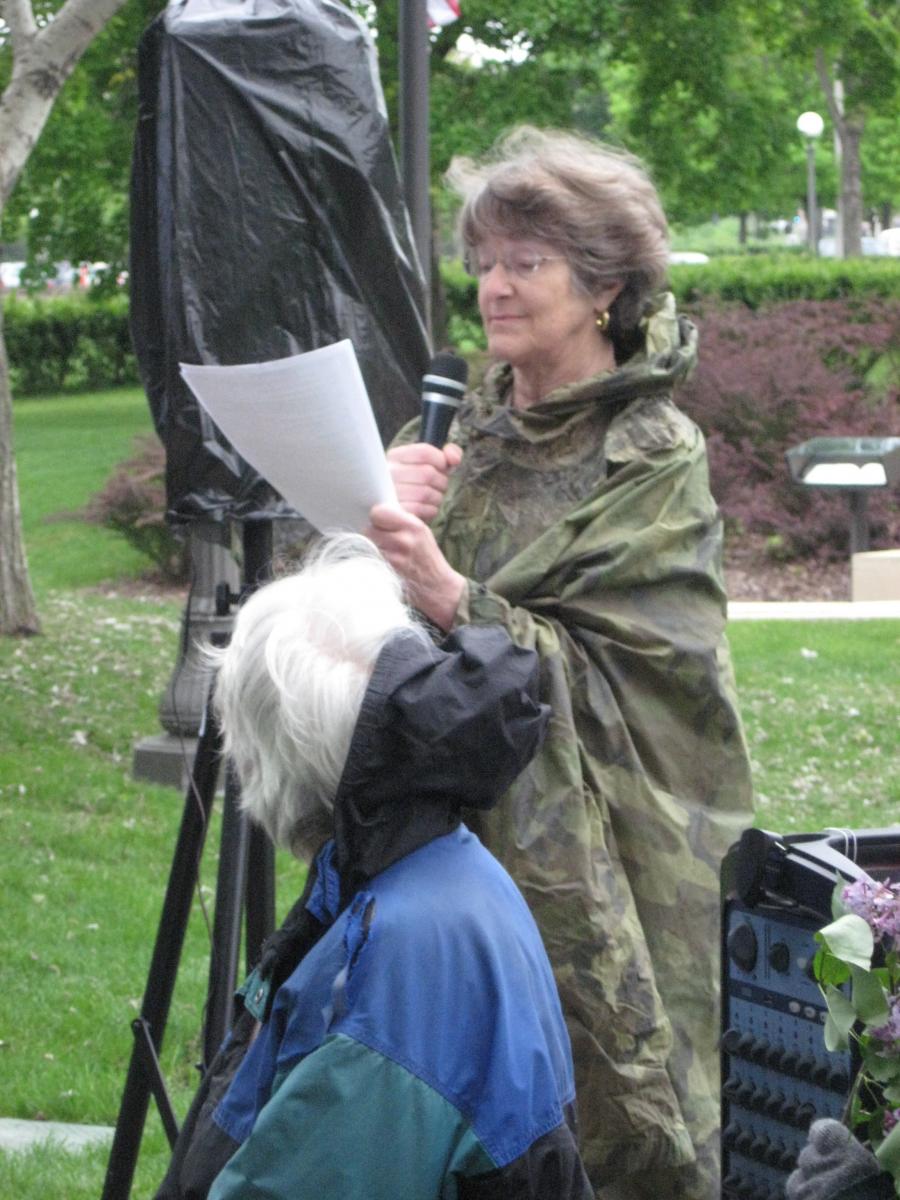 The event closed, as it always has, with a solitary bagpiper walking into the distance playing “Amazing Grace”.

I thought, how appropriate a time to start changing the conversation. But how difficult that will be.

In our culture, to change conversation has come to mean to win, which means someone else has to lose.

You don’t change a conversation by planting feet righteously in cement, but actually listening.

Are we up to the task? 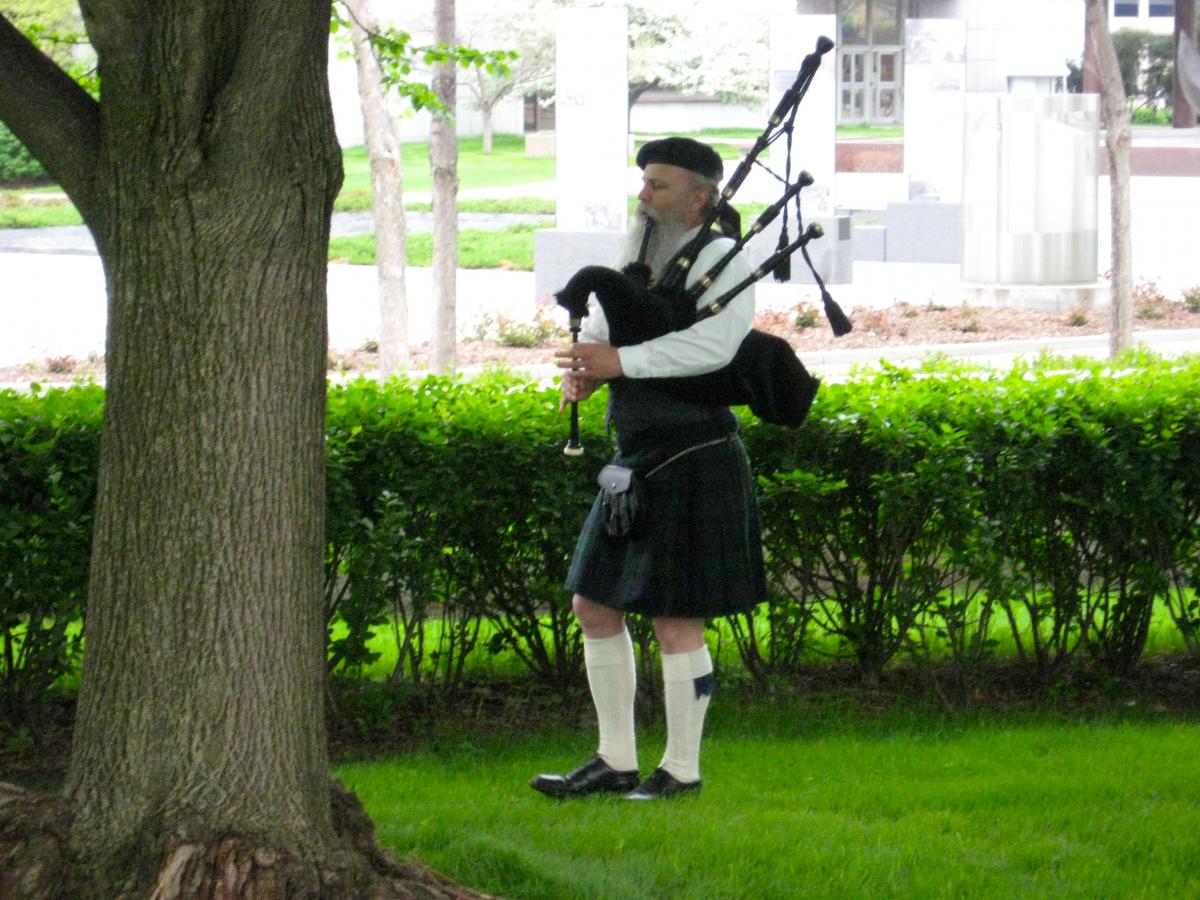 Postnote: There was no dissenting voice today, had there been he/she would have been welcome to speak. The usual event which followed Vets for Peace didn’t happen this year. Likely it was at some other place.