About three weeks ago, my wife and I stopped downstairs after 9:30 Mass at Basilica for our usual coffee and conversation.

This particular day we joined a man sitting by himself at a table. He was a very dapper older gentleman, well dressed, wearing a boutonniere.

We introduced ourselves. He gave his name. I’ll call him Roger.

Roger, it turned out, grew up in an eastern state and was drafted during the worst parts of the Vietnam War. He was a Conscientious Objector, and went into alternative service aboard a Hospital Ship just off of Vietnam during 1968, one of the deadliest years of the Vietnam War.

He told his story that morning at coffee. He came home from the war, and went to work in the medical field. All went okay for something over 20 years, then PTSD (post traumatic stress disorder) took hold. His personal hell was compounded because no one would believe him; he was, after all, “normal” for over 20 years. It took a long and very frustrating time to verify his career-ending disability.*

Later in the week, came a packet from my new friend, including several photos, three of which are below. 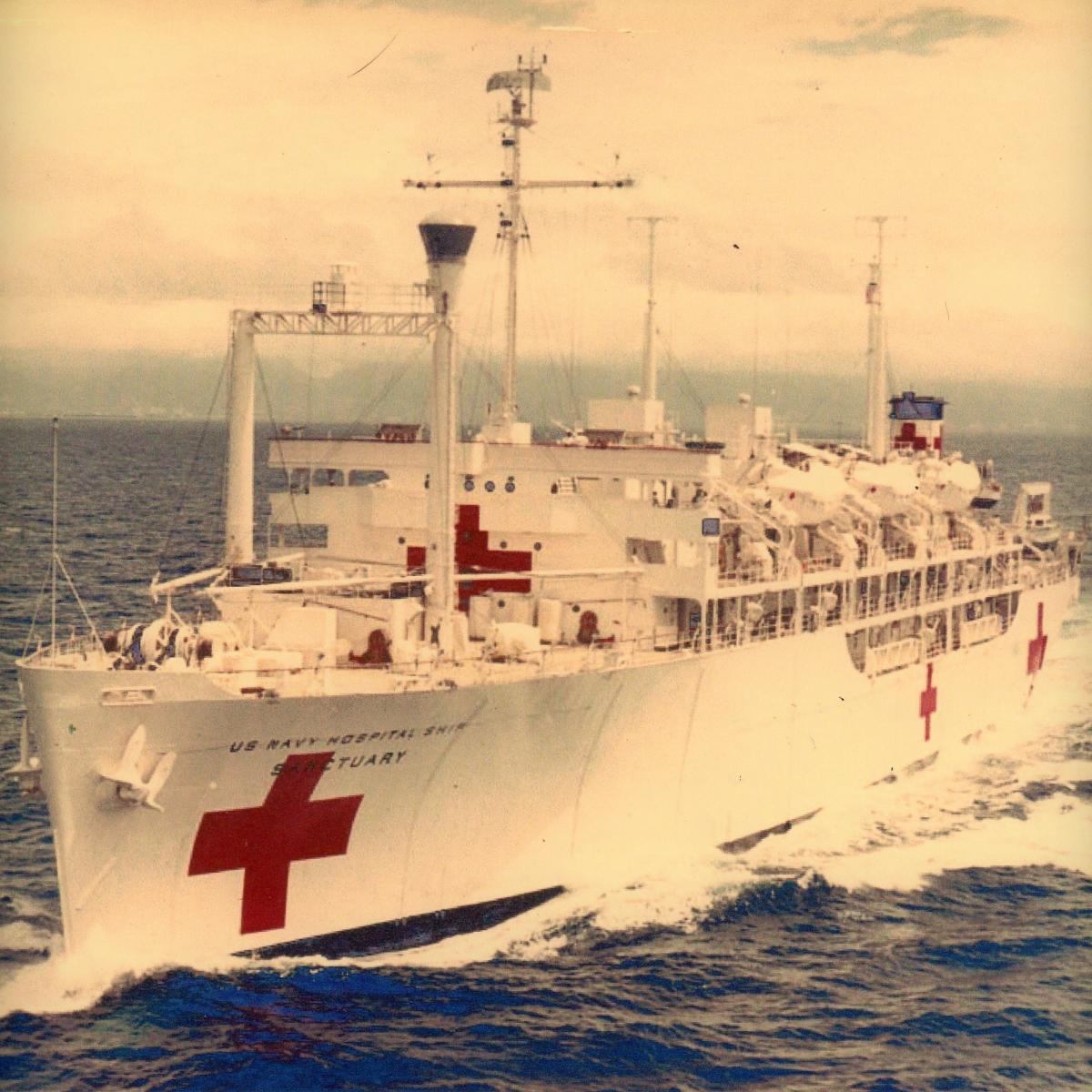 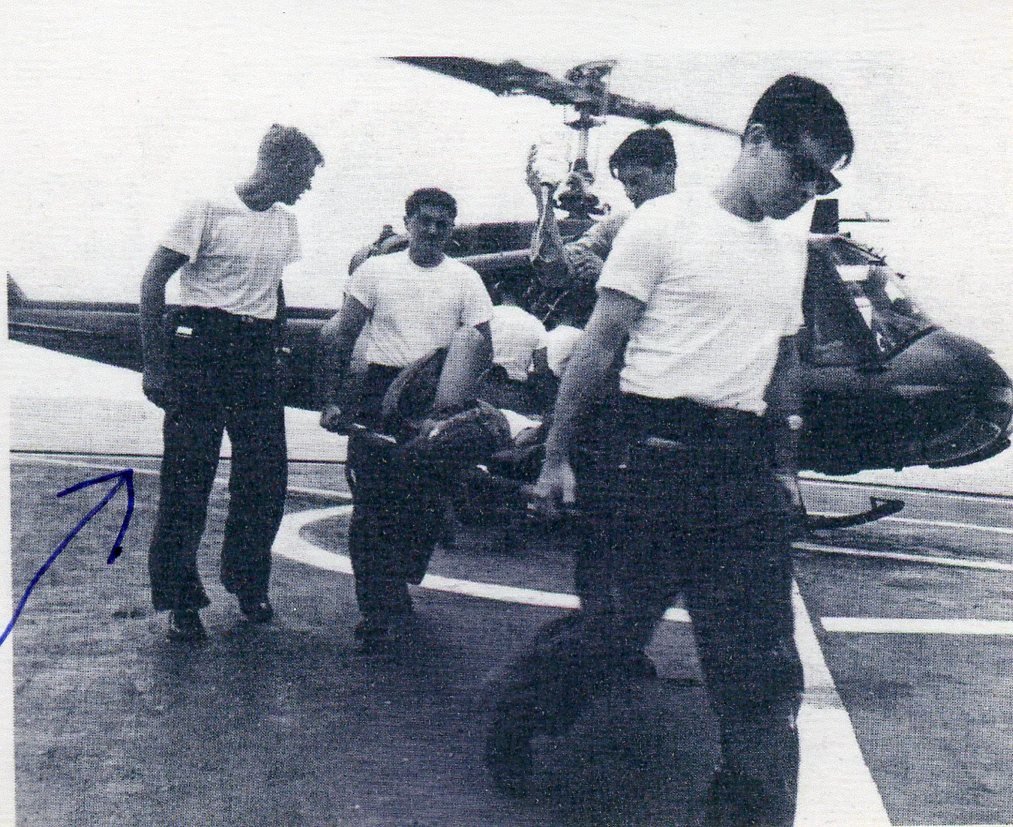 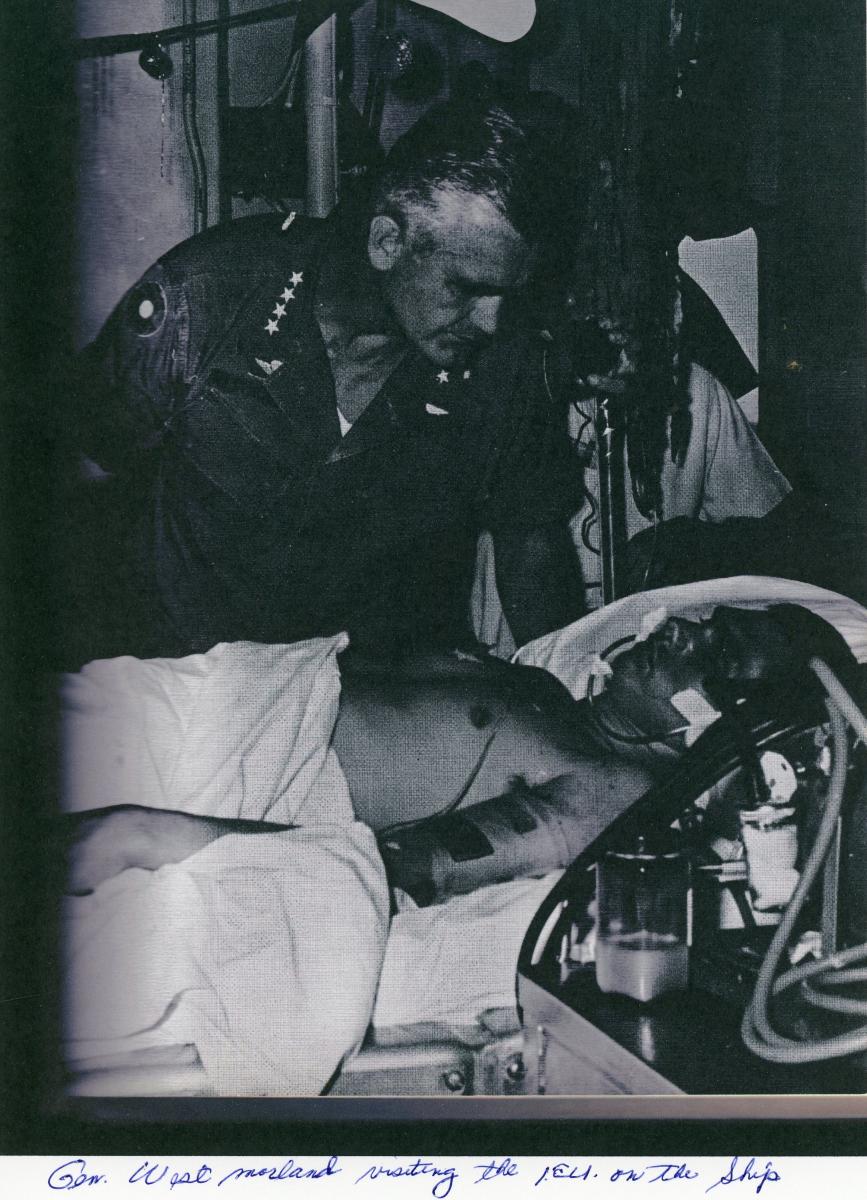 Gen. Westmoreland visiting the ICU on the Hospital Ship.

I’ve seen him each Sunday since, and each Sunday he’s wearing that boutonniere, dressed very well.

This day, Memorial Day 2014, at 9:30 a.m. at the Vietnam Memorial on the State Capitol Grounds, I may see Roger, who I invited to the annual Vets for Peace Memorial Day observance. Each year this observance grows in numbers of participants. It is always impressive. Whether or not he chooses to come, I’ll dedicate the day to him.

I’ll also bring to the observance two new friends from Pakistan, Humphrey/Fulbright Fellows in the University of Minnesota Human and Civil Rights Center, sponsored by the U.S. Department of State. I have been assisting them in identifying Americans to interview on the topic of Peace. The interviews, their stories, and their perceptions of America both from at-home and here are most interesting, and perhaps a topic for a later post.

But these are tense times in the issue of care of the desperately wounded coming home from combat oversees, particularly Iraq and Afghanistan veterans.

This evening 60 Minutes had a powerful segment on PTSD programs. You can watch it here.

There is a great deal of political controversy, lately, about the Veterans Administration Hospitals. My Grandfather Bernard died in a VA Hospital in 1957; so did my physically and psychologically disabled Brother-in-Law, who I spent time with at three different VA hospitals during assorted confinements. A VA Nurse I know is an outspoken advocate for better funding of health care in the system. Etc.

Still, the entire system, especially the Director, former Army Chief of Staff Eric Shinseki, and, of course, the President of the United States, is under attack as this Memorial Day dawns because of assorted outrages at a number of VA Hospitals in that immense system. Rather than fix the problems, the political strategy is to demand that the top guy be fired, and blame the President (and Democrats) and reap political points in the process.

If you’re interested (I hope you are) a long post on the topic I would urge you to read is here. There is a short comment of my own at the end.

I close with this personal comment: we are a nation that seems to revere war, when war has never and will never solve anything; and it is war that will ultimately kill us all. We have created and continue to refine the monster that can kill us all.

What I look for is the day when we can celebrate the death of war: now that will be a cause for celebration!

But it will take our individual work to end our national obsession with it, and to reduce the numbers of our fellow citizens killed or mortally and permanently wounded by it.

Let us make Memorial Day a day to celebrate Peace.

* – POSTNOTE: My barber, a retired man, is a Marine veteran of Vietnam. His brother died at 18 there; his name is on the Wall in DC and Minnesota. In Vietnam my barber was one of those who went into the tunnel system constructed by the enemy – he was willing and had the build for it. This was in the 1960s.

Tom and I talk a lot while I’m in his barber chair, and in recent years he’s talked about claustrophobia as a fairly recent and disabling issue for him. It sounds odd, coming from him, a former tunnel rat, but it is truly a problem for him, and he receives treatment from the VA for it.

War, it turns out, never ends.