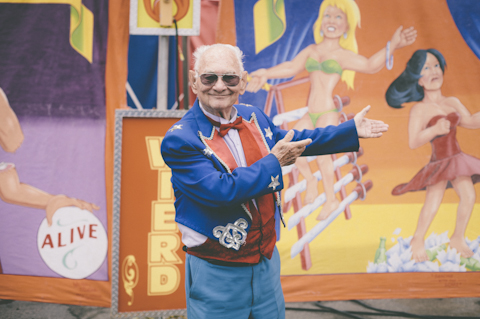 Covering the Minnesota State Fair is a hidden gem for journalists. There are countless stories to discover and 2012 was memorable because of the new food choices and the return of the sideshow.

The 2012 State Fair press release included the premier of “Lamb Fries.” I naively thought the fries were made from lamb meat—until I did a web search and Chevy Chase in the movie Funny Farm was the first to pop up. If Chevy Chase is involved with lamb fries, it must be good. Little did I know, as Chase learns after eating 31 of the nuggets, that the fries come from a lamb’s “undercarriage.”

Since I have family members and friends who are vegetarians and vegans, I always try to point out those choices when I write about State Fair food. A few of my vegetarian acquaintances eat fish, so I included the new food item Classic Walleye Roll as a “great vegetarian choice.” Readers quickly pointed out my error, and I admit I should have gone farther than my inner circle for vegetarian research. However, my life-long vegetarian friend, Jodi Inlow, said vegetarians who eat fish are called “pescatarians” and they eat fish, but no other meat. In other words, a semi-vegetarian.

My other memorable 2012 State Fair story was the return of the sideshow to the Midway. I had grown up with human oddity displays at the State Fair, but the show had been absent from the Fair for a number of years. When I found out the traditional sideshow was back, I arranged an interview with World of Wonders‘ 83-year-old owner, Ward Hall. Hall was a delight and educated me about the dignity of carny performers. I came away from my Palace of Illusions story with new admiration for the life of a carny. But they work hard, oftentimes non-stop during a Fair gig, so I don’t think I am ready to run away with the circus just yet. Photographer Jeff Rutherford captured the life of the sideshow performer in spectacular fashion.