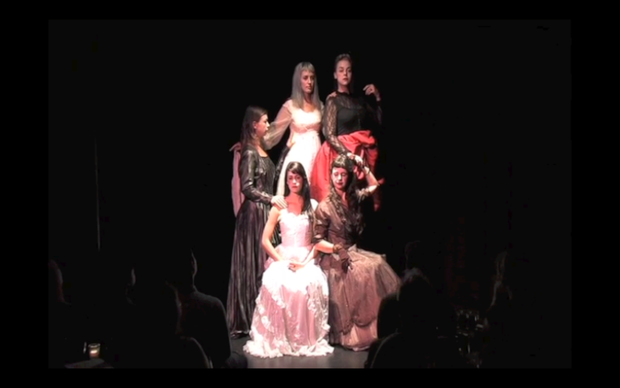 Last May when I covered Bedlam’s Tenfest, I was most mesmerized by the piece by Melissa Birch that involved linen and white-cotton-clad movers–dancers/characters who connected and climbed over each other and implied inequality, power games, gender games. They functioned like moving pieces of a puzzle that would come together to make a statement–only to disperse again and start the next collection of pieces that would re-converge and show you a new puzzle and statement.

Melissa Birch’s work has a mesmerizing and visceral quality. Movement and words create phrases, statements and ideas implicitly. Since her first performance at the Walker in 1993, Birch’s pieces have been performed all over the world–most recently in Berlin. Flying Nuns is a collection of shorter pieces dating back to 2009. The part she used from Bedlam is recognizable, but the story and the tension to their interaction was very different. The characters are all women, ostensibly nuns based on the title, although there is very little in the gaudy prom dress costumes that feel like they are nuns. They face off physically–writhing, confronting and loving. Nuns, whores, window displays–the women are battling with themselves and going from window, to behind the curtain, to the group portrait pose.

Since December Birch has researched “interactional synchrony, Catholic ritual, Second-wave feminism, 19th century, Dr. Seuss, vaginal pulse amplitude, metadata, and more.” The Flying Nuns‘s Kickstarter page describes the show thusly: “Positing the performance in the subconscious schism, after nature, before nurture, director Melissa Birch inquires into contemporary tensions between biology and status quo, where stimulation and social order stand in for trickier spiritual dilemmas.” But really, it is a lot simpler:  Melissa takes ideas and embodies them in movement. The intellectual descriptions might intimidate or irritate, but in the end this work is deeply moving and beautiful and worth whatever it takes to process it.