Not a moment too soon in this frigid winter, Megabus www.megabus.com is moving its Twin Cities stop from the Midway Center parking lot to the Union Depot in downtown St. Paul. The low-cost intercity bus company with service to Madison, Milwaukee and Chicago will make the switch on Wednesday, Jan. 29.

The Union Depot, www.uniondepot.org which fell largely into disuse for decades after Amtrak’s takeover of passenger rail service in the early 1970s, has been lavishly remodeled as a multimodal transportation hub. Amtrak is expected to move Empire Builder passenger service there from the Midway within a few weeks. Eight local bus lines stop at depot and it will be the eastern terminal of the Green Line light rail, which launches June 14. 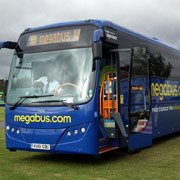 Gathering so many different transportation options in a central location enhances the network utility of the whole system of roads, transit and intercity connections. Minneapolis will get a similar hub as the Target Field Interchange is developed.