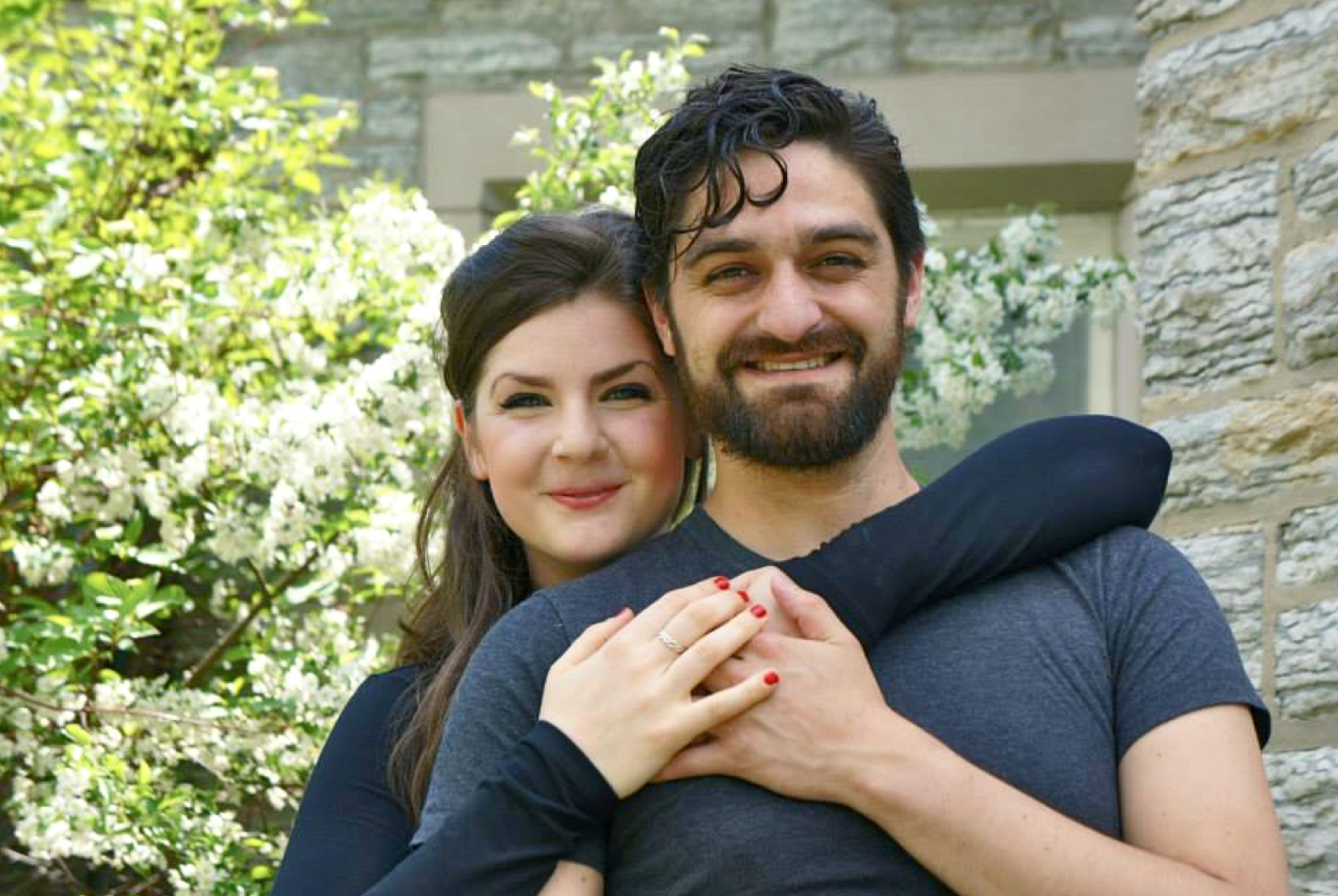 Teresa Maria Doran and Jason Rojas star in the Public Theater of Minnesota production of MacBeth, directed by Mark Hauk.  Photo courtesy of PT of MN.

Sunday evening I threaded through the buzzy, sidewalk tables of McCoy’s Restaurant in St. Louis Park’s nifty “new town in town,” Excelsior & Grand. I was on my way to re-discover Shakespeare’s Macbeth in nearby Wolfe Park’s open-air amphitheater. Set on a slope that levels into a great lawn with a lagoon and a stand of towering cottonwoods, the venue has been home to the Public Theater of Minnesota for four years.

I was there because a few days earlier I desperately needed an afternoon break from my Eden Prairie environs where I live, work and fight writer’s block. Without a solid escape plan, I ended up in Wolfe Park ambling through its amphitheater. I see what I assume are techies preparing light racks and a sound system for, say, a polka band concert – something summery. Twenty yards beyond, a platoon of women are engaged in what I take to be yoga exercises and a tall, handsome chap, with eyes fixed on some spiritual horizon, begins to loudly moan. As the moan intensifies, it segues into a resonant, masculine chant combining the ululations of Bedouin women, the sustained choral lines of Gregorian monks and some Bruce Springsteen whelps.

I circle around the park and return to the amphitheater where a gorgeous young woman upholstered in a white blouse and a dark sheath skirt, flashes a broad smile at me and says “Hi.” She walks onto the stage area to join others who are costumed like extras in one of Stallone’s commando flicks.

Interesting. I park myself on a wall that forms one of the amphitheater’s grass terraces. Actors, not musicians, are rehearsing. A director, stage manager and techies scramble about and consult with one another. I’ve entered a familiar and enjoyable comfort zone – a smaller mirror image of the Delacourt Theater in Manhattan’s Central Park; that’s where the Public Theater of New York stages its free, open-air productions of Shakespeare and where I would hang to do nothing more than watch the rehearsals and off stage business.

As a knife fight is blocked on the St. Louis Park stage, I meet Michael Leirdahl and Susan Flint who turn out to be board members of the Public Theater of Minnesota. They tell me that I am watching their troop’s preparations for Macbeth. One of the combatants is actor Jason Rojas (Macbeth); the other is Ryan Colbert (Macduff) – the chanting ululator.  The friendly mystery woman in the sheath skirt walks to stage center for a sound check. She is Teresa Maria Doran (Lady Macbeth).

Too cool. On my impromptu, get-a-way-from-it-all trek to a neighboring ‘burb, Lady Macbeth flashes her pearly whites at me and Macduff haunts a Yoga class via an actor’s vocal exercises.

I learn from Leirdahl and Flint that this will be the Public’s last season in St. Louis Park. The company is moving to Silverwood Regional Park in St. Anthony early next year as it transitions into a yearlong production calendar. Silverwood is some distance from the flight patterns flown by jets heading to and from Twin Cities International Airport. Leirdahl tells me that the jet noise has been a problem for Wolfe Park audiences. None-the-less, our cheery and informed conversation and the strength of the players prompted me to return for last Sunday’s performance.

I found the Minnesota Public Theater’s abbreviated Macbeth to be audience friendly, effective and sometimes riveting. I am not blessed with an easy ear for Shakespeare’s poetry – I’ve yawned through Hamlet at the old Guthrie, but this production of a yarn about political ambition, prophecy, treachery and murder among Scottish nobility, gentry and warriors is a fast moving, entertaining current.

Jason Rojas and Teresa Maria Doran pump Macbeth and Lady Macbeth with virile fiber and volatile and controlled chemistry as their dark schemes are concocted, unfold and implode. They are charismatic performers. The entire cast is strong.

Ten of the actors play double roles with some cross-gender casting. Many of their characters have unfamiliar Scottish names, titles and relationships. They talk, scream, curse and kvetch mostly in iambic pentameter. I lost my way from time to time, but that added to my interest. The whole flowed clearly and believably – good direction and good acting from the entire youngish company.

Michael Fell plays one of the three witches and also a porter with a smartly etched comic sequence of insults and asides spun out at the Macbeths’ version of a McMansion. Fell, along with Clare Parme and Elisabeth Herb form a wickedly sexual (but Church Lady safe) trio of witches. Hags in a cave, they are not. As bloodied victims fall, these stylish hyenas arrive to caress and then vanish with the remains. Scenes revealing the inevitability of their prophecies are savored by the witchy trio from stage edge and shadow. They are lingering voyeurs of unfolding betrayal and guilt. The staging of their signature cauldron scene brims with frenzied chanting and choreography, atmospheric audio and lighting. The cauldron orgy dramatically merges with the dimming twilight sky and the darkening, ominous walls of trees beyond. Mother Nature’s evening mood swing became an extension of the flood lit circle of The Public Theater’s stagecraft.

In Act II of its version of Macbeth, there is a dining hall scene in which the ghost of Banquo (Shelby Richardson) haunts Macbeth. Banquo had been Macbeth’s military colleague and a possible rival for the Scottish crown. Macbeth had had Banquo murdered by two henchmen. My eye followed the ghost as it left the performance area. Without breaking character, Miss Richardson walked westward 400 some feet through the darkening park before disappearing into the black silhouette formed by the cottonwoods. Writer’s aside: Miss Richardson, I may have been the only one tracking your hike, but well done and effective.

Five or six passenger jets soared high overhead to the north during last Sunday’s performance; earning sympathy for the Public Theater’s move to a quieter venue as well as for St. Louis Park’s loss. But the jet roar that washed over Wolfe Park’s amphitheater after Macbeth reacts to Lady Macbeth’s death, seemed purposely cued to the music that sound designer Cody Bursch has composed to underscore the mad helplessness of Macbeth.

Spoiler Alert: The good guys in this Shakespeare tale actually win. But the bad guys, the Macbeths, actors Rojas and Doran, spark a swelling of applause during their turn for bows. As the thesps move off stage, the two dash up to one of the amphitheater’s exits. They begin thanking each audience member, including myself. Lady Macbeth and I again exchange smiles. Macbeth and I finally shake hands. Jason Rojas and Teresa Maria Doran had delivered the goods, were exhausted but pumped with adrenaline. “Well done you guys. Very well done,” I say. “I very much enjoyed the performance. I bet you’re gonna toss back some cold beers after this.” They smile again. I dissapear back to Eden Prairie.

Macbeth runs on Fridays, Saturdays and Sundays at 8 p.m. through July 27th at the amphitheater in St. Louis Park’s Wolfe Park. Admission is free. Click here for more information at the Public Theater of Minnesota’s website.