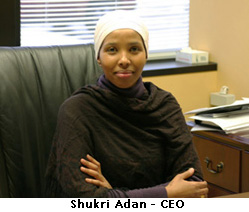 Last spring, a woman, probably just shy of her sixtieth birthday, came into a Minneapolis clinic looking for low-cost health care.  She wore a headscarf, a flowing skirt and used two canes to walk. Around the grip of one cane she clasped a zip-lock with her medications. As she hobbled, the colorful pill bottles jounced like candy in a trick-or-treat bag.

An orthopedic specialist had recommended a knee replacement. Medical assistance was set to pay.  Her family thought she should.  But she’d come to ask Dr. Abdirahman Mohamed first. Everyone in her community respected him. She’d waited months for this appointment.

Dr. Mohamed suspected a Vitamin D deficiency.  It causes weakness and joint pain.  Immigrants from sunny climes tend to be susceptible.  Wearing a headscarf blocks the meager Minnesota winter sun and Vitamin D comes in sun.  The woman left with samples of the supplement and instructions she understood: take one each day before her morning prayers.  She returned for her follow-up some months later – without the canes or the bag of pills.

Tired of the health care debate? Does the mention of mandates, GAMC, public options, death panels and tea bags makes you feel like plugging your ears and repeating blah, blah, blah?  You are not alone.

Fortunately, on medical care’s frontlines some have stayed focused on doing what needs to be done – helping people be healthy – no matter their financial circumstances.  In Minnesota, community primary care clinics such as Axis Medical Center play an important role in medically underserved communities.

Equidistant between Hennepin County Medical Center and Abbot Northwestern Hospital and not far from the University of Minnesota medical complex, it’s hard to imagine that Axis Medical Center is in a medically underserved area. But in terms of affordable primary care, the area is underserved.

Axis CEO Shukri Adan told me the story of the woman and the canes to illustrate the clinic’s mission and the payoffs.  Adan gave me a tour of her clinic, a rented space in a modest building at 1801 Nicollet Avenue, on the edge of downtown Minneapolis.  In the waiting room, signs in unfamiliar alphabets welcome patients.  Community college interns help staff the lab.  Samples stock the pharmacy. Care is taken for each dollar, said Adan.  They stretched their finances to acquire an X-ray machine, because X-rays are critical in tuberculosis treatment.  Increasingly, X-ray centers are closed to sufferers of the contagious disease.

As the political dust settles, and the outlines of health reform emerge, it’s clear that a fundamental trade-off is still being weighed – dollars for prevention now or acute care later.  The most basic question still awaits an answer. Who will care for people who can’t pay? Places like Axis Medical Center answer those questions every day.

The non-profit clinic provides primary health services to people with any type of insurance or none at all.  Fully 96 percent of Axis patients are on medical assistance.  That compares with around five percent of Medicaid patients at the average Twin Cities family practice clinic.

“You can’t blame them,” said Axis Clinic Executive Director Stephen Rondestvedt of his for-profit clinic counterparts. “Unless you have a significant amount of private funding, or hit the jackpot with a grant, you can’t do this. The Medicaid reimbursements are simply not enough to pay the bills. You might bill Medicaid 20 minutes.  Your reimbursement might be $28.”

Axis makes ends meet by cutting all non-medical expenses to the bone, said Rondestyedt. Though they pay their practitioners well and allocate necessary funds to supplies and operating costs, their administrators take only a nominal salary.  They spend zero on marketing.  Still, while it costs Axis around $105 for the average patient visit, only about $75 per visit is reimbursed.  At 40 to 45 patients per day, that’s a shortfall to be reckoned with.

Culturally attuned primary care saves both suffering and tax dollars. The economics work out pretty good for society at large.

“An ear ache, for example,” Rondestvedt says, “the entire visit might cost $60 to $80. If someone goes to the emergency room because my clinic doesn’t exist, it might cost the taxpayer $800 to $1000.”

How do they do it? Axis hasn’t hit the grants jackpot yet, however, they recently moved a step closer to designation as a Federally Qualified Health Clinic (FQHC).  That may make things a little easier: malpractice insurance, eligibility for stimulus money and a shift to a more favorable per patient reimbursement structure.

Loans make up the slack, many from Universal Home Health. This successful home care provider shares a management team with Axis Medical Center. Mustafa Mussa and Shukri Adan, both with roots in Somalia, started Universal Home Health in 2003.  Experience convinced them that medical non-compliance and cultural misunderstandings were sending far too many Somali patients to the hospital.

Axis Medical Center was founded in May 2008. Dr. Mohamed became chief of staff a few months later, bringing expertise he’d gleaned in Africa, first as a senior advisor to USAID and later as director of Zambia’s malaria prevention program for the Bill and Melinda Gates Foundation.  In Minneapolis, he felt, he might do some good.

There’s no perfect answer to the health care question, but Axis is in there pitching.  From the front door of the clinic you get a great view of the Minneapolis skyline, built on the miracles of profit-driven medicine.  On the margin of that world, at clinics like Axis, a different economic trade-off prevails.  If the goal is to keep all people healthier and spend less to do it, then the experience at Axis Medical Center is worth considering.