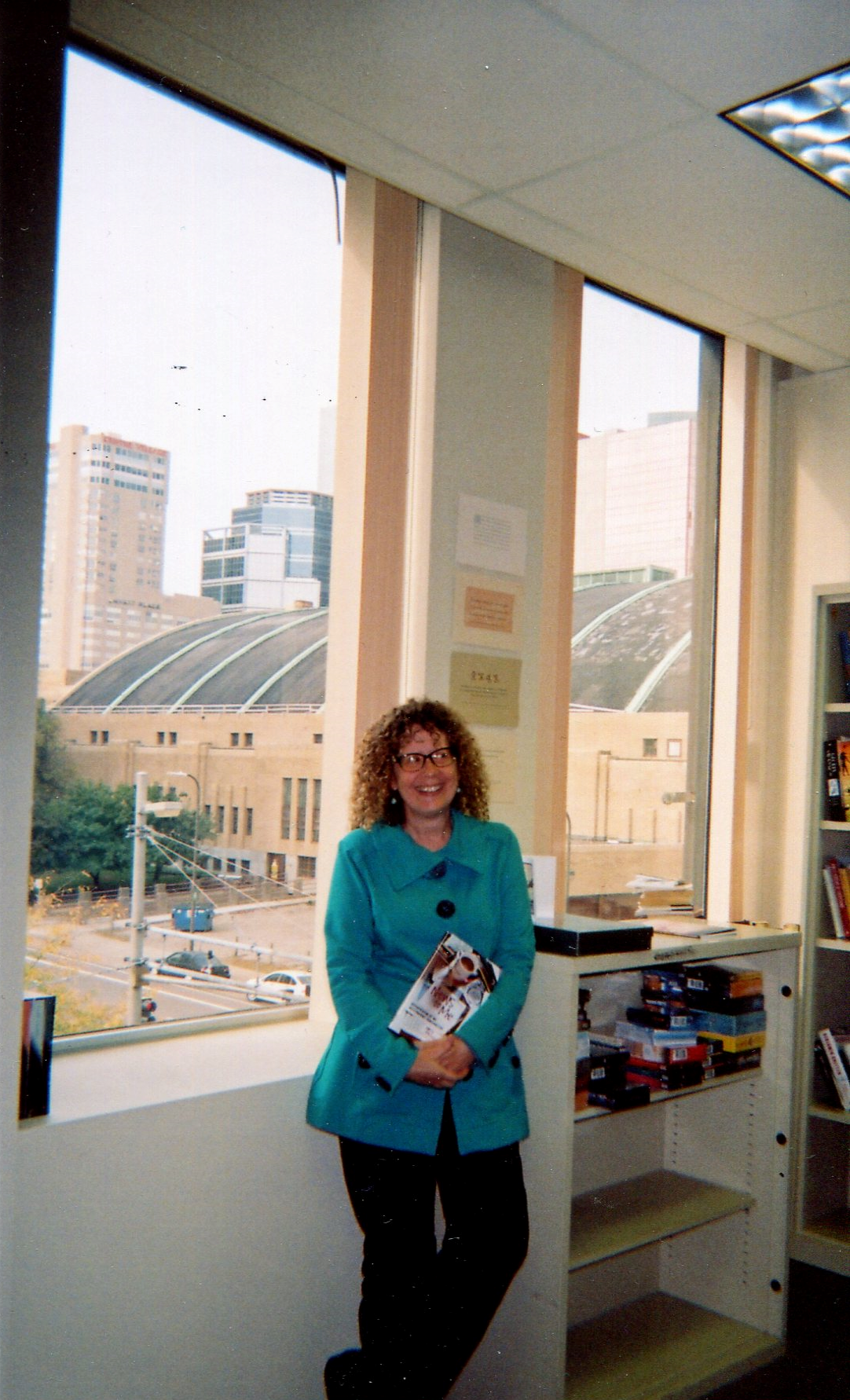 Laurie Hertzel is as thin and wiry as the coils of blonde hair that sprout from her head in every direction.  At 57, she has been a newspaper woman for three and half decades.  Her career started when she was twelve years old.  “I wrote about the family.  Headlines heralded the moment such as, ‘My aunt had her birthday today.’ Newspaper was ten cents.  Collection was hard! Finally, I just gave them away, and,” with a deadpan expression Hertzel adds, “46 years later, the newspaper business still doesn’t pay well.”

“My first job was at the Duluth News-Tribune.” Hertzel, now the senior book editor at the Minneapolis Star Tribune, adds, “In my early years with them, I could count the number of women who worked there on two hands—even if one hand was missing a couple of fingers.  The editors, reporters, photographers, and printers were by and large men.”  Hertzel says, “Women reporters like Sue Willoughby, Suzanne Perry, Ruth Hammond, Jacqui ‘Bananas’ Banaszynski opened the door for women.  They taught me about writing solid news stories.”

“Journalism is not for wimps,” Hertzel says.  “Our Trib guys on the crime beat go into dangerous situations.  Just a few years ago, rioters attacked our reporters believing the reporters were with the police because they had cameras and microphones.  Two were seriously hurt and had to be hospitalized.”

Hertzel waves her hand past all the shelves and says, “This area is called the book room for obvious reasons. We receive about 1,000 books per month.”  Stacks rise to the twelve foot ceiling with the month they come in posted at the top of each column.  “One of my first paid positions was sorting books in a library during the summer months—boring.”   She no longer catalogs.  Now, she winnows the few that will receive careful attention in the book section of the newspaper.

Staring at a wall of books, Hertzel mentions briefly she used to write more of the reviews, but no longer has the time.  With several published weekly, the book department is often on overdrive.  Most of the books are now assigned to other reviewers.  Hertzel sits up straight, reserved, slightly gesturing with her hand and discusses a talk she attended between Jhumpa Lahiri and Louise Erdrich; reminiscing about them and other leaders of the literary world she has met over the years.

In addition to managing all the reviews at the Trib, Hertzel writes profiles of authors and editors and reports trends in the book business, posting to social media sites as well.  She recently tweeted, “Hurricanes, Nazi hunters, horses & romance… 30 years of Kevin Kling this Sunday.”

Thomas Smith, a local poet, has only praise. “Laurie blogged for Robert Bly recently at one of his final poetry readings.  She has maintained an intimate involvement with the regional literary scene, unfailingly supporting the local writing community.”

Hertzel feels her position as senior book editor is almost perfect.  “I love my job, though I get frustrated because I don’t have enough time or space to do everything I want to.  I have to let so many worthy books slide, with no mention.  Last year, two Minnesota authors won National Book Awards!   This year there were three on the National Book Award long list.

Hertzel says, “I do try to make sure there’s a lively mix of reviews; fiction and nonfiction, from quirky and excellent small presses as well as large ones, male and female authors, those with diverse backgrounds.”  She modestly explains she is not an island on to herself.  She often accepts recommendations for book reviews from critics she trusts, and gets those books assigned to reviewers right away.

Hertzel emphasizes, “Importantly, I want to remind readers that books are not for literary snobs. Books are for everyone.  There are as many different kinds as there are writers. If they don’t like one, hopefully they’ll like another.”

“Laurie is an accomplished author in her own right,” Kate Parry, assistant managing editor at the Trib says.  “Beyond the rich book pages she produces for the newspaper, she is out at readings and book events in the evenings and on weekends–constantly.  Laurie distills that avalanche of books we receive into the carefully selected reviews and features you see on our pages.”

Hertzel remembers her early years at the Star Tribune.  “I was one of the editors on an investigative project about priests from St. John’s Abbey being prosecuted for sexual abuse of children (Louwagie, Pam. “Behind the Pine Curtain.” Minneapolis Star Tribune. September 29, 2002.)  Pam Louwagie and Paul McEnroe, our Trib reporters for the project, wrote about a member of the clergy, since dead, who abused the youngest of three brothers. This child used to run and hide in the barn whenever he heard the priest’s car pull into their yard.  Their parents would always go find him and make him come out and be nice to the Father.  The boy had talked to the press a few years before, and had allowed his name and image to be used.  He told us we could use his name and photo as well. We had a very striking image of the priest posing with all three brothers.

And then, at the last minute (we had been working on this package of stories for months,) the boy (now an adult) called and said he did not want his name used, or his photo.  I mean, we were at the layout stage!

It was a dilemma. He had agreed to go on record, he sat for numerous interviews, he went on the record in the past, and now at the last minute he wanted to be anonymous.  What to do?  The rules of journalism were on our side; when someone goes on the record, they cannot suddenly change their mind. And he had been on the record in the past.  But on the other hand, he was not a public figure—a politician, or a celebrity; he was not someone who had been convicted of a crime. He was a victim—of sexual assault.

In the end, we decided to honor his request. We deleted his first name and used the family name. Then, we published the photo of the priest and the two brothers, with the youngest cropped out.

That decision came after discussion and knowing full well that we were within our journalistic rights to use his name and image.  We wanted to do what we thought was right, not what we had the right to do!”

Hertzel has that ‘gotcha look.’  She has revealed an ethical dilemma in which she has not breached any ethics; in fact, all have won once the dilemma has been resolved; the boy is allowed his privacy, yet the truth of the abuse is revealed, and the article is published.  And blasted, that is what is so likeable about her.  Hertzel is charming and transparently kind.   She says, “Yes, you’ll be glad to know ethics won,” as Hertzel’s hair bobs adding, “Yay, yay, yay, ethics won out.”

She explains how the decision was made.  “I was the enterprise editor at the time.  My job was to work with reporters across the room on the bigger take-outs, not the daily spot news.  “Behind the Pine Curtain,” was one of those larger stories.  Chris Ison was the project editor.   He was responsible for the progress and final presentation of the article.  We sat down together and listed all the reasons why we should go with the story and reasons why we should delete this particular victim out of it.  In the end, it was decided, the victim had suffered enough at the hands of the perpetrator.”

Hertzel looks out the window, then returns to the topic of ethics.  “When I was at the Duluth News-Tribune, a staff member was fired because she ran for a political office, and she felt unfairly, because she only covered social events.  The editor said reporters were there to cover government, not be government. And, it would taint the reputation of the newspaper that worked hard to maintain objectivity.  As a reporter, I can’t have political signs on my lawn, campaign for a candidate, or indicate political preferences publicly.”

“Also,” she adds, “it’s important to be honest, accurate, and tell the full story. If you think you have a dog in the fight, tell your editor. Never write with an agenda other than the truth.  Own up. Correct mistakes. Apologize for hurt.”

“When I think back to days of scanner paper and old guys in fedoras, it is with great fondness and enormous gratitude.”

CORRECTIONS November 25, 2013: The article originally implied that James McBride, who won the National Book Award for The Good Lord Bird this November is a Minnesotan. That is not accurate. Thanks to Laurie Hertzel for clarifying some additional details.