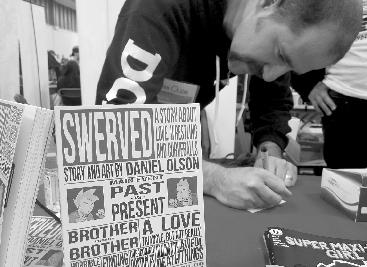 The story is drawn in simple black-and-white panels. They run cinematically through the main character Neil Wilson’s life. A faraway glance at the outside of a church or a restaurant gives you the place. Wordlessly, the characters glance at one another. Silence says more. One of the more spectacularly drawn pages occurs with older Neil and his former love interest Julie. They meet after many years and when they realize they have so much to discuss, they drive on the snowy, Minneapolitan highways. A dark two-page spread follows: the city’s skyscrapers loom in the night. Spaghetti-like turns of wintry roads loop and wind. There is Neil, old and more husky, looking upwards, helpless. There is Neil, young, looking downtrodden, for guidance.

Daniel Olson has worked on comics, ever since he found the X-Men spin-off series New Mutants as a kid. But he’s had to jump hoops on his way to the profession. He had to graduate from art school in Minneapolis then move away. He had to move back to Minnesota, work fulltime at Shinders, go to school fulltime, and live at home with his parents. He had to move to be with his wife while she attended graduate school in Arizona. He had to work at Enterprise, wearing a suit while washing cars, starting on amateurish comics and publishing them online, removing them shortly after.

Then they moved back to Minnesota. Then there was Super Maxi-Pad Girl, a self-published booklet about an anthropomorphic feminine product that fights a certain villain every 28 days. Five runs of that story, till menstruation jokes are exhausted.

He has an epileptic seizure, finds that he has epilepsy. He throws more storylines at his wife. He can’t thank her enough. His kid is born, he gets a house, a mortgage, a full-time job in sales and marketing. Another kid is now on the way, and he keeps moving ahead.

Most nights, when his kid is put to bed after 8, if there’s nothing else to do, he hightails it to the studio to work. He labors above Diamonds Coffee Shoppe, renting a space at Big Time Attic, with comic artists Zander Cannon and Kevin Cannon. He goes till midnight or 1:00 a.m.

“I’m epileptic. I should be getting more sleep, right?” he says. “I do that on the weekends!”

It’s appropriate that the wrestling ring is mainstage in his new self-published graphic novel, Swerved. While Olson’s not in the business of wrestling, he’s certainly entwined with it. He knows the signature moves, the lingo, the faces and the heels. Wearing a winter beanie and a handlebar mustache, he will talk excitedly about hanging with his friend, a former Total Nonstop Action Wrestling champion, or suddenly meeting SpiderBaby (a Twin Cities wrestler who happens to be a Scooby Doo comics writer) at one of the many comic conventions he attends.

And for his book’s story, which is about making ideals into reality, having reality crush ideals, a self-determined, conscientious life outside wrestling can be all you need.

He’s worked on Swerved since late 2007. Too long of a time, he says, with too many stops and starts. “I’m the most inconsistent cartoonist on the planet, I think.”

What work are you willing to put in? The main character in Swerved, Neil Wilson, returns to his hometown after many years of a failed career and alcoholism. Two stories emerge and run parallel: the teenager organizing a wrestling match, the older returning to a high school reunion, wrestling with his past and present.

The wrestling match is organized and Neil finds his feet late in life, but both don’t happen the way you think. Loss lingers. There are mis-timed opportunities for love and misplaced trust runs rampant. There is cancer and death. It seems like it’s all a slow march. But while some people do harm, there are also people who stick around. Sure, you get sidetracked. That’s what Swerved means in wrestling terms: a 180-degree turn. The unexpected occurs and you get slammed. But then you get up. You be there for others.

Olson realized long ago, as he picked up Craig Thompson’s graphic novel Goodbye, Chunky Rice and a book by John Porcellino, that comics could be much more than just superheroes.

“It wasn’t your hero and your villain and your plot and your plot device and your hero always wins,” he says. “This is real life. These characters don’t have superpowers. They have a relationship. That’s how the stories were working… My eyes opened up.”

Swerved is on a limited print-run of 50 copies. I was given the 47th and was quickly sucked through. It is strongly told and it is drawn with great empathy.

Olson is looking for a publisher to take on the novel, because with all his other responsibilities, he doesn’t have the time or desire to call book stores around the nation or set up distribution.

Given the chance and some wealth, he’d write comics full-time. But really, it’s about more than that. He’s 35 years old and has a loving family. Through every stop and start, he is still able to do what pleases him most: make comics.