The Monitor, which covers Saint Paul’s Midway and Como neighborhoods, has three stories this week about what’s going on in the neighborhood. Some good, some bad… 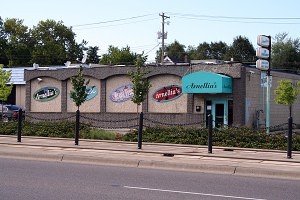 First, the good news. Arnellia’s Bar [pictured], the heart of Saint Paul’s African-American business community on University Avenue, is set to receive a grant and loan from the city as part of the annual STAR fund. They’ll use the money to build a patio and remodel.

Likewise, the Midway Murals project (profiled in the Daily Planet earlier this year) will debut at the end of the month. The project offers a unique collaboration between artists and business owners from this diverse part of Saint Paul. [Pictured at top.]

But elsewhere in the neighborhood, a long-standing Section 8 building for seniors right off Lake Como might lose its affordable housing status. Residents are doing what they can to organize, but chances seem slim:

Another asset at stake for residents is the strong community that’s developed within Como By The Lake. “Most people that moved in here moved in with the intention of staying here,” says longtime resident Shirley Williams “Home is where the heart is, and people’s hearts are here. People love each other here; it’s like a big family.” All the residents interviewed seemed to agree—there’s a sense of community and family that goes beyond other apartments.

The building is being sold.

Honesty in the media 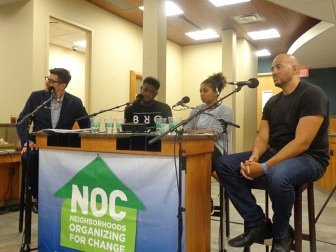 Charles Hallman has a pair of good articles in the Minnesota Spokesman-Recorder. The first is a story about Neighborhoods Organizing for Change (NOC) and their recent coverage with MPR about the one-year anniversary of Ferguson [pictured], part of the National Association of Black Journalists (NABJ) conference:

“We should not rely on people of color to tell the story,” stated Wanda Lloyd of Savannah State University. “It’s not just our job [as Black journalists], but everyone’s job.”

“I love having this conversation,” noted Weber after the MPR remote broadcasts. Whether taped for later or live, in community venues such as NOC, “I’d like to see it done more often.”

(I bet that NOC would take you up that offer, MPR!)

Hallman also pens a nice reflection piece on what the conference meant for Minneapolis. The conference sounds like it was a big hit.

Elsewhere in the paper, there’s a timely column by Larry Fitzgerald about the firing of Norwood Teague after sexual harassment charges, and what it means for athletics at the University of Minnesota. Here’s what Fitzgerald says:

I never endorsed the hiring of Teague from day one, particularly after his rush to judgement in firing then-basketball coach Tubby Smith following an NCAA tournament appearance and victory over UCLA three years ago. He hired Pitino to succeed Smith, but only after failing to secure a quality veteran head coach. Pitino is young; now in his third year as coach he has zero NCAA appearances, and last year the program floundered.

Best of the Rest: Intergenerational pre-school, Mondale, and more 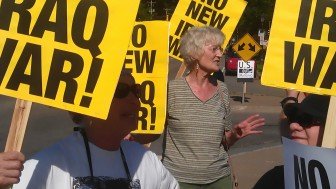 Southside Pride reports on a peace / anti-war vigil on Lake Street, which have been going on every Wednesday for over 15 years.

One of the organizers explained:

“The WAMM End War Committee has been committed to this vigil for these many years because we believe it is important to have an ongoing public witness against war. Though our numbers may be small at times, we gather on the bridge every Wednesday to remind ourselves and others that the United States is at war and that we must speak out against the atrocities that our country commits in the name of ‘our national security.’

Insight News reports on India Fest [pictured at top], an annual celebration of Indian culture that took place by the State Capitol on the 15th.

Elsewhere in the paper, a story about a speech on the legacy of the Voting Rights Act from former Vice President Walter Mondale. “There had been a long, dismal, pathetic history of denying Blacks and other minorities access to democracy,” Mondale said.

The Monitor reports from the recent “summer boat launch” [pictured at top] of the Urban Boatbuilders.

La Prensa de Minnesota pens an editorial about how the new $9 / hour minimum wage might help and hurt workers, and offers some advice

(Some tips: Keep it simple, take advantage of free meals, and cut back on internet and cable bills.)

Last but not least, read about a Northside childcare center called Olu’s Center in The Spokesman-Recorder. The center is specializes in intergenerational care, and is seeking preschool students.

“The young can obtain wisdom from the old, while the old regain a sense of purpose and direction,” [its leader] Ellis-Chapman said. “This is a situation which can benefit all.”