The importance, and the difficulty, of gaining a voice to tell one’s own story was the underlying theme of the annual Twin Cities Media Alliance Fall Forum Nov. 8. The forum’s keynote speaker, Nekima Levy-Pounds, expressed concern that minorities, especially African-American men, are portrayed in only one dimension in the local media, and are seldom the authors of their own narratives.

Levy-Pounds, Professor of law at St Thomas University, told the audience at the early November event that television, print and online news play a huge role in how people of color are seen, and that role is often not a benign one. She noted that most news stories about minority men describe either athletes or those in contact with the criminal justice system, and that “negative perceptions of young black men influence laws and policies.” She also stressed that “the African-American community in the Twin Cities is not monolithic, and we deserve to be heard in all our differences.”

Levy-Pounds referred to the recent KSTP story in which Minneapolis mayor Betsy Hodges was allegedly “flashing gang signs” during a videotaping of an encounter with a young man registering voters in North Minneapolis as an example of media-driven misconceptions. She called the story “appalling” and said it was “a false narrative about the Mayor and the young African American man standing beside her in the photo. For white Minnesotans who do not personally know any young African American men, it is all too easy to take the media’s word as absolute truth and embrace the negative racial stereotypes that are being perpetuated about the young man in the photo.” 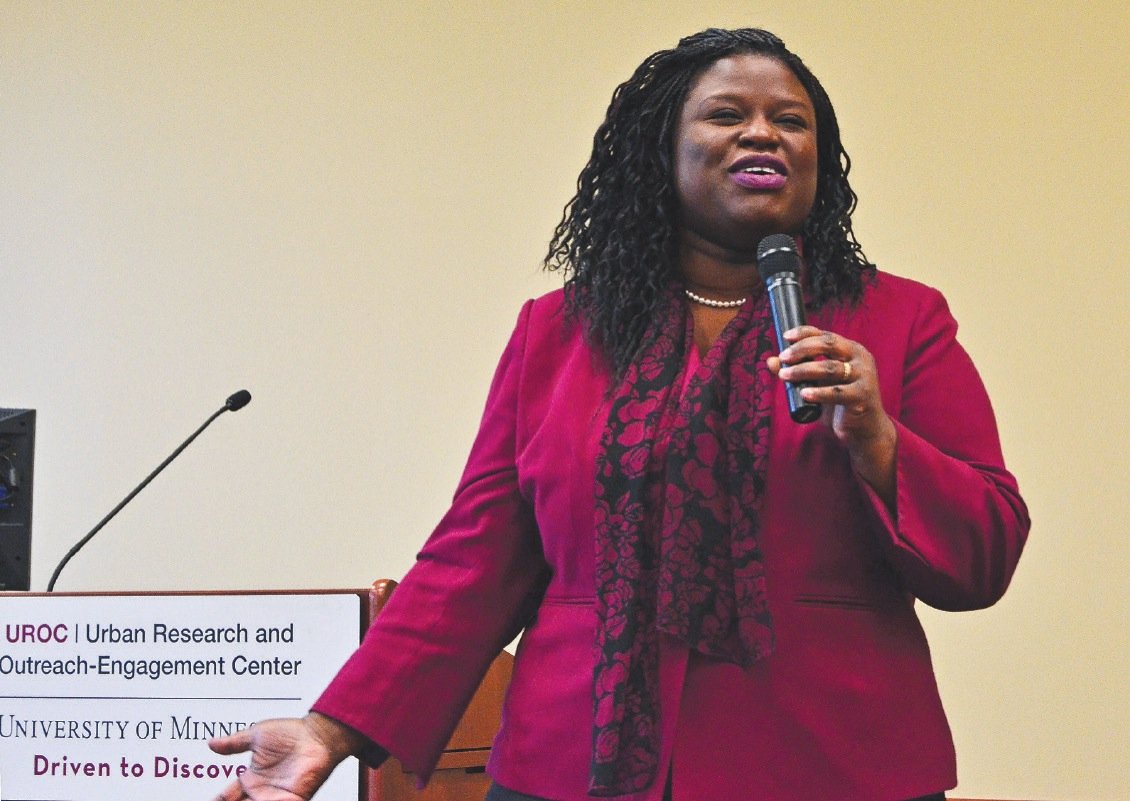 Levy-Pounds (right) told the audience that, referring to the traditional media, she “will not accept the dominant narrative,” and urged writers to work to make their own “narratives” available to the wider world. She also suggested they ask themselves “Have I asked for a perspective, and not just a quote?”

In addition to being a professor and an attorney, Ms. Levy-Pounds was a founding member of Black Advocates for Education, and is the director of the Community Justice Project, a civil rights legal clinic.

After Nekima Levy-Pounds spoke, there was a five member panel, and each member described her or his perspective on writing alternative narratives.

Cirien Saadeh, a TCMA board member, convened the meeting at the U of M Urban Research and Outreach-Engagement Center, 2001 Plymouth Ave., Minneapolis. She told the approximately 80 people attending: “It takes a village like TC Media Alliance and a platform like the TC Daily Planet to bring people together for this meeting’s theme of communicating for impact.”

Aida Al Kadi, a TC Daily Planet writing intern since last August, described writing her first story, about her mistreatment by the St. Paul Police after an arrest for an auto insurance infraction. She also talked about her immigrant parents’ difficulties with assimilation into the United States.

Shaina Brassard, Marketing & Communications Coordinator, West Broadway Business and Area Coalition and partner, One Minneapolis project) spoke about the success of the 9th annual FLOW North Side Arts Crawl (July 25 and 26). 200 North Side artists were involved, and over 5000 people attended. Brassard noted that “Northsiders have to tell their own stories, and art is one way to do it.”

In breakout sessions, John Capecci, Capecci Communications presented “Telling your story to Make a difference: Navigating the Space between Private and Public.” He advised: “The best communications are audience-centered.”

He asked people to think, “What are the qualities that make a good story? What is a well-told advocacy story? Has someone told you a story that caused you to act?”

He was a member of Northland Poster Cooperative (closed 2009); Art for Social Justice; Born in Puerto Rico. He advised:

“Don’t direct your message to where people are at now; direct it to what people hunger for.” Example: The Montgomery Bus Boycott did not happen spontaneously – activists knew “where to put the needle at the point of greatest pressure.”

“We live in a blizzard of lies – the cover stories are wearing thin. People are hungry for truth – We can no longer ignore what we have been ignoring, just to function. What is the drumbeat that we can synchronize ourselves to? We can’t comfortably exist with truth and lies.”