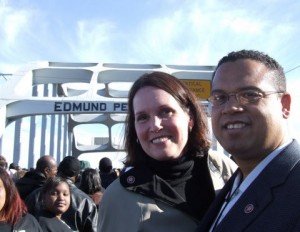 Reps. Betty McCollum and Keith Ellison are cosponsors of a resolution in the U.S. House that calls on states to ban conversion therapy for minors. The Stop Harming Our Kids Resolution was introduced by Rep. Jackie Speier, a Democrat from California. McCollum and Ellison are among 34 co-sponsors of the resolution.

The SHOK resolution states, in part:

It is the sense of Congress that sexual orientation and gender identity or expression change efforts directed at minors are discredited and ineffective, have no legitimate therapeutic purpose, and are dangerous and harmful.
Congress encourages each State to take steps to protect minors from efforts that promote or promise to change sexual orientation or gender identity or expression, based on the premise that homosexuality is a mental illness or developmental disorder that can or should be cured.

“It’s time to end this abusive quackery masquerading as medicine,” Speier said in statement. “Being transgender, gay, lesbian, or bisexual is not a disease to be cured or a mental illness that requires treatment. That view has been rejected as scientifically invalid by the American Psychiatric Association and many other mental health groups for nearly forty years.”

Speier said she is also pursuing the possibility of a full federal ban of the practice.

If you liked this article, please make a pledge to keep high-quality LGBT journalism going! Visit Give MN to make a donationtoday!
[Check out original article here: http://thecolu.mn/16552/mccollum-ellison-cosponsor-resolution-calling-for-end-to-conversion-therapy]