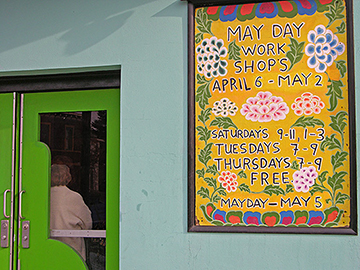 April 2013; and of the 30 Days of Biking, I have 11 dates already assigned with a biking destination. For me HOBT is a good draw, the most wonderful sights, a collection of the most interesting people, and a progression of meaningful content. I think of the old Our Gang hey-kids-let’s-put-on-a-show.

The public workshops of MayDay began last Saturday. During this April, each Tuesday and Thursday from 7-9pm and Saturdays 9-11am (mornings), and 1-3pm (afternoons), the gang gathers at In The heart of the Beast Theatre (HOBT.org) to get ready for MayDay. You are welcome to come and help make MayDay. There are parts to play in the MayDay Ceremony. You may parade down Bloomington during the Parade, or partake of the Festival on MayDay. The shy may just contribute you talents behind the scenes. You will easily fit in with this gang.

EDITOR’S NOTE: May Day dos not have city or state funding — and HOTB director Sandy Spieler is appealing for public support. “This year has me worried, though. As we crafted our theatre’s finances for 2013, our executive director Loren Niemi suggested we not “do MayDay” this year; our budget would not support it. …What? Not do MayDay?! After much discussion, our Board and staff agreed instead to do MayDay with a budget 33% less than previous years, while making a commitment to build a broader base of public fiscal support for this very public event.” To find out how you can help, click here. The Parade and the Ceremony have a theme and storyline each year. Community input and staff from In the Heart of the Beast Theatre construct a general “play”. That story is what makes MayDay, and you are invited to attend the creation. Come and get your hands in clay, and wet glue paper. See inspiring pieces everywhere, learn, teach, contribute, take away a vibe. Wear painting clothes. In the front foyer, you may listen to the tale of this year’s MayDay. Some part of the suggested Parade costuming or themes may resonate with you immediately, or you may envision your self in any number of flights of theatrical fantasy, especially when you see other’s projects. The more practical of us, relish the production techniques and illusions that transpire throughout the MayDay build. A synopsis (as I am understanding at this writing – Bread & Puppet from Glover, VT HALLELUJAH);
See The World
When you sow seeds on it
and when you pour water on it
and let the sun shine on it
it will grow
and the birds will feed on it
and the children will eat it
and the grandmas and the grandpas sing hallelujah Being that this is theater, liberties will be taken, as the order in the Parade and Ceremony will be different, and joyfulness will dominate over gloom. Think of the Drama! Come and be a player or maybe a musician. There are many parts and MayDay is built by our gang.