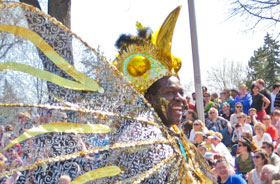 The MayDay parade that takes over Bloomington Avenue every year will do so once again for the 38th time in four scenes under the theme of “The End of the World as We Know It”: “Consider This,” “Break the Spell,””Make Do” and “Surround of Light.” And because it’s put on by In the Heart of the Beast Puppet and Mask Theatre, you can bet it won’t be your usual candy-throwing parade. Immediately following the parade is a ceremony (a 200-person and puppet retelling of the parade’s events) and festival (which includes music, dancing, food, and canoe rides) in Powderhorn Park. The parade, for a lot of Minneapolites, is a sign that winter is truly over; it’s a time to get out of the house and immerse yourself into the community. And what better time than now, especially with the Mayan calendar “predicting” the end of the world this year.