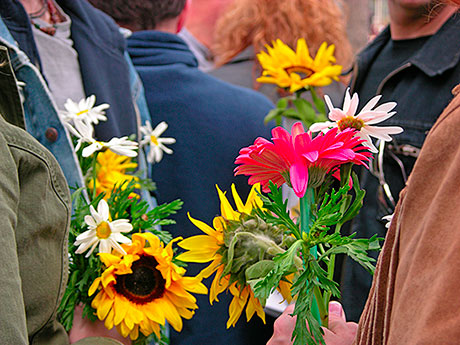 This is the final week before MayDay Parade, Ceremony, and Festival. Next Sunday, May 2nd, 2010, the areas around Powderhorn Park should be pulsating with vigorous good cheer as a community of souls parades down the streets or simply watch from the sides. All day long Powderhorn Park will resonate with celebration as the season of Spring reasserts itself in the South Minneapolis neighborhood and people express their will to have a better world.

The Parade will begin at 1 p.m. at the intersection of 26th Street East and Bloomington Avenue South. The creations that sprung from the community meetings, cardboard, paper, and paint will travel south on Bloomington Avenue to 34th Street East, turn west at that corner and then enter Powderhorn Park. In Powderhorn Park the parade ends and the MayDay Ceremony, at approximately 3pm, begins. MayDay Festival permeates the Park all day. The Park is in a residential neighborhood and so there is limited vehicle parking. For many years MayDay had been one of my first bike rides of the season. Powderhorn Park is approximately five blocks south of the Midtown Greenway right at the Midtown Exchange (Lake Street and 10th Ave So). You will discover a world of two wheeled transportation thriving around the MayDay festivities. Much of the puppetry framework is lashed together with bicycle inner tubes, and decorated bikes, both in and watching the parade, abound.

The Festival, Parade, and Ceremony offer spectacular opportunities for viewing, observing, and for listening to musical performances. It is still possible to join in the Parade, or as a support person. Strong individuals may help immensely in teams formed to carry some of the larger puppets. The less robust can still join, and enjoy, the Parade by toting lighter, prepared displays. 2009 sprout arks;- volunteers dressed in white, are needed to ferry the seedling arks on their voyage again this year Opportunities to help make MayDay thrive are abundant and you may find information and contact details at HBOT.org or call 612-721-2535 x14.

Meanwhile two free open workshops on Tuesday (April 27) and Thursday (April 29) from 7 p.m. to 9 p.m. would allow you an opportunity to refine your impulse for supporting MayDay. You may be awed by one parade section’s display or ingenuity. Or you may just know your abilities will embellish an already exquisite statement. You may just say yes, “Yes I support this work”, and find your own way to contribute. Get out in the world. Enjoy yourself. Have fun, be safe and love one another.