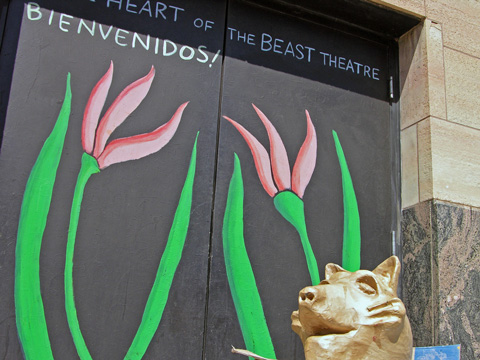 There are still appeals for participants in any and all of MayDay. After this week of workshops, rehearsals for the Ceremony will commence. So if the Ceremony stage is your aspiration, you need to join in quickly. For pageantry of a lower key, you will still want to stop in to get an idea of the costuming themes that are developing.  Making a mask for your Parade Persona may take a few workshops. There are unlimited number of opportunities to Parade, and a great number of volunteer positions far from the glare of the spotlight. Help Build MayDay with your unique contribution. Consider this an invitation;

You get to dress fancy + have fun In this section;
you can be a GRAMMA or GRAMPA (mask)
or
a BEAR or OWL Grandparent
or
an ANCESTOR ANIMAL of your choice
we need some people!
The public workshops of MayDay are invitations to join a crowd of well wishers. During this April, each Tuesday and Thursday from 7-9pm and Saturdays 9-11am (mornings), and 1-3pm (afternoons), the artists at In The Heart of the Beast Theatre (HOBT.org)  welcome you to come and help make MayDay. There are two parts; the MayDay Parade; followed the MayDay Ceremony; and the entire day in Powderhorn Park is the MayDay Festival. You may parade down Bloomington during the Parade,  be a parade spectator and just partake of the Festival on MayDay. MayDay is an immense community effort guided by In the Heart of the Beast Puppet and Mask Theatre. The hobt.org website has a whole page of volunteer positions and suggestions. You can Build MayDay. Following are some images of volunteers who helped Make MayDay in past years.

There are trucks to be loaded and unloaded both before the MayDay Festival and right at the end of the day. Setting up and taking down booths. Block sponsors and Parade Marshals assist the paraders and the spectators in enjoying the day safely. Assist in one of the HOBT MayDay booths. Positions, such as Sun Runners, may still be available, and of course the pageant audience is open to everyone. Some of the most wonderful volunteers are those who help with cleanup. Together, all the volunteers Make MayDay. Some photo essays from previous years;

MayDay 2012 will try for the Second Sunday of May